Midtown is an increasingly dense urban place, with sleek new towers going up in every direction you look. Although we’re proud of our district’s transformation, Midtown Alliance also recognizes that it is also important to create street-level outdoor spaces for people wherever we can — as well as to preserve historic areas that are left in our city.

With Commercial Row Commons, the public plaza that was just completed at the corner of Peachtree Street and Peachtree Place, we were able to do both.

Built in 1923, Commercial Row represents the unique character of Atlanta’s northward development along Peachtree Street. As the area changed, from charming residential enclave to popular shopping destination to the epicenter of counterculture, Commercial Row continued to serve Midtown. Over the years, Commercial Row’s tenants have included a drug store, a dress shop, a tailor, a bootery, a flower shop and now, Savi Midtown and Cafe Agora.

Both of these businesses offer outdoor seating that is enjoyed by residents, office workers and visitors alike, but previously, these tables and chairs impeded pedestrian traffic due to the narrow pathway. By trading a handful of on-street parking spots to widen the sidewalk and improving the alignment of Peachtree Place’s median, this project has created a more active space that serves people walking, retail patrons and others through a range of uses. 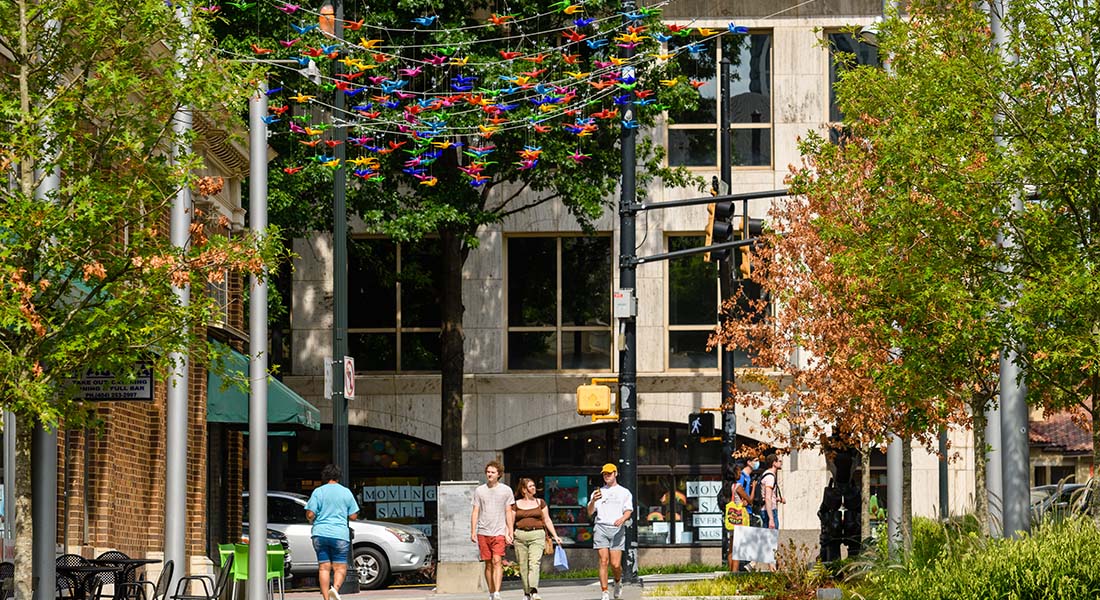 Located adjacent to the Midtown campus of Atlanta History Center, which owns the Commercial Row building, the new plaza is also home to a flock of colorful birds suspended overhead by a catenary system. These swallows by Cracking Art traveled all the way to Midtown from Milan, Italy, as the first in a series of ephemeral installations intended to delight pedestrians and inspire the community. Even though they are wild creatures, swallows are known to build nests on residential rooftops, suggesting they are comfortable cohabiting with humans and sharing space in domestic environments. The swallows will be on view at Commercial Row for up to a year, and then we will rotate them out for an all-new installation.

On the street corner fronting Peachtree, we worked with the City of Atlanta Mayor’s Office of Cultural Affairs to find a permanent home for “Sole Sitter,” a bronze sculpture by Wille Cole that was acquired by former Mayor Kasim Reed’s administration. It depicts an abstract seated figure, meditatively resting its head on its hands. At first glance, the piece appears to be made of a series of geomorphic shapes. After a closer look, it’s evident that the shapes are larger than life shoes. “Sole Sitter” is inspired by the aesthetics of the Luba people, an ethnolinguistic group indigenous to the south-central region of the Democratic Republic of the Congo.

Commercial Row Commons may not be a large plaza, but these are victories that add up — small but mighty enhancements that will provide significant improvements to public life. We’d like to thank the City of Atlanta, Sylvatica Studio, Flippo Civil Design, JHC Corp. and construction project manager Bruce Pinkney for helping make this project possible.

We welcomed City of Atlanta and Atlanta History Center leaders to the plaza for an opening ceremony on August 3. But the biggest celebration is yet to come, and everyone’s invited. On August 18, we will host a Community Launch Party with drinks, food, live music and more. We hope to see you there!