John Ahman, CEO of the Westside Future Fund, speaks to the Transform Westside Summit on Jan. 20 (Photo by Maria Saporta)

Back in the early 1960s, the historic Westside neighborhoods that are the focus of the Westside Future Fund had a population of about 50,000 people. By 2010, population estimates had dipped down to 15,000.

A fundamental goal of the Westside Future Fund, created in 2015, has been to reinvigorate the neighborhood by attracting new residents while retaining existing residents, including renters and legacy homeowners.

It’s a delicate balancing act. How can one revitalize a community without displacing legacy residents because neighborhoods have become unaffordable?

The lessons learned on the Westside are especially relevant given Mayor Andre Dickens’ focus on Atlanta’s neighborhoods. On Jan. 21 at Booker T. Washington High School, the mayor held his first Summit on Neighborhoods, an effort to strengthen the city from a grassroots level.

A good model is the Westside Future Fund, which is backed by some of Atlanta’s top philanthropists — from Chick-fil-A’s Dan Cathy to Atlanta Falcons owner Arthur Blank — as well as major foundations, corporations, the City of Atlanta and the Atlanta Housing authority. 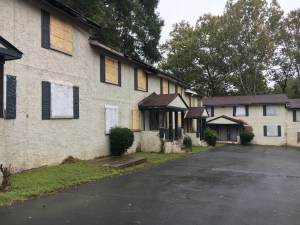 The WFF is still a work in progress, but it is a good time to take a snapshot of how it’s doing and what ideas are replicable to other Atlanta communities.

In fact, on Jan. 20, the Transform Westside Summit took an opportunity to shine a light on the work that WFF has accomplished since 2016. 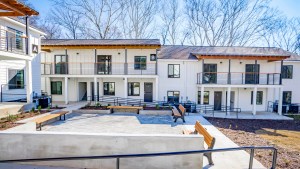 After: A renovated 395 James P. Brawley Drive now has 31 units, including a 3-bedroom and 2-bathroom unit. (Special: Westside Future Fund.)

The summits began in 2017, and more than 10,000 people have attended the summits over the years. They have been a critical element in the evolution of WFF by bringing together a wide array of people twice a month to get to know each other and learn about Westside as well as other community partners.

A major WFF goal is to maintain affordability for legacy residents, the Westside communities – which include Vine City, English Avenue, the Atlanta University Center Neighborhood, Ashview Heights and Just Us.

John Ahmann, WFF’s president and CEO, said that so far, WFF has 219 units in service; 153 units in development and another 304 anticipated for future development, provided that money is raised to help finance those units. That’s a total of 676 units – 454 multifamily and 222 single-family – towards a goal of 800 units. 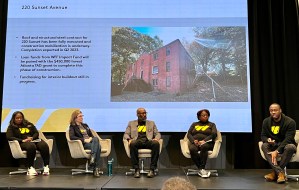 In addition to WFF’s work, Ahmann shared that other community partners have been hard at work preserving 482 units already in service with another 783 units in development. Of this total, WFF’s Impact Fund helped to finance 505 units.

To date, the WFF has commitments of $33.8 million in charitable funds to help retain deep affordability in the neighborhoods. Preference is given to people who already live or work on the Westside as well as graduates of Booker T. Washington or Atlanta’s Historically Black Colleges and Universities.

Among the tools WFF offers thanks to its charitable funds are down-payment assistance for homebuyers as well as funds to cover the rise in property taxes for legacy homeowners.

So, what does long-term success look like to Ahmann?

“I can imagine up to 40,000 people living in these neighborhoods, yet the character of the neighborhoods would be preserved,” Ahmann said. “We would see mixed-income, mixed-use at a neighborhood level. There would be housing for all with deep affordability up to market rates.

When neighborhoods are repopulated, we should ensure that units are still affordable.”

Success would include “permanent” affordability, which most often requires a nonprofit owning the land and being committed to keeping rents or housing prices low.

“We are a people-focused not-for-profit,” Ahmann explained. “I’m in a role that allows me to make a positive contribution to the community. I want to make a difference in a city that has had historic racial inequities for a long time.” 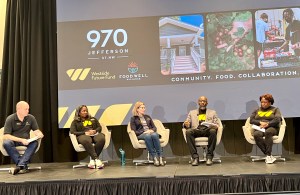 Ahmann actually moved to Vine City a few years ago, a testament to his commitment to the communities. He often imagines Martin Luther King Jr. and his wife, Coretta, at their former home on Sunset Avenue standing on the front steps and looking at the progress in the community.

Housing and neighborhood development clearly is a centerpiece of WFF’s work.

“Our strategy is to buy as much land as we can to reach our goals,” Ahmann said. “Thanks to support from our Impact Fund, we have spent approximately $20 million on land acquisition. We have a total of about 36 acres slated for single-family, multi-family and mixed-use development.”

The privately backed WFF Real Estate Investment Fund, founded in 2018, also provides funding for projects, and investors will get their money back over 15 years with no return on their money. 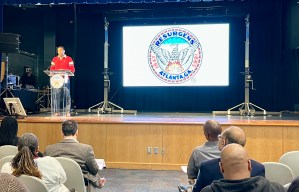 “You have to focus on housing, but it’s only one piece of the puzzle,” said Eloisa Klementich, president and CEO of Invest Atlanta. “Jobs, neighborhood development, public safety, education are all components.”

When the Mercedes-Benz Stadium was being developed, Invest Atlanta wanted to help make a difference, contributing millions of dollars to the Westside. “From the beginning of the Westside Future Fund, we really formed a partnership,” Klementich said. “It’s going to take time.”

Given the tremendous support WFF has received, what can be replicated in other communities wanting to be revitalized without displacing legacy residents?

Ahmann said the summits have been key in providing a forum for people to get to know each other and build trust. WFF also is building a core of volunteers, managed by Raquel Hudson, director of programs. In 2022, a total of 744 people volunteered on the Westside. But in just one day in 2023 – the MLK Day of Service, the WFF had more than 900 volunteers. “I’m overwhelmed by what 2023 is going to look like for us,” Hudson said at the summit. 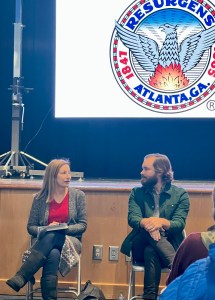 Atlanta Planning Commissioner Jahnee Prince with Matt Bedsole with the city’s Housing Innovation Lab at the Mayor’s Summit on Neighborhoods on Jan. 21. (Photo by Maria Saporta.)

Also, Ahmann said an essential element was designing the Westside Land Use Framework Plan with strong community engagement. It was developed by planner Dhiru A. Thadani working with local Atlanta planning firm APD. The plan was adopted by the Atlanta City Council, giving the community a strong voice as neighborhoods are revitalized.

“The community has said this is how we want to see our neighborhoods grow,” said Ahmann, adding that it’s become a guide for builders on how to design their projects. “The plan also is a way to protect the community from outside predatory developers.”

Atlanta has a total of 245 distinct neighborhoods. At the Summit on Neighborhoods, Dickens called Atlanta “a group project.” He noted that both he and the city’s Neighborhood Planning Units – launched by Mayor Maynard Jackson in 1974 – will turn 50 next year, an opportune time to refresh the system.

Part of the challenge is taking the long view, understanding neighborhood revitalization will not be an overnight success.

“We’ve got some work to do on our group project,” said Courtney English, senior advisor to Mayor Dickens, at the Neighborhood Summit. “That’s why we are together.”

“The good news is that Atlanta has the resources to take on the most pressing issues,” Ahmann said. “Because of the magnitude of the need, we still have a long way to go. But we have a path forward on how to accomplish where we want to go.” 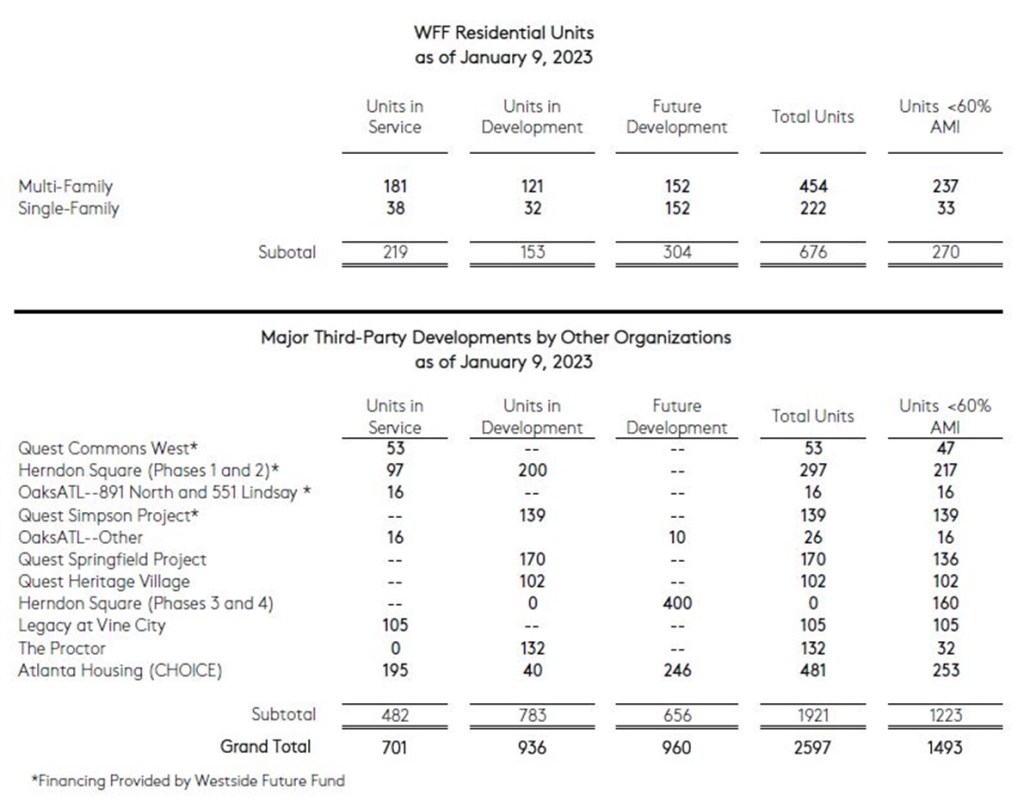 Previous Article
If we’re growing as fast as we can and it isn’t enough, have we had it with growth?
Next Article
Sixty-day comment period opens for controversial mining plans near Okefenokee