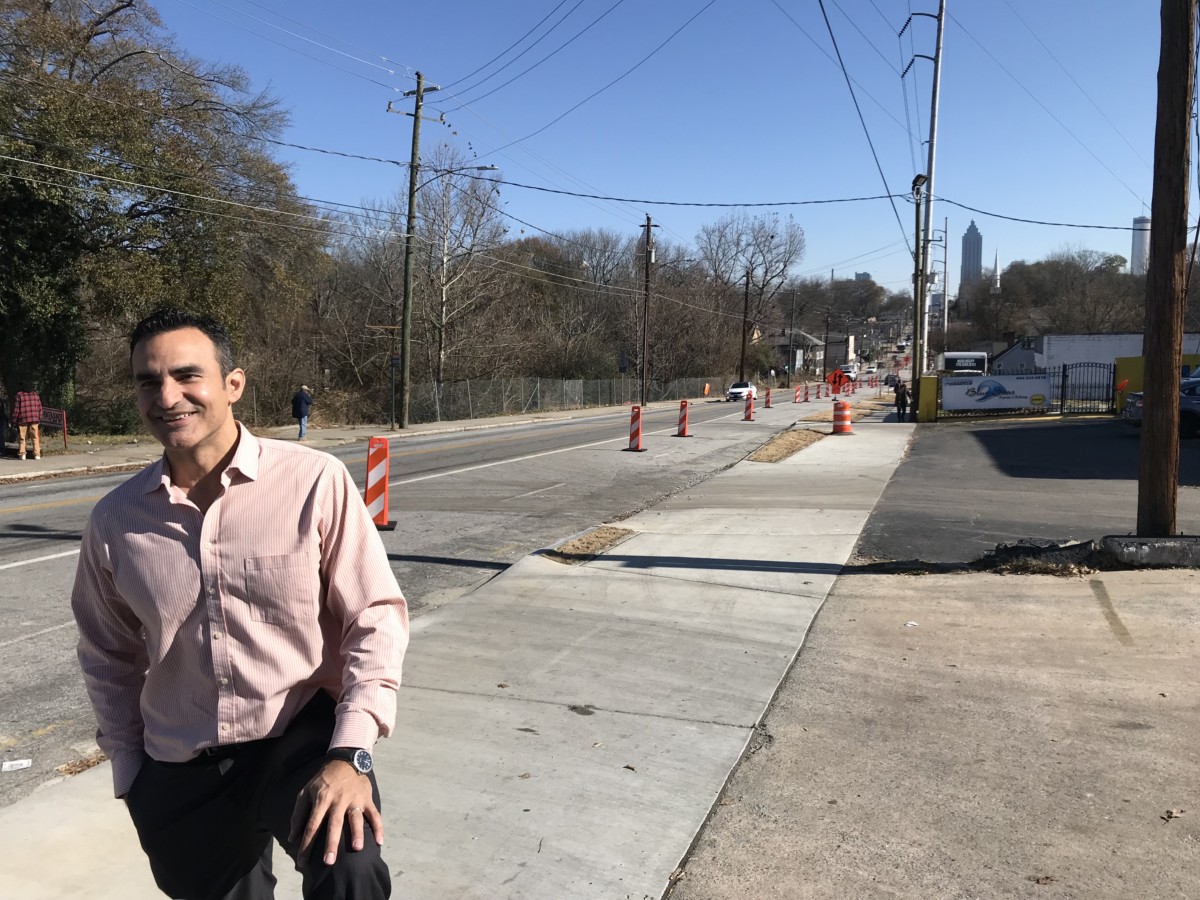 Blank Foundation's Frank Fernandez, during a 2019 tour of the Westside, points to improvements underway ne (Photo by Maria Saporta)

By Maria Saporta
As published in the Atlanta Business Chronicle on Dec. 22, 2017

During a recent tour of English Avenue and Vine City, Frank Fernandez of the Arthur M. Blank Family Foundation highlighted numerous initiatives that have begun to take root on the Westside.

A former check-cashing business is being transformed into a restaurant. Several vacant lots have been turned into neighborhood parks. Police officers are moving into the neighborhood thanks to an initiative of the Atlanta Police Foundation. Westside Works has a new home where it is training residents in the fields of construction, heath care, culinary arts and soon childcare. 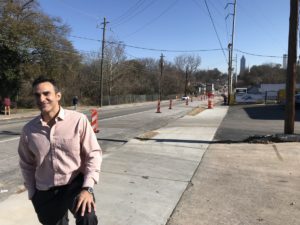 Blank Foundation’s Frank Fernandez, during a tour of the Westside, points to improvements underway (Photo by Maria Saporta)

There are so many partners, initiatives and projects are underway in the communities west of the new Mercedes-Benz Stadium, it’s impossible to mention them all.

“There’s a lot of positive activity going on, but there’s a long way to go,” said Fernandez, who moved to Atlanta four years ago to coordinate the Blank Foundation’s efforts on the Westside. “There exists a tangible threat of gentrification.”

The Westside efforts were kicked off when the Blank Foundation announced a $15 million prosperity fund to be spent on revitalization initiatives in Vine City and English Avenue. In September, Atlanta Falcons owner Arthur M. Blank announced that it would be investing another $15 million in those communities.

“Our original $15 million will be fully committed by the end of this year,” Fernandez said. “We will begin spending the second $15 million at the beginning of the new year.”

And the Blank Foundation also has invested an additional $7 million in the community from its related entities, such as the Atlanta Falcons and its community efforts.

In all, the Blank Foundation is investing $37 million in the Westside – and it is showing no signs of slowing down.

Arthur Blank has said that just building a new stadium was not enough. Success would be defined by transforming the adjacent neighborhoods, which have been in decline for decades.

“We believe in the greatness of these Westside neighborhoods, and in the future of the Westside as a place that embodies Dr. King’s Beloved community,” Blank said in statement. “We know there is more work to be done, and we are committed for the long term on working with residents, civic leaders, and other organizations to create positive, impactful change while supporting the cultural and historical preservation of these Westside neighborhoods.”

Fernandez identified the multiple tracks and strategies that are underway.

In the short-term, the Blank Foundation has focused on jobs, public safety and education.

Westside Works has trained nearly 500 people from the surrounding neighborhoods and placed them in jobs. There’s an 81 percent job retention rate after one year. About 150 of them now are working in operations at the Mercedes-Benz Stadium.

In public safety, the near-term advances are numerous. In addition to security cameras and police officers living in the community, a host of partners helped create the At Promise Youth Center to provide services to help young people stay out of the juvenile justice system.

And the short-term education efforts have centered on the Atlanta Public Schools’ Michael Hollis Innovation Academy, which has received strong support from the corporate and philanthropic communities.

At the same time, the Blank Foundation has launched four long-term “collaboratives” that each have multiple partners seeking to tackle deep-seeded issues that have impacted the communities for decades.

Much of the Blank Foundation’s work has been on building human and social capital – seeking to nurture community leaders to be engaged in the area’s problems and solutions.

La’Teef Sanyika Majaliwa, a Vine City resident since 2006, said he has been partnering with the Blank Foundation ever since he moved to the area and became a community barber.

“I’m known for being a mentor to the kids in the community,” said Majaliwa, who described himself as being an “active” and “nosy” neighborhood leader. “I definitely see change that’s happening.”

But the threat of gentrification is real.

“I know the future might not include many of the neighbors and residents who have been here for years,” said Majaliwa, a homeowner who is trying to help people and businesses stay in the community despite increasing property values. “I plan on raising my kids in this community.”

Another challenging issue is historic preservation. The Westside includes a number of historically-significant buildings that are in a state of deterioration and in dire need of rehabilitation. That includes the historic Gaines Hall, Fountain Hall, the Paschal’s Restaurant and Motor Lodge, churches, the English Avenue School and homes throughout the communities.

“There are so many historic preservation opportunities that are not moving forward. Everyone is supportive but there’s not a plan in place,” Fernandez said, adding that several properties have been involved in lawsuits and are owned by anchor institutions. “The politics around all of that is really tricky.”

What is working is the Blank Foundation’s partnership with the Westside Future Fund and the Chick-fil-A Foundation.

“I’m delighted with the progress we are making,” said Dan Cathy, CEO of Chick-fil-A Inc., who was an early champion of transforming the Westside and credited Blank his vision. “Not only have we been building infrastructure, we are building trust. People are seeing results.

Last February, Arthur Blank hosted a dinner for all of the stadium’s corporate partners, and he had the Westside Future Fund outline all the ways they could invest in the adjacent communities.

As a result, an additional $15 million has been raised to invest on the Westside – everything from developing new parks to buying blighted properties to building health clinics and developing urban farms.

“Working with the Blank Family Foundation has been terrific,” Ahmann said. “We are very grateful to Arthur Blank, who back in 2013 said we want to refocus on these neighborhoods – to call everyone to action.”