What Dragon Con can teach us about energy policy

In a political year like this one, everyone needs a little escape. Enter Dragon Con and the thousands of costumed characters that invaded downtown Atlanta on Labor Day Weekend.

While there are plenty of Disney princesses and Batmen, some of the characters had some “energy-related” superpowers, and I was thinking how much they could help our grid if I could only turn them into energy assets. Let me explain…

Let’s start with Captain Atom. Facing a death sentence, he opted to become the Air Force’s Captain Atom as his punishment. Through this experiment, he was encased in metal which gave him a quantum field allowing him to absorb and utilize energy. If alive today, he would be an asset to us each afternoon much like our massive South Georgia solar fields are. We could release his energy each day during our peak load. That would save us all money. 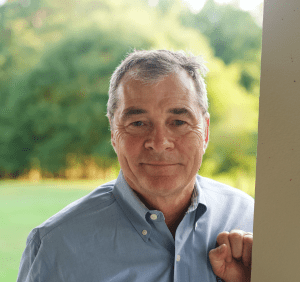 Or maybe Lucus Bishop. This X-Man hails from 1991 — and you see a few of him at Dragon Con. His power allows him to release any of the energy he has absorbed in small or large amounts. Sounds like a battery to me, and our PSC is working with Georgia Power to greatly expand our grid-tied battery system to create more reliability. And because Bishop has the ability to control the amount of energy that is released — he would be what we call “dispatchable” in the energy world and a great asset to the grid — especially during extended outages due to weather events.

How about another X-Man from the 90s — Gambit. He had the ability to “charge up” objects, even to the point of making them explode. And while I don’t want any explosions out there on the grid, Gambit could really help with EV charging and the tremendous growth we are seeing in this space. With all the incentives coming out of Washington, Gambit could be a real boost to our charger network in rural areas. If only we could duplicate him thousands of times.

You have no doubt watched “The Lord of the Rings,” but have you seen the ring worn by the Green Lantern characters? The rings of various colors allow the wearer to create new energy constructs including kryptonite. This reminds me of the incredible energy resident in nuclear material and how so little can produce so much. Vogtle Three is 100 percent complete and fuel loading begins next month. Altogether, the Vogtle units will power about one-tenth of Georgia and will be the largest power plant in North America. The Green Lantern would be proud.

Starfire may be a Dragon Con character you don’t know, but she has the ability to manipulate ultraviolet energy, absorb it, and then emit that energy in a supernova-like wave. This reminds me of where hydrogen is going as an energy carrier. There is nothing being talked about more than hydrogen and its potential for blending and transportation. And Toyota is pioneering this effort in their hydrogen fuel-cell vehicles in Japan.

Space will not permit me to go into all the characters at Dragon Con that have energy-related powers, but you can check out Cyclops, Thor, Nova, Shockwave, The Ray, Shatterstar, Black Lightning and Cyborg. 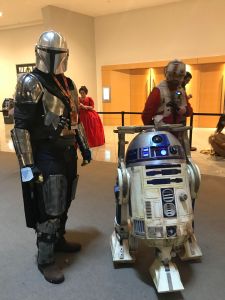 R2D2 of Star Wars fame being escorted by a Mandalorian. (Photo by Annie Echols.)

Or better yet, join me and my daughter at a Dragon Con — held every Labor Day Weekend. The annual festival, founded in 1987, prides itself on being the largest multi-media, pop culture convention focusing on science fiction, fantasy, gaming, comics, literature, art, music, and film in the universe. And it all happens right here in Atlanta, consuming five of our biggest hotels and the Apparel Mart.

Lines form outside the popular ballroom sessions and literally wrap around the buildings. On any given day, there are over 50 seminars going on simultaneously throughout five hotels and the mart — with every meeting room being used. This is way more than a costume party. Whether you like those energy superheroes, the Muppets or Mr. Spock, there is something for every fan.

As for me and my daughter, we are both a little geeky, and you almost have to be to fully enjoy all that Dragon Con has to offer. Who knows, maybe they’ll let me do a session on the energy of the future? There will certainly still be energy commissioners in the future… in my dreams, you say.