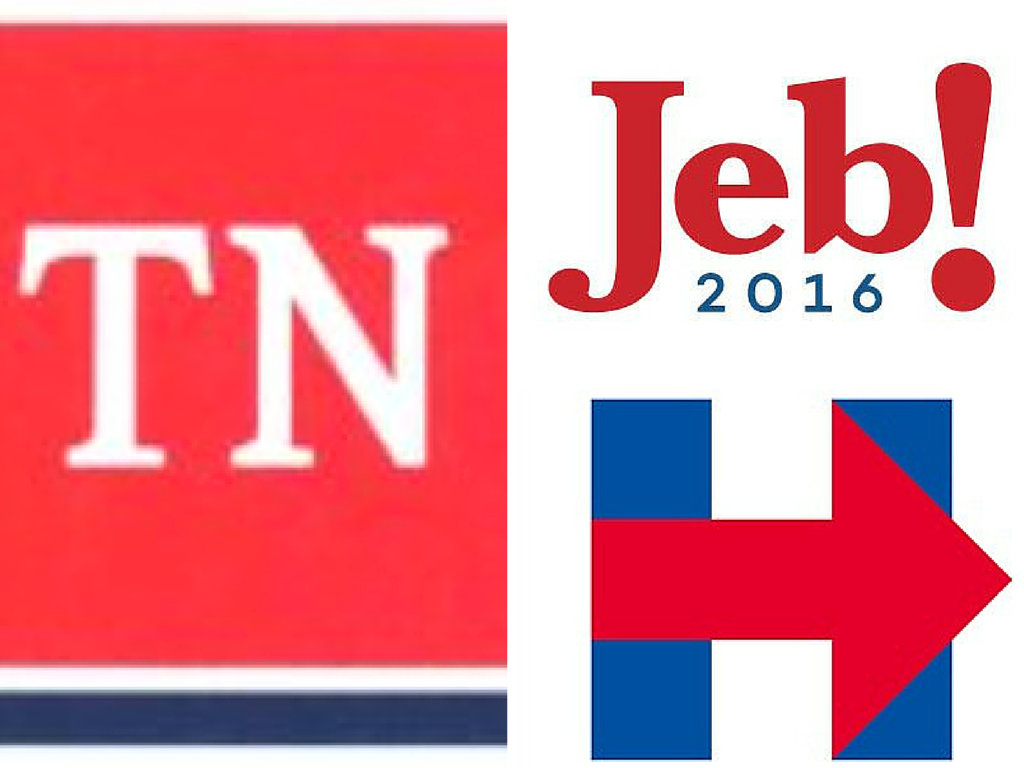 Would a soft drink taste as sugary, or the engine of an expensive car hum as seductively, if it didn’t have a logo to burn its brand into our consciousnesses? Would we feel like we’d voted if we didn’t stick that peach on our chests?

This is not an idle question in Tennessee, where Gov. Bill Haslam touched off a furor when he announced that there were too many logos for various state agencies, and all would be consolidated into a single logo for Tennessee state government.

The new design is the capital letters “TN” in white on a red background, with a narrow blue border underneath. It was created by a Nashville firm which received $46,000 for the work.

No one has mentioned this in print, but for starters, choosing the University of Alabama’s school colors for a state so dominated by orange was not, at the subconscious level, the best design decision. It’s intended to be a deconstruction of the state flag,  but this only stirred indignation. Some state commissioners, loyal to their old logos, were said to be chafing under the edict, and the Tennessee Watchdog site soon found that the state has eight graphic designers and artists on its payroll who presumably could have done the work.

Tennessee, more than its neighbors, has had a number of governors in recent decades who were skilled in finessing just such volatile situations. Haslam is of that strain.

“I get it, that’s something people can understand and say, ‘Why’d you pay $46,000 for something that I could have done at home?’” Haslam said last week.

I get it. You sit there and say, that’s exactly what Don Draper would have said. Own the controversy. To be effective, a logo must be some combination of presentation and emptiness, to allow consumers room to connect a unique identity to the brand. Haslam embraced his emptiness.

“I think part of the idea is to have a consistent brand across state government. There are some people who might not like that brand, but that becomes a question of choice,” he said.

The importance of logos has not gone unnoticed in the presidential race, either.

Hillary Clinton’s campaign has made the decision to go all-in on a logo-ized “H” consisting of two blue columns crossed by a big red arrow pointing right.

Interesting choice, for a Democratic candidate trying to hold on to the liberal wing of her party. But the Clinton campaign is owning it in a big way, using the logo as the design for the campaign stage it rolled out Sunday in the former secretary of state’s announcement rally. The logo is also being morphed into versions tailored for the various battleground states, gay voters and so forth.

Could the big red arrow presage a directional turn, once Bernie Sanders is out of the way and the race moves into the general election campaign? Watch this logo for further developments.

Ahead of his announcement rally Monday afternoon, Jeb Bush’s campaign released his logo over the weekend: “Jeb!” in red, jauntily placed over “2016” in blue. The absence of his last name has drawn much analytical attention, although it should be said that Bush’s logo supplies two more letters of self-identification than Clinton’s.

But for any veterans of Lamar Alexander’s 1996 or 2000 campaign, what caught the eye immediately was that exclamation point. Turns out the same consultant, Mike Murphy, had a hand in both.

Here again, the design team might want to consider some morphing opportunities as the campaign goes along. Someone has already thought of “!Jeb!” for Hispanic voters. For undecided voters, “Jeb?” might be more subtle.

A big announcement could be branded with “Jeb:” And if, when the big money kicks in, the campaign finally finds its legs, it could be announced with a simple, declarative “Jeb.”