Why does a Moreland Avenue mega-project keep ignoring a mixed-use vision?

The Moreland Plaza shopping center at Moreland and Custer avenues as it appeared in 2021. (File Photo by John Ruch.)

Fifteen years ago, the Southeast Atlanta and DeKalb County neighborhoods along south Moreland Avenue envisioned a more pedestrian-friendly, community-oriented future. They and a consultant team published a report of mixed-use concepts that have proven influential on several redevelopments in the suddenly booming corridor of strip malls and industrial sites. 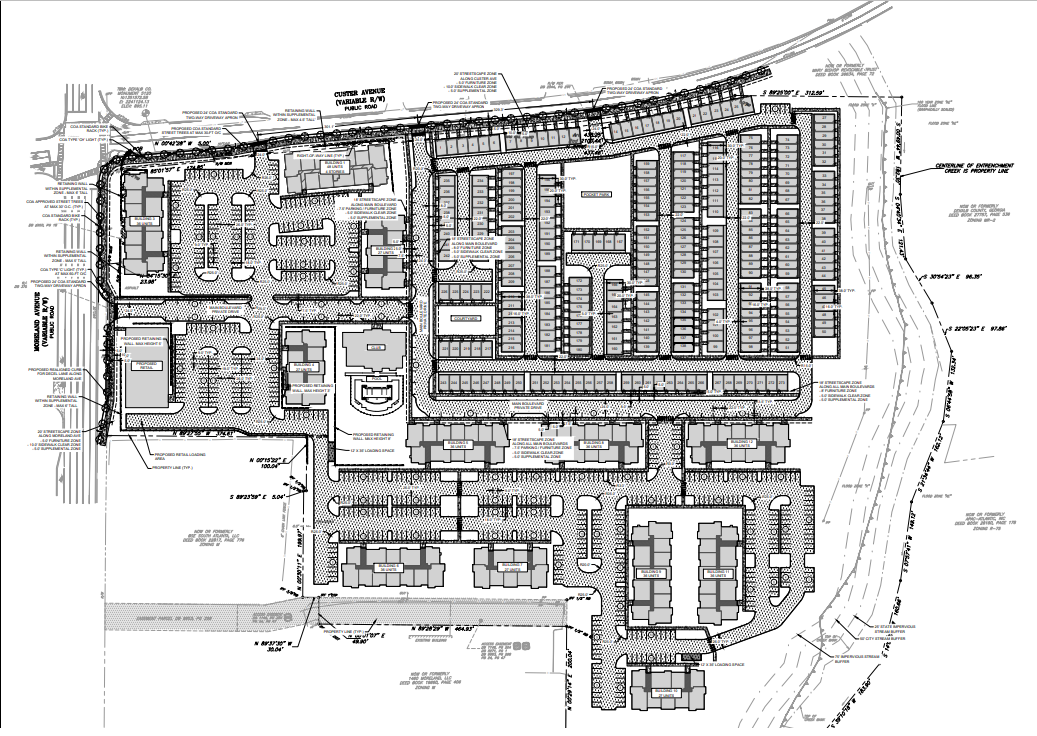 The site plan for Empire Communities’ proposed redevelopment of Moreland Plaza. Moreland Avenue is to the left, Custer Avenue is at the top, and Intrenchment Creek is at the right.

Now the corridor’s first mega-site to come up for redevelopment since then, one that could make or break much of the vision, is on the drawing board: the 30-plus-acre Moreland Plaza strip center at Moreland and Custer Avenue. Yet the proposal largely ignores the vision of new street grids and parkland, basically replacing 1960s-era suburban sprawl with the 2020s version.

Resistance from Atlanta’s Neighborhood Planning Unit W is reportedly helping to spark design changes that might be unveiled next month. But this is the second time in as many years that a developer has proposed a Moreland Plaza makeover far removed from the community vision laid out in that 2008 report, the South Moreland Livable Centers Initiative (LCI). Is there a way to put more leverage behind its vision, more power in community hands, more free advice on the table? 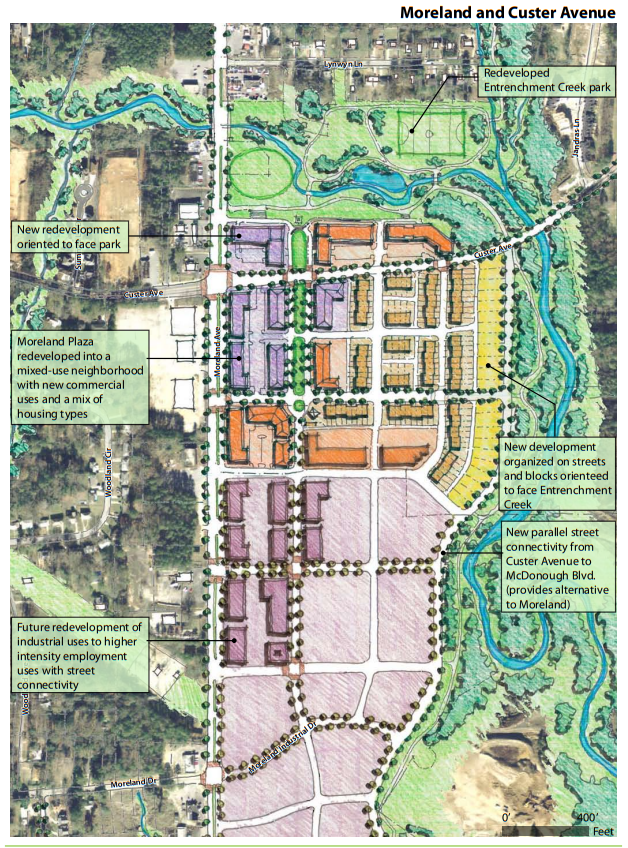 Those are the sorts of questions getting chewed over by Ron Lall, who worked on the LCI back then and now chairs NPU-W. He calls the Moreland Plaza situation “puzzling.”

“We understand that we are at the beginning stage of discussions here, so we’re not running around with our hair on fire or anything like that,” Lall said. “…it’s just — hey, we invested a lot of time in that LCI process. So for it to be cast aside or for the City to tell us it just doesn’t have the teeth we need, then those are the things we need to take a look at and learn from… and rectify the situation.”

LCIs are studies funded by the Atlanta Regional Commission (ARC), a multi-county metro planning agency, to come up with redevelopment visions that emphasize a reduction in private vehicle use and walkable, healthier communities. The South Moreland LCI — focused on Moreland roughly between I-20 and Constitution Road — was a bit ahead of its time in focusing on mixed-use redevelopments combining homes and commercial spaces, partly in the hopes that residents would have more opportunities to walk or bike to shops.

LCIs get most of their teeth through new zoning ordinances. On South Moreland, that started a decade ago with mixed-use codes following concern about a planned QuikTrip gas station at Moreland and Ormewood Avenue. After that plan fell through, the LCI got what Lall calls its first win by replacing it with a residential development instead as allowed under the new mixed-use code.

Other LCI success stories have followed. A mixed office/residential/retail complex called Halidom at Moreland and Lynwyn Lane just received a phase-one ribbon-cutting. Near Moreland and United Avenue, a team of developers who live in the neighborhood is working on an 11-acre mixed-use project called Skyhaven Quarry that is being planned through intensive community engagement.

The LCI report anticipated much larger projects as well. Moreland Plaza, known for its former Value Village thrift shop, was one of them. So was the nearby Starlight Drive-In movie theater. The report called for dense, roughly balanced mixes of homes and businesses on a new internal street grid connecting such mega-parcels. Also recommended was new parkland along Intrenchment Creek, a tributary of the South River that runs behind the properties, and development oriented toward it. Such a park concept is all the more important now that planning is about to begin on the South River Forest, a green space network that includes the creek among many other areas. 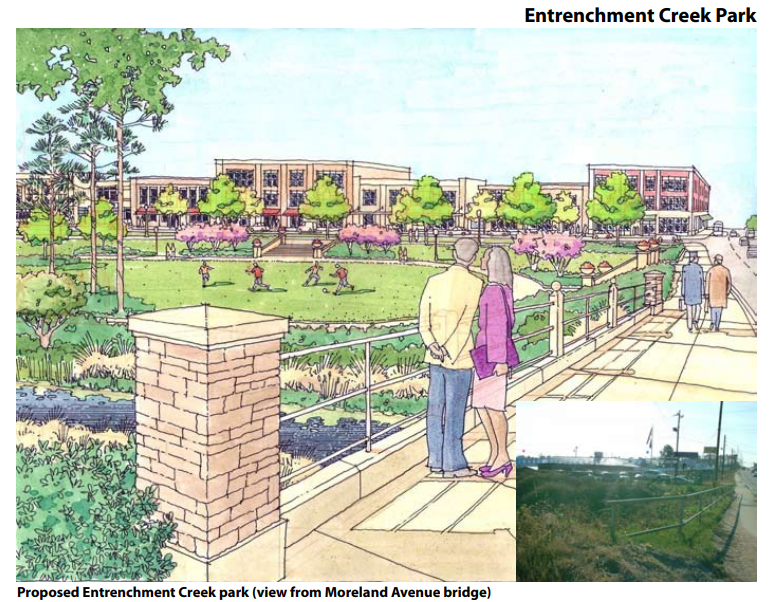 A vision for a park along Intrenchment Creek (here named with the alternative spelling “Entrenchment”) in the South Moreland LCI study.

In 2015, the long-struggling Moreland Plaza was bought by Atlanta-based Stream Realty Partners, which began giving vacant space to arts groups as a placeholder for redevelopment. In 2018, Stream got the property annexed from unincorporated DeKalb into Atlanta, and thus into the LCI’s mixed-use zoning. The annexation ordinance stipulated a variety of the mixed-use requirements, as well as such features as building materials and an affordability requirement for housing on the site.

Yet when the first version of a redevelopment plan popped out last year, via Stream and Alliance Residential Company, it was more like a suburban subdivision with some token retail space thrown in as a nod to mixed-use. Most of the LCI concepts weren’t there in the plan for more than 540 housing units and around 11,000 square feet of retail. In a state “Development of Regional Impact” review required due to the potential traffic impacts, the ARC critiqued the project as incompatible with the LCI, “best practices for mixed-use design,” and the City’s pedestrian-friendly guidelines. The plan was quickly withdrawn.

Under City code, such a project in a mixed-use zone requires a special administrative permit (SAP), an internal review that requires only an informational notice to NPUs, not a full review. Lall was not chair at the time and said he never even heard of the project before it made the news. He is unsure whether NPU-W submitted any comments about it.

NPU-W is certainly aware of the new plan from homebuilder Empire Communities that was filed early this year. In comments to the City, the group said it’s basically the same as the previous plan, only worse.

The plan calls for 681 homes — 273 townhomes and 408 in apartment buildings — along with about 12,000 square feet of retail space. It provides 1,255 motor vehicle parking spaces —far more than required — and 50 bike parking spaces, the minimum required. In addition, the developer is asking for eight zoning variations, including shallower residential lots, higher retaining walls, new driveways and surface parking fronting on the street. There’s no mention of the affordability requirement one way or the other.

“What is proposed on or done on one of these properties can and will affect the possibilities and opportunities on other adjacent parcels,” the letter warns about the LCI’s context.

Lall calls the plan a car-oriented “throwback to a 1960s mentality that is not going to serve us very well.”

Stream and Empire did not respond to comment requests, but Lall said they are responding to NPU-W. He said their attorney has agreed to a meeting, likely in late April, and apparently after changes are made to the site plan.

In that sense, it sounds like the system is working. But Lall wonders if there’s a better way for such a keystone property to be reviewed and controlled, especially one with such high-profile factors as size, LCI coverage and the recent rezoning. Maybe LCIs could include detailed zoning ordinances that get adopted by the City along with the report, he suggests, and maybe NPUs could gain more of a hand in the SAP process. A Department of City Planning spokesperson noted that tying the zoning to a site plan is the way to have such detailed leverage right now, and Moreland Plaza’s zoning was not done that way. 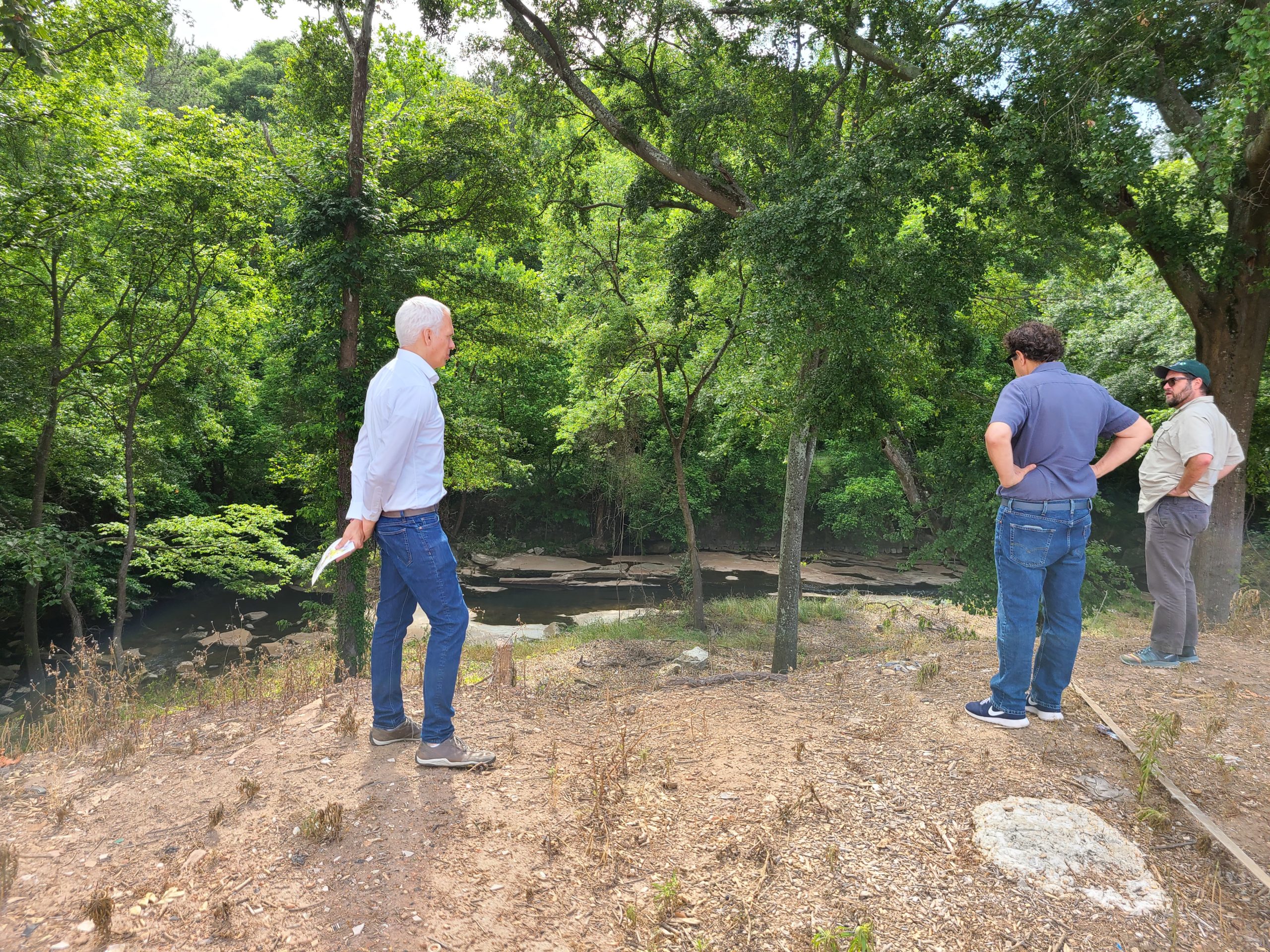 Urban planner Ryan Gravel, left, known for his work on the Atlanta BeltLine, leads a 2021 tour about the South River Forest Plan on an embankment behind Moreland Plaza overlooking Intrenchment Creek. (File Photo by John Ruch.)

Another factor might be bridging the culture gap between two Atlanta real estate forces: cookie-cutter developers and public-intellectual urban planners. Lall notes that at Moreland Plaza, two developers have skipped the opportunity to use the free design work in the LCI report as a “springboard.”

“I think this was a situation of a developer playing to their strengths rather than playing to the strengths of the site,” said Lall of the current version. He suggests that developers of such prominent sites consider working with an urban planner to get a bigger picture. That might be “outside their comfort zone,” he acknowledges, but adds that when it comes to reducing car-oriented development, “one way or another, climate change is going to take us all out of our comfort zones.”

Lall notes the area is home to a number of prominent urban planners, like Atlanta BeltLine guru Ryan Gravel, who is also working on the South River Forest and leads tours that include Moreland Plaza’s view of Intrenchment Creek. Or Georgia Tech’s Ellen Dunham-Jones, who literally wrote the book on remaking old-school sprawl in “Retrofitting Suburbia.”

“So that’s what’s in the air in Atlanta, and then this what we get,” Lall said of the Moreland Plaza plan. “…that’s a part of the frustration we feel, is we have all these resources right here, and still — crickets.”

Correction: A previous version of this story said the ARC “recommended denial” of the first version of the Moreland Plaza redevelopment in a Development of Regional Impact (DRI) process. ARC comments in the DRI process are officially not a recommendation for or against the plan.