Witnessing AIDS in Atlanta: Stories like this needed for living memorial

Atlantans are known for volunteering, but be careful when you help others. You may instead end up helping change your own heart and mind.

As HIV and AIDS swept through the city 20 years ago, volunteers stepped up to make and deliver food to those sick and dying. Those who pitched in on the frontlines are being asked now to document their stories for Project Open Hand organization that pioneered food delivery for AIDS patients.

As Open Hand prepares to double its facility –with 5,000 meals a day, it’s now the country’s largest distributor of in-home nutrition services for people with chronic illnesses – it wants to collect and retell the stories of its history. Photos and stories will form a timeline hallway throughout the larger building, with spaces for remembering loved ones or offering encouragement. 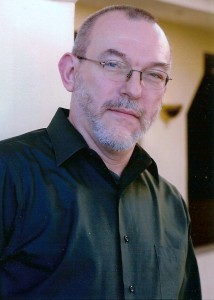 Mike Slater volunteered with Project Open Hand in the early 1990s to serve the gay community.

Because we should never forget, let’s return to that era. The epidemic wasn’t just about a virus. AIDS provoked an epidemic of fear, prejudice and isolation.

Meet Mike Slater, 55, who with his partner, Mark Stevens, moved here in 1987 from Houston. There, 23 friends had died of HIV/AIDS. In Atlanta, they would, in time, lose another dozen.

“In Atlanta, we had an AIDS funeral every month, if you were lucky to have a funeral. Many others died ‘in the closet,’ as if a cloth was drawn across their lives, with no celebration,” Mike recalled when we spoke shortly after World AIDS Day last week.

“That was a big push for me to do something. It might sound parochial, but I volunteered to do something for my community. These were gay people, and I could deliver food, so that’s what I did.”

Project Open Hand had begun in the kitchen of Mike’s church in northeast Atlanta, St. Bartholomew’s Episcopal, where in 1988 they began preparing meals for eight people with AIDS.

By the time Mike raised his hand, Open Hand had moved to an old high school in Little Five Points. The church still provided volunteers, like Mike, who delivered meals in pairs.

Mike was teamed with a naïve woman in her 20s who thought of herself as a do-gooder. “Go with her because she’s a little too delicate for the  neighborhood” where meals were needed, Slater was told. 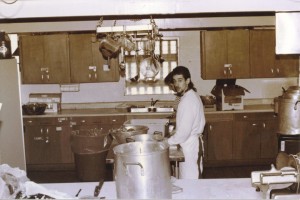 In 1988, Project Open Hand began with meals made for eight AIDS patients in the kitchen of St. Bartholomew's Episcopal Church. (Credit: Open Hand)

Boy, was I ever. For the next couple of years, Mike and I went on a monthly journey to deliver meals to the dying – a mission that taught us both how to better live.

I had never spent any time with an openly gay person. Growing up in a conservative evangelical Christian community, I believed that homosexuals were sinners. Only by repenting and becoming straight could they go to heaven. Being gay was their choice – a very wrong one.

An even higher value, though, was helping those in need. That thrust me, and a big blue cooler of food, into Mike’s Saturn, and sent us touring the virus’ devastating spread – geographic, demographic and psychological.

“Initially our clientele were the affluent gay white men with insurance, right there around Moreland and North Avenues,” he recalled.

“Then it was like someone had flipped a switch, and we shifted south, to Memorial Drive and Kirkwood Avenue – to more heterosexuals, African-Americans and drug users.”

Naïve me expected that each door would be answered by a smiling grateful face. Instead, the only face like that was mine after surviving our rounds.

We set out after our workday, and this time of year, we delivered in pitch dark.

With GPS still years in the making, we fumbled our way down sketchy side streets and long glances of neighbors, vagrants and the occasional mean dog. Every sign told us we didn’t belong there.

“We were going to rundown apartments and houses that had been converted to five-room nursing homes where the lights were never on,” Mike recalled.

Sometimes as we waited for a door to open, we could hear the slow shuffling and gasps.

“The breathing is what I remember,” Mike said. “You’d wonder if they’d even be able to carry the food back to the kitchen.” 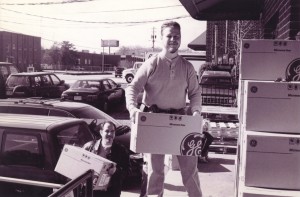 We often met surly recipients complaining about the food quality and delivery time.

In time, Mike and I understood that reaction wasn’t about the food or us, but powerlessness and isolation – “that horrible desperation of being left alone to die,” Mike said.

In time, we realized why our route changed each month: the virus spread to more targets while finishing off others.

“That was the light bulb,” said Mike. “We stopped delivering at an address because that person wasn’t alive anymore.”

Mike and I stayed on the route out of a sense of duty that bridged our differences. We absorbed the loss in different ways.

“I thought I was doing something for my community, and instead I found myself in a totally different community where I had nothing in common,” Mike said.

“I understood the guy on North Avenue, because he was like me…. I didn’t understand someone who got AIDS from a needle. I was like, ‘Whoa, how did I end up here?’ I realized I needed to do it because it needed to be done, even if I didn’t have a personal connection.”

Delivering the meals with Mike, meeting other gay couples – their openness helped reinvent my beliefs about homosexuality. When my cousin died of AIDS, I understood being gay as an identity – not a choice. Figuring out what family beliefs were truly mine made me grow up into my full identity.

Antiviral drugs have, thankfully, helped make AIDS livable for many, though it continues to ravage Africa and places where drugs are not widely available. The scourge left behind many people like Mike, who lost friends to AIDS and other reasons. Mark, his partner, died of a heart attack in 1997.

“You can feel really guilty being a survivor when so many people are gone,” he said. Now 55, “I feel like there aren’t a lot of people to reminisce with, to ask, ‘Do you remember this or that?’ It’s very isolating to be a generation that is so bereft.”

Mike kept reaching out, though. After Open Hand, he volunteered at Jerusalem House, a residence for homeless people with AIDS, and a grassroots advocacy group for universal health care. “If we had some kind of health care that wasn’t based on your job, how many of those people would have lived, or lived better lives?” he said. “Delivering those meals made me more politically aware.”

As a writer, I found myself drawn more to telling stories of recovery, loss, sacrifice and survival.  I understood the need to preserve those stories for future generations. Twenty years ago, we lacked today’s technology that simplifies the recording of daily life. If left undocumented, the stories of Atlanta’s AIDS volunteers – and the important witness to the fear and prejudice of that time — will age and disappear. 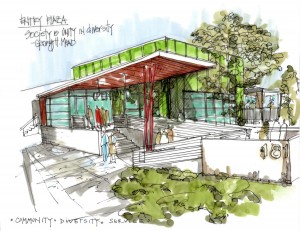 Rendering of the expanded home of Open Hand, where the main hallway will be a timeline of photos and stories from volunteers. Open Hand prepares and delivers 5,000 meals daily as the largest, most comprehensive nonprofit producer and distributor of in-home nutrition services in the nation. (Credit: Open Hand)

We who looked into those gaunt, splotched faces can and should never forget.

Volunteers who wish to share their remembrances of their time with Open Hand (and/or copies of any photos they would like to share) can contact: Matt Pieper, Senior Director of Resource Development; [email protected]; c/o Open Hand, 176 Ottley Drive, NE, Atlanta GA 30324. Please include your contact information.