Women can’t be complacent at this moment in time, panel says 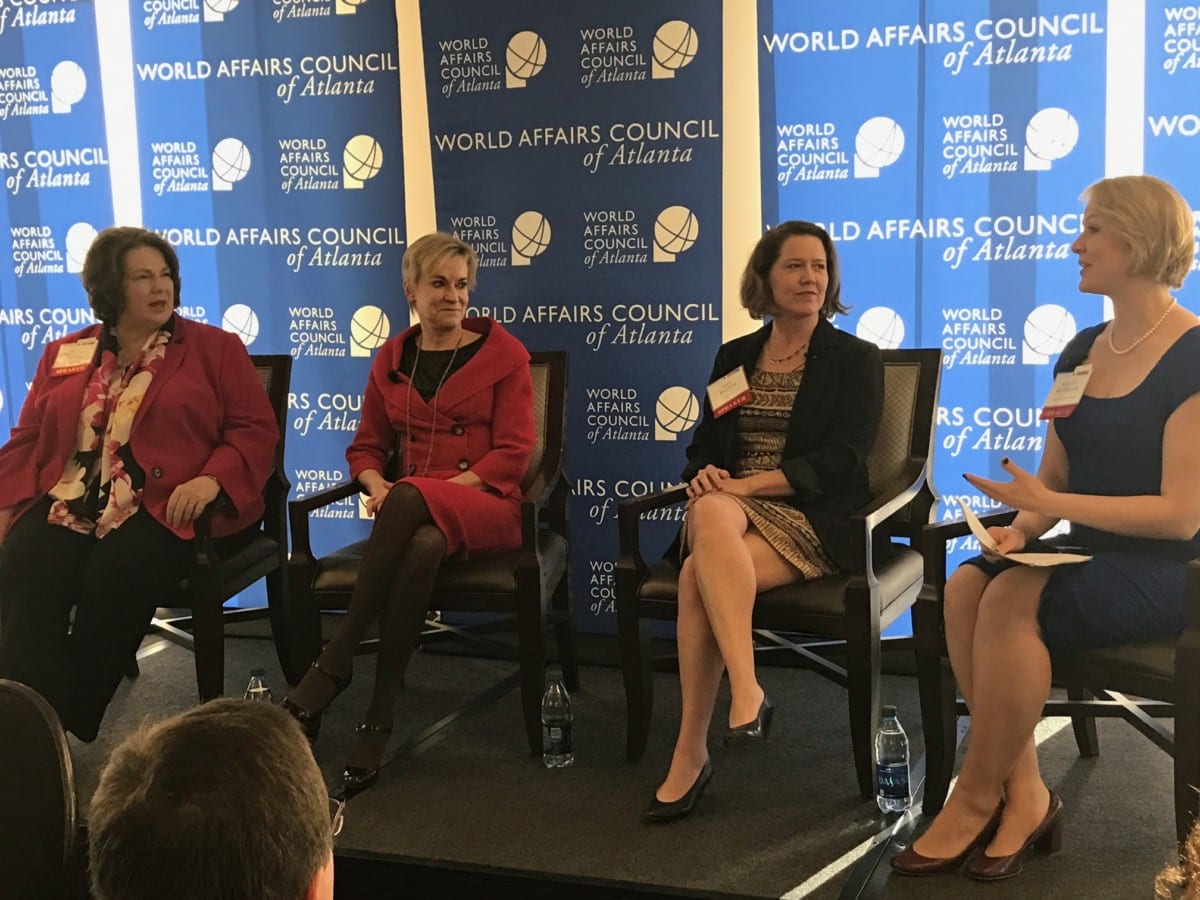 Women must fight complacency to make sure they maintain the progress that they’ve achieved in recent decades.

That was one of the messages that an influential panel of women shared Wednesday morning at the International Women’s Day Breakfast organized by the World Affairs Council of Atlanta at the Commerce Club.

Part of the discussion centered around the last election when there had been an opportunity to elect the first woman president of the United States. 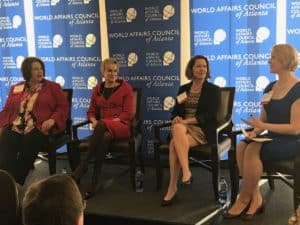 “My daughter was not the least bit excited about the possibility of having a woman president,” said Dr. Amy Baxter, CEO of MMJLabs who also is a pediatric emergency physician. She went on to say that her greatest concern was a sense of complacency among women, especially the younger generations.

“Many of us felt really wounded by the process (of the election),” Baxter said. “Don’t let complacency take over.

Ambassador Mary Ann Peters, CEO of the Carter Center, said the challenges facing women – both at home and abroad – are too great for women to be complacent.

“Violence against women is still rampant around the world and here,” Peters said, adding the incidences of rape on college campuses and sexual assault in the military.

Moddelmog also said that she has realized that “millennial women don’t want to be mentored by women in our age bracket.”

Another area that has distressed Moddelmog is when she explores comments on social media. “I become so freaked out and disheartened by what people will say to each other,” she said.

“I’m concerned about back-sliding,” Peters said. “Women have to own their own dignity. I think a lot of young women dress in such a way that says: ‘I don’t care.’”

Bevington asked the three women if they are different types of leaders than men.

Peter said she does not know if she is a different type of leader than her predecessor John Hardman. But she said she works for a man – former President Jimmy Carter – who along with his wife, Rosalynn has exposed abuses against women around the world.

She called them agents of change who have recognized that women are victims of war.

“There’s the story of how women contribute to peace in the world,” Peters said. “The just solution is also the smart solution. I see my role as taking advantage of this moment in time to move away from abuse.”

Moddelmog said early on in her career when she was president of Church’s Chicken she was a hard-charging executive who probably was “acting more like the typical man.” And she has acknowledged more of her female attributes as she’s gotten older.

“I do believe I lead differently than men do,” Baxter said. “Women tend to approach problems from a care-based paradigm.”

Later Baxter added: “The common theme that runs in all our experiences is empathy.”

The women also shared several gems that are worth sharing with you.

“Always criticize other women in private but praise them in public,” Baxter said.

And Moddelmog said one of her favorite quotes is: “It’s better to let your light shine than curse in the dark.”

This was the 2nd annual International Women’s Day Breakfast put on by the World Affairs Council of Atlanta. The first one attracted about 100 people and this one was sold out with about 250 attendees.

Charles Shapiro, president of the World Affairs Council, predicted there would be even more women and more men at next year’s event.