By Maria Saporta
Published in the Atlanta Business Chronicle on November 7, 2014

After several years of steady gains, the presence of women on the boards of Georgia’s public companies declined in the past year, according the latest annual study by OnBoard, which has been tracking these statistics for more than 20 years.

OnBoard’s study showed that 11.2 percent of all the board seats on Georgia’s public companies are currently held by women, a drop from 11.5 percent in 2013. 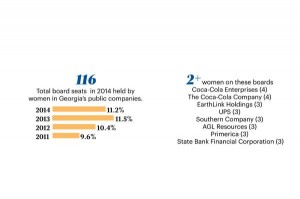 And perhaps the most disturbing trend for Rona Wells, executive director for OnBoard, was the dramatic decline in the “fill rate” – the percentage of vacant board seats that were being filled by women directors. That went from 21 percent in 2013 to 12 percent in this year’s study.

“The fill rate is key,” Wells said. “We need to put women in the seats when there are vacancies.”

“We have tried to highlight companies that have three or four women on their boards,” Wells said. “Studies have shown that that’s when you don’t see fellow directors as women directors. You see beyond gender and diversity. You see the person.”

Jackie Parker, the current president of OnBoard and a former executive with Newell Rubbermaid Inc., was particularly disappointed with the 2014 study results.

“The headline is that the numbers went down,” Parker said. “We lost traction; and we lost momentum.”

Parker also was concerned that the numbers would continue to get worse because the percentage of seats being filled by women had been sliced almost in half.

“Where there is a vacant seat on a board, it’s drifting back to men,” Parker said. “The one question I have is: ‘Why?’ I keep knocking my head up against the wall. ‘Why?’ It’s perplexing. All the studies show that productivity goes up; earnings increase when there is broad representation on a board. There’s evidence to show this is a sound business strategy.”

But the message may not be getting through to those making the decisions of whom to invite to join a board or maybe companies have not made diversity a priority.

“Some CEOs get it, but here’s a big chunk of CEOs who don’t get it, or who don’t do anything about it,” Parker said. “The question I have is: ‘Are we making the right case? What’s the trigger to get them to shift?'”

OnBoard has been trying a variety of programs to encourage getting more qualified women placed on the boards of Georgia’s public companies. It has held a “Get on Board” reception where executives were asked to bring a “board-ready woman” to come meet executives from other companies.

“We can’t lose the hope,” Parker said. “It’s discouraging, but we have to continue moving forward. We have to continue to fight. It’s a long, historical battle, and nothing is accomplished by giving up. We are just refocusing, re-engaging and making a stronger business case for women on boards.”

One area that did show slight improvement from 2013 to 2014 was in the C-suite of Georgia’s public companies. Women executive officers – those listed in the company proxy – went from 9.8 percent to 10.4 percent.

There were two Georgia companies in the top 50 that had zero women on their boards and no women in their C-suites. Those were Rollins Inc. and FleetCor Technologies Inc.

Looking ahead, Wells said, Georgia may have a few new Fortune 500 companies with relatively good stories to tell.

AGL Resources is likely to make it into the next Fortune 500 list based on its 2014 revenues for the first three quarters. As already mentioned, AGL has three women directors. It also has one woman executive officer.

Homebuilder PulteGroup Inc., which has moved its corporate headquarters to Atlanta, also has two women on its board. But it has no women in its C-suite.

Perhaps the most exciting new addition in Atlanta is one of the least known — Veritiv Corp., a spin-off from International Paper that merged with a similar business owned by Unisource Worldwide Inc. The new company, Veritiv, began operating this summer and established its headquarters in Atlanta. Mary Laschinger is chairman and CEO of Veritiv Corp.

Laschinger emerging on the Atlanta scene could help take out some of the sting that many women felt when Carol Tomé, the chief financial officer at The Home Depot Inc., was not selected to be the next CEO of the home improvement company.

Tomé was one of three internal candidates considered for the job. Marvin Ellison, an African American, another candidate who did not get to succeed CEO Frank Blake, has since left the company to become CEO of J.C. Penney. The job ended up going to Craig Menear, a veteran in the retail and merchandising side of the business.

Both Parker and Wells said the big challenge will be getting more women to be promoted to positions where they can become CEOs and directors of the major companies in Georgia and the United States. That way, when one woman does not get the top job, it won’t be as much of a disappointment because other women will be in the mix.

But Parker acknowledged that there is still a long way to go before Georgia reaches her ideal of how corporate American should work.

“My hope and dream is that CEOs, boards and chairmen would sit together in a room and talk about inclusion; that they would ask: ‘Who is missing around this table?'” Parker said. “Let’s shift away from the discussion of diversity, and let’s talk about inclusion.”

54%– of Georgia’s 136 public companies have one or more women on their boards of directors.

83%– of Georgia-based Fortune 500 companies have more than one woman director.

More in the Numbers:

Work Still to be Done

ABOUT THE OnBoard STUDY: Information is derived from Form 10-K or proxy filings with the Securities & Exchange Commission for the most recent filing as of the data cutoff date of 8/22/14.