What a year of improvement.

The number of women on the boards of Georgia’s 119 public companies increased dramatically over the past year, according to the 2021 OnBoard study of women on corporate boards and those serving in executive roles.

Take UPS. It is the first public company in Georgia to have six women directors, which includes its CEO – Carol Tomé. 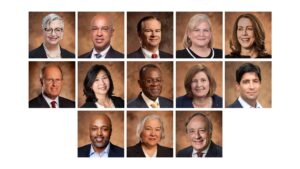 Pictures of all of the directors on the board of UPS, probably the most diverse board in Georgia. (Special: UPS.)

“The story of diversity, equity and inclusion at UPS is best understood through the lens of our people,” said Deisha Barnett, a UPS spokeswoman. “Our board of directors models our commitment to inclusion with 31 percent ethnically diverse members and 46 percent women. And, we are proud that our company is led by one of the few women CEOs in the Fortune 500 ranks, Carol B. Tomé.”

The sixth woman to join the UPS board was Eva Boratto, chief financial officer and executive vice president of CVS Health. She was appointed to the board in September 2020.

“Through every measure we look at, this year set records for women on boards, for women of color on boards as well as women executive officers,” said Lisa Robinson, president of Atlanta-based OnBoard. “We have never seen as dramatic an increase as we saw this past year.”

OnBoard started tracking women on boards and in C-suites back in 1993. For many years, the numbers were relatively flat or only showed incremental progress. The pace of have more women directors and officers has really accelerated in the past few years. 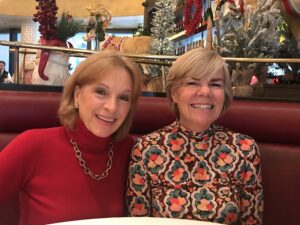 “The power of three doubled in the past three years,” said Kelly Gay, who chairs OnBoard. “This is huge for Georgia’s public companies.”

And that is smart for business. “Companies with diverse boards performed better than their peers during COVID, according to a national study by McKinsey,” Gay added. “It is a moment of recognition by corporate leaders of the value women bring to their organizations, and the results they are able to achieve.”

It’s important to note that women make up at least half of the population. No public company in Georgia has a corporate board with 50 percent of its directors as women. The closest is UPS with 46 percent.

The 2021 study will be publicly released on Thursday, Nov. 18 at OnBoard’s annual dinner at the Gathering Spot. Duriya Farooqui, a director on Intercontinental Exchange, will receive the prestigious Lettie Pate Whitehead Evans award for an outstanding woman corporate board member. Also, Susan Booth, artistic director of the Alliance Theatre, will be the keynote speaker.

Other highlights of the 2021 study include:

When asked why there was so much of an increase this past year, Robinson mentioned both the COVID-19 pandemic and the focus on diversity, equity and inclusion, especially after the murder of George Floyd by a police officer.

“As a result of the last year and a half, there has been a positive outcome,” Robinson said. “In this past year-and-a-half of turmoil, leaders have had to look inward and reflect on their own boards and corporate suites. They have been pleasantly surprised by the talent that is readily available.”

Georgia’s 18 Fortune 500 companies are leading the way when it comes to diversity, according to Rona Wells, who chairs the annual OnBoard study. The 2021 study did not include Norfolk Southern – Atlanta’s newest Fortune 500 company, because its headquarters were still listed as being in Norfolk, Va., according to SEC (Security and Exchange Commission) filings at the cutoff time for the study. 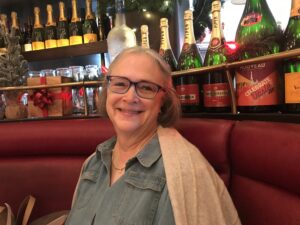 Rona Wells, chair of the annual OnBoard study. (Photo by Maria Saporta.)

“Norfolk Southern will be in next year’s study,” Wells said.

The study also shows there are 19 public companies in Georgia without a woman on their boards. (See chart below).

Robinson said Georgia’s public companies are performing well when it comes to women on boards and in the executive ranks.

“We all are celebrating,” Robinson said. “All of our partners and our power of three companies are blazing the trail and making Georgia look good.”