By Maria Saporta
Published in the Atlanta Business Chronicle on December 5, 2014

As an ultimate endorsement of its recent changes in governance and leadership, the Woodruff Arts Center is receiving the largest gift in its 46-year history–$38 million – from its top benefactor, the Robert W. Woodruff Foundation.

The grant will kick-start a fundraising campaign of at least $82 million aimed at boosting the Art Center’s endowment by more than $50 million as well as investing $32 million in capital improvements – largely to completely transform the Alliance Theatre.

“It is a phenomenal gift,” said Doug Hertz, chairman of the Arts Center board of trustees. “More than anything, it is a vote of confidence in the management and a vote of appreciation of the divisions, their artistic leadership and the art they have produced.”

The Arts Center is the largest cultural consortium in the Southeast. It includes four divisions – the Atlanta Symphony Orchestra, Alliance Theatre, High Museum of Art and Arts for Learning.

Hertz said the real benefit of the gift is the example it sets by encouraging other donors. “It is a hell of a start because we frankly have so many needs,” Hertz said. “It addresses to a large degree our highest priorities at this time, and it challenges the rest of the community to step up and support this cultural jewel of the Southeast.”

Specifically, $25 million of the grant will go towards matching gifts for endowments of positions in the three major divisions – roughly $8 million for each – a gift especially significant for the Symphony. 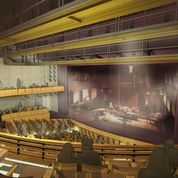 A conceptual rendering of the new Alliance Theatre (Special: TVSDesign)

To endow each ASO musician, it requires a contribution of between $2 million and $2.5 million. The Woodruff grant would be available for donors to match – translating into an endowment for about eight ASO musicians. “It means we already have the matching dollars for the first eight of the 11 positions,” said Janine Musholt, the Arts Center’s vice president of advancement. “We are already having conversations with potential donors.”

Russ Hardin, president of the Woodruff Foundation, said reaching a labor agreement with musicians was critical before the gift could be approved by his trustees. “We could not invest in an ASO that continued to operate at a deficit,” Hardin said. “The new ASO labor agreement creates the basis for a symphony that is economically sustainable. We are investing in a plan that will depend also upon the generosity of others who wish for Atlanta to maintain a world-class orchestra.”

Virginia Hepner, president and CEO of the Arts Center for the past two-and-a-half years, said conversations with the Woodruff Foundation started as soon as she joined the organization. She said the goal for each division was to be able “to achieve artistic greatness in a fiscally-sustainable manner. That was a really high priority.” Calling the negotiations with the musicians fair and successful despite the perceived rancor, Hepner said there now is the opportunity to move forward.

“The bigger the orchestra the better it sounds. There’s no question about it,” Hepner said. “I have been more worried about the long term future. Now a lot of donors are interested in helping us, and there’s a shared responsibility to grow our endowment.”

In the past four years, the Arts Center has been exercising greater governance control over the four divisions. The goal has been to create greater efficiencies and to get the various entities working more closely together. The grant proposal evolved out of a “cross-campus” analysis of existing needs. “The most important big need was for the Alliance to redo their space,” Hepner said. “It is the first time there has ever been a renovation of the Alliance Theatre. It will be a transformation. It will feel brand new.”

“Over the last few years, the Alliance has established itself in the top echelon of regional theaters, has made the annual Kendeda competition the national standard for emerging playwrights, and its board and staff have worked hard to balance its budget,” Hardin said. “The Alliance has earned our community’s support.”

Susan Booth, artistic director of the Alliance Theatre since 2001, said that her board also has raised another $4.1 million towards the renovation of the theatre that is now 46 years old.

The goal of the new space will be to create artistic excellence, inspire innovation and create community, she said. The auditorium will be reconfigured so that the audience will feel more intimate with the stage, performers and audience.

It is difficult to overstate the role that governance changes at Arts Center played in getting the history-making Woodruff grant. “Our commitment is a vote of confidence in the volunteer and professional leadership and an investment in that new governance structure and leadership,” Hardin said. “The Arts Center benefits from very strong volunteer leadership, and Virginia Hepner has provided quiet, strong and very effective leadership during her tenure. She is passionate about the arts, passionate about Atlanta, fiscally responsible and well respected in our community.”

Previous Article
From fear, to preparation
Next Article
Fort McPherson-Tyler Perry deal back in business with help from his friends