Donna Hyland, Children's president and CEO, with Lorenzo Zambino, at the 2018 ribbon cutting for the Center for Advanced Pediatrics (Special: Children's Healthcare of Atlanta)

The Robert W. Woodruff Foundation is making a $90 million grant to solidify Atlanta’s role as a center for pediatric research.

The grant will go to the Children’s Healthcare of Atlanta (Children’s) and Emory School of Medicine’s Department of Pediatrics to lure leading pediatric researchers to the Atlanta region.

Children’s and Emory, as well as Georgia Tech and other institutions, have been collaborating on pediatric research for 20 years, and together the Pediatric Institute is one of the nation’s top three centers for pediatric research in terms of funding from the National Institutes of Health (NIH).

“We are perfectly positioned to be able to do cutting edge research,” said Donna Hyland, Children’s president and CEO, in an interview. “The $90 million will go towards the Pediatric Institute research plan, and it will help us fund 30 new recruits over the several years.” 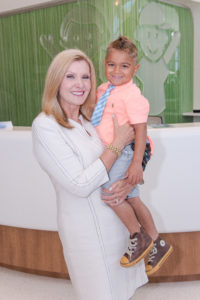 Donna Hyland, Children’s president and CEO, with Lorenzo Zambino, at the 2018 ribbon cutting for the Center for Advanced Pediatrics (Special: Children’s Healthcare of Atlanta)

“It is a game-changer that will take us from an already solid position nationally in pediatric research and take us to new heights,” said Lucky Jain, chair of Emory University’s Department of Pediatrics and Children’s chief academic officer. “It will further enrich the relationship between Emory and Children’s.”

“One of the priorities of the merger was to work on the relationship with Emory,” said Hyland, adding that at the time Children’s and Emory ranked 52nd nationally among pediatric departments in terms of NIH research funding.

“We are very comfortable our ranking will rise from No. 3,” Jain said. “Our hope is that we will be No. 1. Our biggest challenge in research is that it is not okay to be static.”

That’s because other pediatric departments also are increasing their investments in research.

“If we are going to continue to meet the needs of the children we serve, we need to invest in cutting-edge research, and we need to recruit people,” Jain said. “The Woodruff grant will allow us to recruit some of the brightest minds in the United States and perhaps the world to enhance areas of research and innovation.” 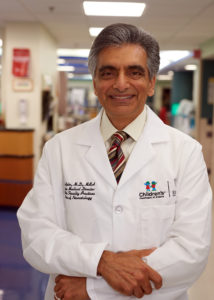 Jain said the Pediatric Institute will continue to invest in autism, sickle cell and cystic fibrosis, but it will also look to fill some gaps in the research areas of gene therapy, stem cell, inflammatory bowel disease and food allergies.

“We want to pick out areas where we can have the greatest impact,” Jain said.

Hyland credited the Woodruff Foundation, the largest philanthropic foundation in the Southeast, and its president Russ Hardin for helping the Pediatric Institute become a leading center for research.

“Russ told us: ‘You have proven you can go from 50 to the top three. We want you to stay there – on top of all the departments of pediatrics,’” Hyland said.

One of the reasons Children’s and Emory have been so successful is because of the collaborative relationship it has with other research and public health institutions in Atlanta.

“We are so beautifully positioned in Atlanta,” Hyland said. “We have been recruiting these incredible people over the last 20 years. And we took an approach to partner with Georgia Tech and Emory. We created a collaborative model. That’s one of the reasons we’ve been so successful. We have a vibrant community.”

Jain agreed. Previously he was in Chicago where there six institutions competing with each other or working independently. “They were always cutting each other’s throats,” he said.

But when he came to Atlanta, he was pleasantly surprised.

“There’s no other place in the country that has this constellation of attributes, like the CDC next door,” Jain said. “The reason why Russ and the Woodruff Foundation have given us this award is because they see how passionate we are about pediatric care and in making Atlanta and Children’s a destination site for pediatrics.”

MARTA HOLIDAY BUS A FAVORITE AT THE CHILDREN’S CHRISTMAS PARADE
Centennial Grant Update: The Institute on Healthcare and Human Trafficking
Working Together for the Greater Good
100 Years of Service Celebrated with $1 Million to Atlanta Nonprofits