A recent $4 million grant from the Robert W. Woodruff Foundation to Berry College for a new animal science building accentuates the unique relationship between Coca-Cola interests and the college located just north of Rome, Ga.

Take Robert W. Woodruff, Coca-Cola’s top executive during an explosive period of growth for the company. Woodruff served as a Berry trustee from 1924 to 1967. (The only other college board where he served as a trustee was the Tuskegee Institute – now Tuskegee University – in Alabama).

The Woodruff gift will go towards a new $16 million animal science building that will help Berry College invest in one of its most distinctive academic programs. Animal science is the largest major at Berry College accounting for more than 12% of its students.

Construction on the 22,000-square-foot building will start in the spring, and that capital project will complete Berry’s decade long “LifeReady” campaign, that began with an original goal of $100 million. 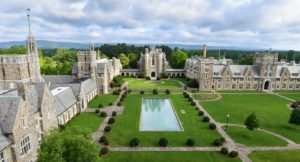 “We will finish out at about $135 million,” said Stephen Briggs, president of Berry College. “With the $4 million from Woodruff, we only have a couple of million dollars left to raise to close out the campaign.”

Berry College is a unique institution in lots of ways. It has the world’s largest contiguous college campus with more than 27,000 acres of mostly woodlands and natural areas as well as a working farm.

It was founded in 1902 by Martha Berry as a high school to teach poor children living in the rural south, including the mountains of north Georgia. Students had to work on campus to help cover the cost of tuition, a practice that continues to this day.

“We have had an animal science program since 1902,” Briggs said. “It was a residential campus where students would grow their own food. We’ve been doing animal husbandry from the very first day. It’s unusual for an institution like ours.”

Berry is a small liberal arts college, yet its animal science program is one of its most distinctive offerings creating a pipeline for students interested in going into veterinary medicine. 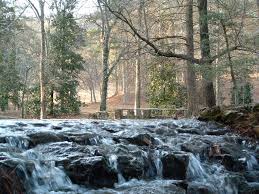 Of the 30 veterinary schools in the country, Berry animal science graduates have earned or are pursuing Doctor of Veterinary Medicine degrees at 23 institutions. Over the last 15 years, enrollment in Berry’s animal science program has grown by 187% – from 79 to 227 majors.

“It’s a rigorous science program,” Briggs said. “It’s a pre-med core plus all the animal science. You get really well-grounded education. And you get a lot of hands on experience from your first course.”

The campus has black Angus cattle, Jersey dairy cows, sheep, goats, chickens, horses and deer. According to Briggs, it provides a living laboratory for students and teachers working on the health of humans, the health of animals and the health of our ecosystem by studying the connections between the species.

Having students work on campus as they studied appealed to Robert Woodruff. Today, there are more than 1,000 positions available to students across 180 college departments, and 98 percent of students choose to work on campus at some point during their Berry education.

“Mr. Woodruff had large pieces of property,” Briggs said. “He enjoyed hunting, and he appreciated the size and scope of Berry. He very much believed in the model of Berry College.”

The ties between Berry and Coca-Cola are multiple and interconnected.

Lettie Pate Evans, an early Coca-Cola bottler, was one of the first women to serve on a major corporate board in the United States, joining Coca-Cola’s board in 1934. 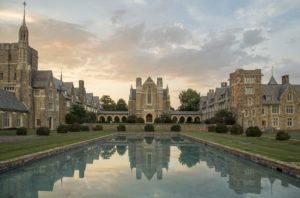 When she died in 1953, she made Berry College the single largest beneficiary of a trust established with the bulk of her estate.

Today, Briggs said, that trust is worth more than a half billion dollars, helping give Berry College a total endowment of nearly $1 billion.

“We are a very different place today because of her gift,” Briggs said. “The trust helps fund scholarships to keep our tuition costs down.”

“Berry was established to educate, in Martha Berry’s words, the ‘heart, head and hands,’” Hardin said. “It was that mission that attracted the support of Mr. Woodruff and Mrs. Evans. Berry remains true to that mission.”

Editor’s note: Maria Saporta is a member of Berry College’s board of visitors, a role she has had for nearly a decade.