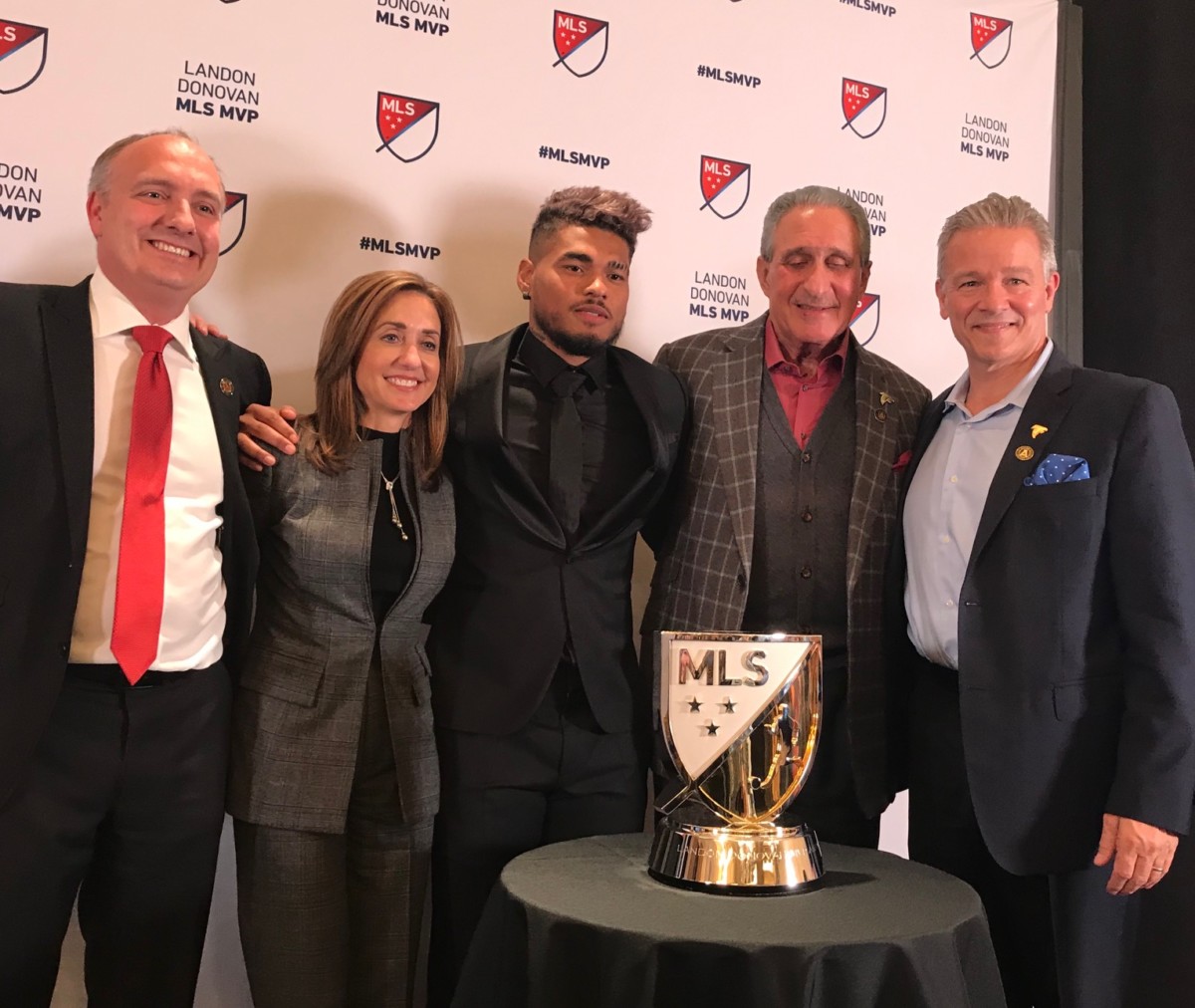 By Maria Saporta and Eric Jackson
As published in the Atlanta Business Chronicle on July 19, 2019

The recent win of the United States National Women’s Soccer Team in the World Cup is reviving interest in Atlanta getting its own professional women’s soccer team.

And all eyes are on Arthur Blank, Home Depot Inc. (NYSE: HD) co-founder and owner of the Atlanta Falcons and Atlanta United, as being the most logical owner of a new women’s soccer team in the city. 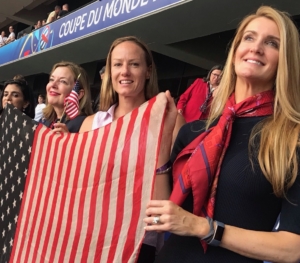 Even Amanda Duffy, the president of the National Women’s Soccer League, has said in media reports that as the organization looks to expand, Atlanta makes the most sense.

“From our perspective, we haven’t considered a women’s team – yet,” said Darren Eales, president of Atlanta United. “As we look to the future, given the continued growth of the women’s game and women’s soccer, it clearly is going to be on our radar. It probably will be sooner rather than later.”

Eales said Blank and the entire AMB organization do not make decisions lightly.

“Anything we are going to do with Arthur will be done with the proper planning,” Eales said. “I think the important thing is you set things up for success.”

Eales joined the Atlanta United organization, five years ago – three years before the Major League Soccer (MLS) team had played its first game. And Blank had been considering the possibility of bringing professional men’s soccer to Atlanta at least five years before Eales had come on board. In looking at U.S. Women’s Soccer, Eales has been impressed with the team’s success.

“It was a great tournament,” Eales said. “It shows how the women’s game has grown. If you look at the TV numbers, it was great from that perspective. It was a great performance. There are more and more investments from sponsors and soccer teams.”

And the women’s game is gaining respect. Eales, who grew up in England, remembered when soccer was considered a man’s sport. Growing up, his sister was not encouraged to play soccer. But times are changing, and there are growing investments in women’s soccer in England and around the world.

In the United States, there certainly has been an uptick in excitement with the U.S. Women winning the World Cup. But Eales said that’s one of the challenges. 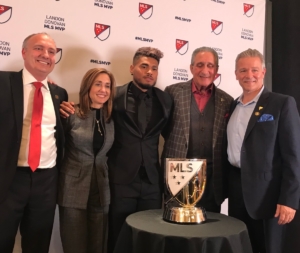 “The cycle of the World Cup is that there’s a lot of excitement, and it goes away until the next World Cup,” said Eales, who is aware of the interest to have a new professional women’s soccer team in Atlanta. “I think everybody has been talking about it with the Women’s World Cup. I think it is something we will talk about in the coming season.”

The Chicago-based NWSL, now in its seventh season, is the highest level of women’s soccer in the United States. Its nine teams feature stars like Alex Morgan (Orlando Pride), Megan Rapinoe (Seattle Reign FC) and other members of the U.S. Women’s National Soccer Team.

The professional women’s soccer league is owned by the teams and has a management contract with the United States Soccer Federation.

Of the nine professional women’s soccer teams across the United States, four of them are owned by the MLS team in their cities: Portland Thorns, Utah Royals, Houston Dash, and Orlando Pride. Also, Seattle Sounders owner Adrian Hanauer and his mother, Lenore Hanauer, have a minority investment in the Seattle Reign FC.

If Blank and Atlanta United did decide to move forward with a NWSL expansion team, they would not need approval from MLS, according to spokesman Dan Courtemanche. Instead all negotiations would have to be done with NWSL.

In an April article with Pro Soccer USA, NWSL President Duffy talked about the league’s plans to prepare for an expansion in 2020. Duffy spoke first and foremost about Atlanta being a logical expansion city for the league.

“It’s certainly a market that has proven to support the sport. And through that, we recognize an opportunity that could be a good opportunity for NWSL expansion in that market, but a lot of things factor into expansion conversations,” Duffy told Pro Soccer USA. “We certainly don’t have a question of ownership capabilities or facilities and resources there, but there is a timing and there are priorities that every organization have and so, this is a commitment too, for any expansion team that’s looking at NWSL. So, the timing has to be right for anyone that is considering it.”

When asked about the NWSL’s interest in a possible Atlanta expansion, Eales said: “That does not surprise me. We have become the soccer capital of America.”

But Eales agreed that it all will come down to timing.

Before Atlanta United, the city had a checkered history with men’s professional soccer. But Blank invested on the front end to build a fan base and create a new soccer culture in the city. It has been the most successful launch of any professional soccer team in the United States thus far.

Women’s soccer in Atlanta also has had a checkered past.

Atlanta hasn’t had a pro women’s soccer team since 2012 when the Women’s Professional Soccer (WPS) folded, and so along went the Atlanta Beat, which lasted only two seasons after the club returned in 2010 with new leadership. The original Atlanta Beat team played in the now defunct Women’s United Soccer Association from 2001-2003.

Atlanta also has had a history with amateur women’s soccer. The Atlanta Silverbacks Women played its first 10 years in the USL W-League. It later played one season in the Women’s Premier Soccer League in 2016 after the USL folded in 2015.

If a professional women’s soccer team does return to Atlanta, at least one viable home venue is at Kennesaw State University’s Fifth Third Bank Stadium, which is where the Atlanta Beat formerly played. The 10,500-seat soccer stadium, home of Atlanta United’s USL Championship affiliate, could provide an expansion team with the space to be competitive and attractive to fans.

Zach Kerns, executive director and general manager for KSU Sports and Entertainment Park, said he has not heard anything regarding expansion but welcomes the possibility of housing another pro women’s soccer team.

“We’re always open to a conversation,” he said. “We definitely have tenants right now and partners, which is our own athletic department, (KSU) Sports and Rec and Atlanta United, too, so we have some folks (already) in. So, obviously scheduling becomes the next piece of that puzzle. We would definitely welcome the conversation, but there would be a few next steps to actually make anything happen.”

Across the country NWSL teams have noticed the love affair Atlanta United has created with the city, drawing on average of over 50,000 fans per home match. As the league looks to expand and capitalize on this rising momentum, Atlanta could be the best market, with a passionate fanbase already in place.

“I think it would be tremendous,” said Gretchen Hamm, chief marketing officer of the Washington Spirit. “Obviously having another East Coast team makes travel a little easier for teams like us, and Atlanta is wildly supportive of soccer. There’s a lot of smart soccer people down there, so I think it would be a home run.”

Eales definitely did not close the door to the possibility of an Atlanta NWSL team.

“If at the right time an opportunity comes on the radar, we will consider,” said Eales, who said “the growth of the women’s game is great for the sport” overall. “The important thing is to set things up for success.”