In a series of exclusive texts with SaportaReport on Thursday, Smith, CEO of South Carolina-based WRS Inc., expressed disappointment he was not successful in realizing his plans to revitalize Underground. 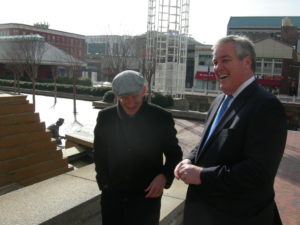 “We were having some problems with lenders refinancing in this environment and Shaneel already had financing set up and was looking for a large project,” Smith said in response to why he had decided to sell Underground

Because WRS had had so many false starts, there was widespread skepticism about whether he would be able to pull off the complicated revitalization of Underground, directly east of the Five Point MARTA Station, the hub of the transit system.

“We did not want any more delay with Underground Atlanta,” Smith continued. “After meeting and talking to Shaneel, it is obvious that he has the same desire to see a redeveloped and flourishing Underground Atlanta as we do. So, we agreed to sell it to him. WRS will be helping him with the transition for a while.”

It was quite a different story on Dec. 17, 2014 when then-Atlanta Mayor Kasim Reed announced the City of Atlanta had entered into an agreement to sell Underground’s 12 acres to Smith.

“I can’t tell you how excited we are to develop this piece of property,” Smith said at the time. “We are going to be able to do something great for our company and also to do something fantastic and great for Atlanta.”

Smith, however, was surprised when so many Atlantans questioned why he would want to invest in Underground, which has had an on-again, off-again history. But Smith believed it was one of the prime locations in Atlanta, and he had hoped he would be able to capitalize on the real estate trend of people wanting to move to central cities.

“Yes, I am somewhat disappointed that I will not be heading it up to its conclusion,” Smith wrote in a text on Thanksgiving. “But I want to see it done for Atlanta, and at this point this is the best way for that to happen.”

Previous Article
WRS sells Underground to local owner giving it ‘a ray of hope’
Next Article
Peachtree Street as a ‘shared space’? Comments accepted through Nov. 29