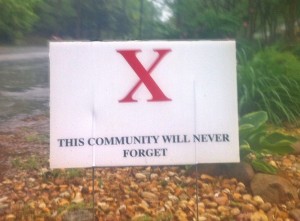 In spray paint graffiti on utility poles, on mass-produced placards in homeowners’ yards, in duct tape on a street sign near the spot where X’avier Arnold, 21, died the day after Christmas—these signs remain all over these east Atlanta neighborhoods. Here, the X reminds the public that memorials don’t have to be made of stone or steel to endure. Sometimes the strength of collective resolve is enough: X stands for a community’s declaration of its desire to end the kind of violence that claimed his life.

“I think it is beautiful,” said Nichole Villafane, Arnold’s mother. “It shows just how great a spirit that X’avier had. It’s amazing how someone can be so honored even after death by people who did not know him.” 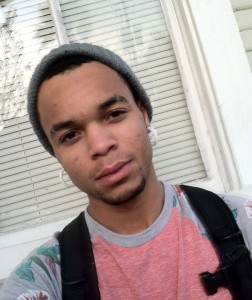 X’avier was a cartoonist, artist and student at the Savannah College of Art and Design when he died.

The first X’s appeared days after Arnold was gunned down by alleged robbers Dec. 26 as he walked with  friends. The makeshift signs were followed by professionally manufactured yard signs with the message: “X This community will never forget.”

“It was something that struck us all,” said Ashley Derrick, who lives in the area. “Here these young people were walking around minding their own business when they got held up. It was the fact that he was so needlessly and senselessly killed, that it happened in our neighborhood.

“I was so angry and felt so saddened for the young man and his parents,” Derrick added. “I wanted to show them that people do care—something to give people hope.”

Derrick, a realtor, decided to take the makeshift “X” signs a step further. She designed the “X, This community will never forget” placards and ordered several hundred of them. Within 48 hours she had given away every one.

“It was just something to get the community behind,” Derrick said. “I’m glad they’re still there. I want them to be there.”

Despite any enduring power these signs possess, they do not point yet to a redemptive ending to this tragedy. 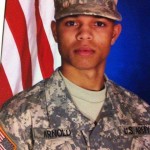 Arnold was also a member of the U.S. Army Reserve prior to his death.

Arnold, who lived in Lithonia, was an artist and cartoonist developing his craft at the Savannah College of Art and Design. He was also a U.S. Army reservist. With his girlfriend and a friend, he was walking along the multi-use trail near the Pullman Yards taking photographs of graffiti when, according to investigators, a pair of assailants tried to rob them.

Arnold resisted and was fatally shot in the head, two weeks shy of turning 22. His friend and eyewitness to the shooting, Ibrahim Sanusi, 22, suffered a gunshot wound to the leg. (In a weird twist, Sanusi drowned last month at Lake Lanier).

Alleged shooter Zion Wainwright, 14, and his alleged accomplice, Qutravius Palmer, 22, lived in the Kirkwood area. Last month they pleaded not guilty to the murder. Wainwright is being tried as an adult.

While the signs show the neighbors’ unity, Arnold’s mother has tried to find some unifying meaning in her son’s death. Her quest has led her, she said, to recognize that this tragedy has likely ruined the lives of two other mothers’ sons.

Villafane learned that Wainwright was a standout football player in Little League and at his school, and that Palmer has a daughter.

“I do feel sad for these two young individuals,” Villafane said. “One is leaving a daughter and has another one on the way. The other is leaving behind a future. They didn’t just take away from us. They took away from their own families.” 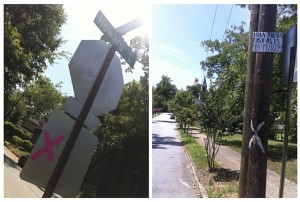 Soon after the shooting, makeshift “X” symbols started appearing all across Kirkwood and the surrounding area. Seven months later they are still there.

I was surprised at what she said next.

“I forgive them,” Villafane said.

How is that possible? How can a parent forgive anyone linked to destroying a child, especially one with so much promise?

“Harboring grudges only keeps you in prison,” she replied.

I hope the X signs stay up as a reminder of her forbearance as well as the neighborhoods’ stance against crime. She would like that too. The signs remind her of his sacrifice.

“It definitely shows me that he had a purpose on this earth,” Villafane said. “I am saddened that it took my son’s death to fulfill that purpose, but his death was not in vain.”

Previous Article
The recovery, and the president, struggle against a skeptical tide
Next Article
Atlanta Residential Real Estate Index Hits Record High With Across the Board Housing Improvements