Mtetwa is the first woman and the first non-Georgian to receive the Ivan Allen Jr. Prize – named in honor of the city’s enlightened mayor during the 1960s – which comes with a $100,000 cash award.

She will receive the prize and be honored during a ceremony at the Ivan Allen College of Liberal Arts scheduled for Nov. 13. 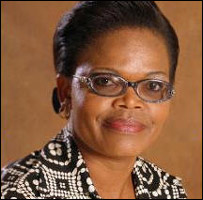 Mtetwa has fought against injustice and defended press freedom for more than 20 years. She has endured harassment and arrest as she has advocated for human rights, social justice and women’s equality and advancement.

“Ms. Mtetwa has endured a sometimes painful journey to achieve the larger purpose of freedom and justice for all,” Peterson said. “That is the promise of a democracy, and Beatrice Mtetwa embodies the effort to fulfill that promise. There are some who, through great personal sacrifice and courage, impact the lives of countless individuals as well as those for generations to come. Ms. Mtetwa is one such person.”

Peterson made the announcement at a preview event of the exhibit: “KONGO across the WATERS” at the Carter Center. The event was hosted by Jacqueline Royster, dean of the Ivan Allen College, and Geneviéve Verbeek, the consul general of Belgium in Atlanta. President Jimmy Carter and several other honored guests also were in attendance as part of the ongoing collaborative Africa Atlanta initiative.

The Ivan Allen Jr. Prize for Social Courage was established to recognize individuals who, by standing up for clear moral principles in the social arena, have positively affected public discourse at the risk of their own careers, livelihoods and even their lives.

It was made possible because of a gift from the Wilbur and Hilda Glenn Family Foundation, which endowed the prize in perpetuity.

The selection of Mtetwa comes at a time when government leaders in Zimbabwe are again persecuting human rights defenders.

“I am hoping that the message that will be sent out there is that one can be true to their beliefs regardless of whatever dangers might be lurking in the background,” Mtetwa wrote in an email. “If more of us were prepared to do this kind of work, it would be more difficult to target them for persecution, and it is my hope that this award will help swell the numbers of people prepared to stand up for what is right.”

Mtetwa has been physically assaulted and has had her life threatened. Still, she continues to champion civil activists and local and international journalists.

She also works to protect the rights of women and children; to preserve the essential rights of peaceful assembly, association and speech; and to help farmers wrongfully evicted from their land by the government.

The nominations for recipients of Ivan Allen Jr. Prize come from the public. A nominating committee then makes a recommendation to Georgia Tech President Peterson, who makes the official selection.

The nominating committee is chaired by Joseph Bankoff, who chairs the Sam Nunn School of International Affairs at Georgia Tech.

Prior recipients include Sam Nunn, William Foege. and John Lewis. For more information on the prize, please click on this link.