100 Black Men of Atlanta has been named the “2020 Large Chapter of the Year” by the national organization, 100 Black Men of America, for its leadership in four focus areas that continued despite the challenges of this past year. 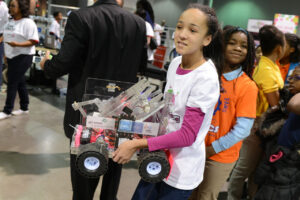 The four categories are mentoring, education, health and wellness, and economic empowerment. The chapter rose to meet the year’s challenges by continuing its commitment to serve, Kevin Gooch, the chapter’s chair wrote in the 2020 Impact Report: 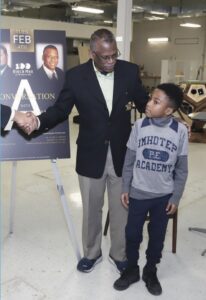 “We’re incredibly proud to receive this award, but a big part of why we won is the commitment and dedication of our members and sponsors,” Louis Negron, executive director and chief operating officer of the Atlanta chapter, said in a statement.

NASA scientist/inventor Lonnie Johnson is among those who continued to work with the chapter in 2020, through his organization that’s been working with Atlanta’s youth for more than a decade, the Johnson STEM Activity Center.

Though Johnson has a masters degree in nuclear engineering from Tuskegee University, he may be best known as the inventor of the Super Soaker water bazooka. He came up with the idea while working in his basement bathroom on a refrigeration system that used water instead of hazardous Freon, according to a story by biography.com.

A parent, Afua Saafir, provided this testimony, in the annual report, about the role of Johnson and other 100 BMOA mentors in his children’s learning: 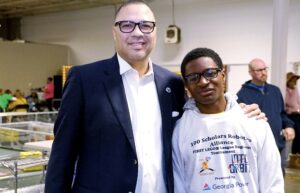 Ray Singer, programs director for 100 Black Men of Atlanta, pauses for a photo with a young man participating in an event. Credit: 100 BMOA

The chapter cited the following accomplishments in 2020, according to the statement: 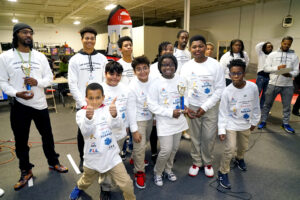 Youngsters participating in a program hosted by 100 Black Men of Atlanta pause for a photo. Credit: 100 BMOA

Previous Article
“It looks like a prison”: Housing project derided for design shortfalls
Next Article
Independence Day: Founding documents remind of words of freedom amid slavery