In June 2022, Rodney Bullard and Dan Cathy talk about the Beloved Benefit with Benjamin Earley at the Westside Future Fund's breakfast meeting. (Photo by Maria Saporta.)

The Beloved Benefit is back.

On July 7, the second Beloved Benefit will take place at Mercedes-Benz Stadium. The event is one of the most ambitious fundraisers in Atlanta, and it will feature two headliner performers — Usher and Maroon 5 — as well as other entertainment.

The fundraising goal is an ambitious $10 million.

“Our focus for this year is economic mobility and financial stability,” said Dan Cathy, chairman of Chick-fil-A who was the original visionary for the event. Cathy was part of a conversation that was held at the Transform Westside Summit on June 17. Several of the organizations that will receive significant grants from the Benefit are focused on the Westside

When Cathy first had the idea for the 2019 Beloved Benefit, he went to see Arthur Blank, owner of the Atlanta Falcons and Atlanta United. Both Cathy and Blank have made rejuvenating the Westside a philanthropic priority. The 2019 event ended up raising $5 million which went to five major nonprofit organizations as well as 10 smaller community beacons — contributions that ended up benefiting 38,000 people.

But Cathy said a big part of the event’s success was the coming together of business and civic leaders sitting side-by-side with community residents at long tables. It was reminiscent of the historic Atlanta dinner on Jan. 27, 1965, honoring Martin Luther King Jr. after he was awarded the Nobel Peace Prize. 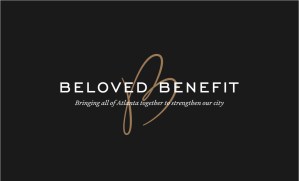 “We want leaders to engage with the participants who will benefit,” Cathy said. “We use the long tables so everyone can sit together.

The Beloved Benefit took a two-year hiatus because of the COVID-19 pandemic. Plans for a 2021 benefit had to be canceled because of a resurgence of the coronavirus.

Although there wasn’t a benefit in 2020 or 2021, organizers launched online conversations in the summer of 2020. The conversation series is an ongoing series.

Rodney Bullard, executive director of the Chick-fil-A Foundation and Chick-fil-A’s vice president of corporate social responsibility, said the dinner is geared towards bringing a diverse group of people together.

“The room is a reflection of our city,” Bullard said. “We all belong to the house of Atlanta.”

Bullard also explained that every dollar raised will actually go to the beneficiaries, which will include Atlanta Career Rise, Center for Employment Opportunities, the Goodr Foundation, Goodwill of North Georgia, Latin American Association, Quest Community Development Organization, the Village Market and the Westside Future Fund.

“Arthur is opening up his home [Mercedes-Benz Stadium], and Dan is paying for the party,” Bullard said about how all the money raised will go to the selected nonprofit organizations.

Cathy said they decided to focus on financial stability because Atlanta has one of the worse track records in the country for economic mobility. If you are born in the bottom fifth income bracket in Atlanta, you only have a 4 percent chance of reaching the top fifth income bracket.

That’s why Cathy and Beloved Benefit organizers decided to double the 2019 fundraising goal.

“Today we have commitments for $5.5 million that has already been raised,” Cathy said. “We have about $4 million to go.”

Bullard said most of the dollars are coming from corporations as well as a coalition of individuals and associations.

John Ahmann, president of the Westside Future Fund — a recipient of the Beloved Benefit’s fundraising, said the dinner is about intentionally bringing people together.

Cathy agreed. The dinner will “elevate the challenges and opportunities,” he said. “It is the breadth of Atlanta who will attend this event. It should inspire us all to reinvest in our community.”