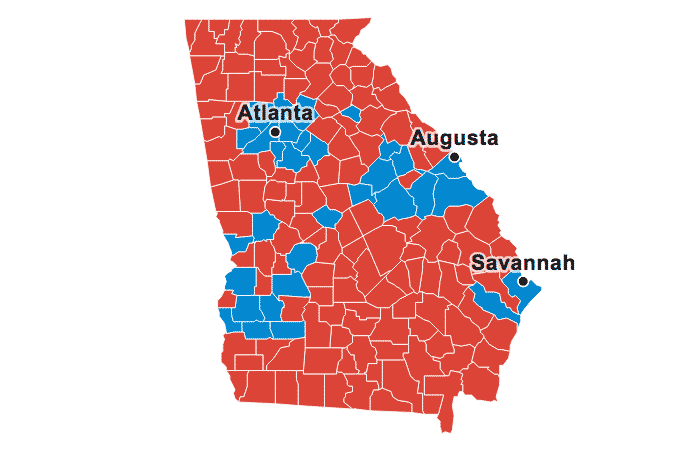 If you had told a Democrat before this election that Hillary Clinton would turn Cobb, Gwinnett and Henry counties blue while improving on Barack Obama’s performance across the entire Metro Atlanta region, they would have gone to bed confident they were going to carry the state.

Didn’t happen — the part about carrying the state, that is.

The results from the election in Georgia clearly reflect the big national story of this campaign. Here as elsewhere, Donald Trump won the election in the rural areas and small towns, the places where the hospitals are closing and it’s hard to get a decent internet connection.

What’s striking in Georgia is the sharp divergence, all across the board, between Metro Atlanta and the rest of the state. Here, Clinton did better than Obama in his second election. Practically everywhere else she did worse.

Consider Fulton and Muscogee (Columbus), reliable Democratic counties with a high percentage of African-American voters. In Fulton County, Clinton improved on Obama’s 2012 performance by a remarkable five percentage points, winning 69 percent of the votes cast in the county. She won in Muscogee as well, but with 58 percent, two points less than Obama four years ago.

Or turn it the other way and look at Paulding and Effingham (Savannah), both suburban (or exurban, if you want) counties with a lot of blue-collar Republican voters. Trump romped in both, but in Paulding, Clinton performed about a point better than Obama in his last outing, while in Effingham the Democrat dropped three points from four years ago.

I’ve confined the comparison to the numbers for Obama and Clinton because the the comparison between Mitt Romney and Trump is made a little more confusing by the uptick in votes for Libertarian Gary Johnson.

Given the different circumstances, the statewide results this year were very similar to four years ago. Trump got about 7,000 more raw votes than Romney in 2012. Clinton got about 96,000 more votes than Obama, and Johnson improved from 1 percent to 3 percent.

What really changed was the distribution of that vote. We’ve discussed Metro Atlanta and some of the state’s bigger counties, but much of this year’s story was told in Pierce County, which turned out about 7,300 voters last week. Four years ago Obama got 17 percent of the vote there. Last week Clinton got 12 percent.

While a 5-point shift in a small southeast Georgia county may not seem decisive, by the you add up all the Pierce Counties, you could close your eyes and throw a dart at the map, and there’s a very good chance you’d hit Trump country.

Local Republican officials have done a bit of finger-pointing over the falloff in the metro area, and dismissed the idea that the results have much long-term meaning, pointing to the election of most Republican candidates in their counties.

But sometimes the most obvious things can be the easiest to dismiss. Editorial writers used to talk about the idea of “two Georgias” so much it became kind of a cliche, but this election etched it out in fine detail, and suggests a divergence which could grow wider over time. This election was unique, but that doesn’t mean the fault lines it reveals won’t turn up again later.

What has changed since we first started talking about two Georgias a few decades ago is that this Georgia, Metro Atlanta Georgia, not only is more well-off than the other one, it is dramatically more diverse than it used to be. The odds that a voter in the metro area was born in another state are dramatically higher, whether that voter is Republican or Democrat. That’s only one indication among many that they’re connected to a level of the economy which has passed voters in the other Georgia by.

This election also showed the benefits of artful map drawing when you’re the majority party. In the districts where Republican incumbents faced Democratic challengers, they pretty consistently won in the 60 percent range, with the exception of a few legislative districts. Democratic incumbents facing Republican challengers tended to win in the 70 or even 80 percent range. Republicans have managed to draw a lot of Democrats into a relatively few districts, but the suburban territory they defend is becoming increasingly diverse.

Combine this with the turbulence at the top of the ticket last week, and Metro Atlanta could be a very interesting place in the next few years.