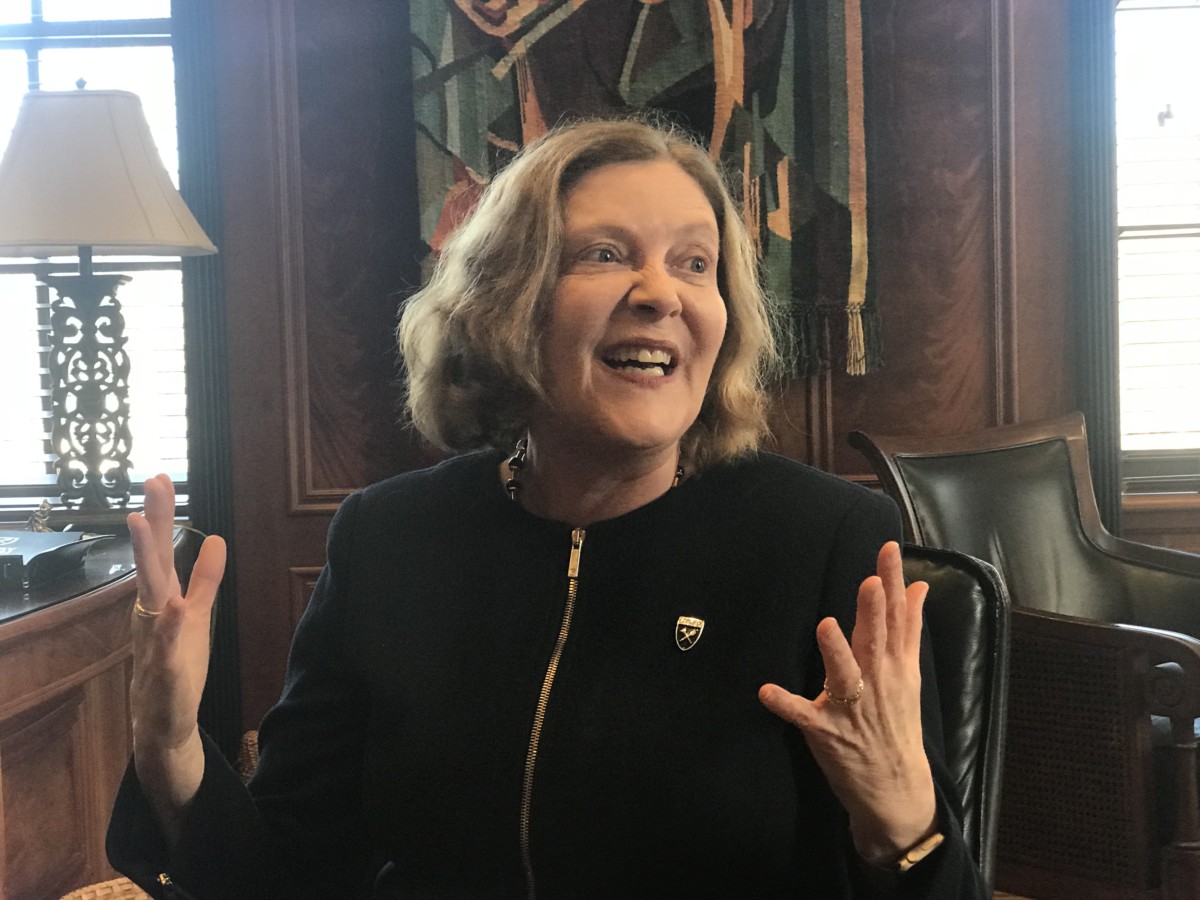 By Maria Saporta and Ellie Hensley
As published in the Atlanta Business Chronicle on Jan. 12, 2018

The Robert W. Woodruff Foundation gave Emory University a $400 million grant that will enable it to kick-start two major projects. 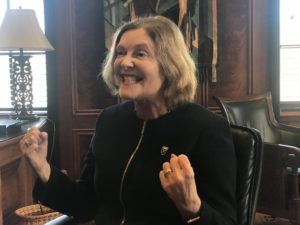 The gift from the Woodruff Foundation, announced Jan. 8, is the largest Emory has ever received. It solidifies a relationship that dates back to 1937, when Coca-Cola mogul Robert W. Woodruff donated $50,000 to the university to create the Robert Winship Memorial Clinic. Woodruff made the gift in honor of his mother, Emily Winship Woodruff, who had to travel to New York to receive cancer treatment and later passed away from the disease. Woodruff’s gift was made to give Georgians the best treatment possible without having to leave the state by bringing together cancer physicians and researchers to Emory’s Winship center.

“Robert W. Woodruff didn’t have a higher priority in his own philanthropy,” said Russ Hardin, president of the Woodruff Foundation. “This grant is the latest in a series of historic support to build an academic medical center that ensures that Georgians have access to world-class health care. We haven’t forgotten what Woodruff’s priorities are, and they’re more important than ever with the changes in health care. We continue to train the best health-care professionals here in Atlanta.”

Jimmy Williams, chairman of the Woodruff Foundation and once a personal friend of Woodruff, said Emory let them know what they needed to continue being a leading-edge medical center and research facility.

“We’ve been studying it a long time, and it seemed like this was a good time to do it,” said Williams, a retired CEO of SunTrust Banks Inc. 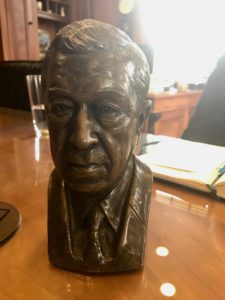 When asked how Woodruff, who died in 1985, would have felt about the gift, Williams said, “I think he would have liked it. He would have thought we had done our homework.”

Hardin said the Woodruff gift is a vote of confidence in the relatively new leadership at Emory. Claire Sterk was named the university’s president in 2016, and Dr. Jonathan Lewin was named CEO of Emory Healthcare at the end of 2015.

“In some ways it’s a dream come true,” said Sterk of the gift. “Woodruff has been so important to Emory at every point along its development. I think it’s a real honor to continue that legacy with this gift.”

The $400 million will go toward building a new Winship Cancer Institute Tower in Midtown and a new Health Sciences Research Building next to the existing facility off Clifton Road.

Emory is still conducting feasibility studies, but the new Winship tower could rise at the corner of Peachtree Street and Linden Avenue, adjacent to the Emory University Hospital Midtown campus. The site is currently a surface parking lot. 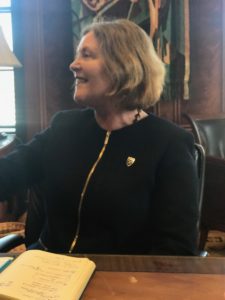 Since being named a National Cancer Institute-designated Comprehensive Cancer Center in April 2017, Winship has seen demand for its services rise considerably, said Lewin.

“People who want the best possible care and the best outcome for their cancer are seeking out Emory more and more,” Lewin said. “We have a wonderful cancer center here on Clifton Road, but it’s only so big.”

Winship’s new location will enable Emory to offer top-notch cancer care in an area with access to public transit.

“Having Winship in the Midtown area makes so much sense,” Sterk said. “It will provide access for different populations… This puts a stake into the ground for us.”

The other half of the Woodruff gift is earmarked for a second Health Sciences Research Building on Emory’s main campus. It will be located next to Emory’s existing research building, across the street from Children’s Healthcare of Atlanta.

“The first building was built with the intent that at some time in the future, we’d be able to have a second building to share some of the infrastructure elements with it,” Lewin said. “It’s going to be bigger than our current health sciences building there and that in large part reflects how our research mission has grown in the last decade.”

Last year, Emory’s external research funding reached $628 million. This new health sciences building will allow Emory to develop even more innovative cures for patients across a spectrum of diseases and disorders. Its five priorities are brain health; cancer; heart and vascular health; immunology and infectious diseases; and radiology, biomedical engineering and imaging sciences. Pediatrics will also be a focus.

The new research building will enable Emory to strengthen its relationships with key partners like Grady Memorial Hospitaland Children’s Healthcare of Atlanta. 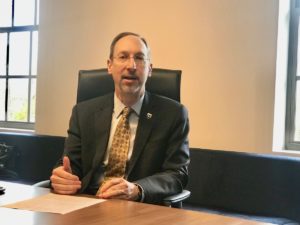 Emory University also has a large campus in Executive Park, across North Druid Hills from the site of Children’s Healthcare’s planned $1 billion replacement hospital and pediatric campus. Emory’s Brain Health Center, Orthopedics and Spine Center and the Emory Sports Medicine Complex (operated in partnership with the Atlanta Hawks) are already located on the campus, but Emory has yet to share plans for the entirety of the 70 acres it owns.

None of the Woodruff gift will go directly to Emory’s Brookhaven campus, but that doesn’t mean it won’t benefit, Lewin said.

“This money is going to have a significant impact on that campus,” Lewin said. “The innovations done in brain health in the new research building will directly inform the clinical trials that go on at the Brain Health Center.”

Emory will continue to raise funds for both the Winship tower and the Health Sciences Research Building, but Woodruff’s gift is a big start.

“The contributions from the foundation have really helped us move care in health sciences, and cancer in particular, forward for the state of Georgia,” Lewin said. 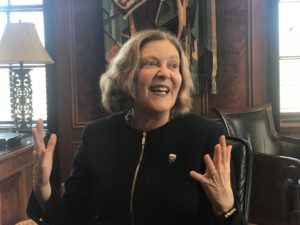 Before he died, Woodruff and his brother, George Woodruff, gave Emory a then-transformational gift of $105 million. It was the first nine-figure gift to an institution of higher learning, and it helped catapult Emory to become a leading institution dedicated to education, medical care and research.

The Woodruff family of foundations in 1996 jointly gave Emory $295 million to support the Woodruff Health Sciences Center. The gift included Coca-Cola stock from the Woodruff Foundation as well as the Joseph B. Whitehead Foundation and the Lettie Pate Evans Foundation.

The 1996 gift also was made to help the Winship Cancer Institute be designated as a center of cancer care by the National Cancer Institute (NCI). At the time, Georgia did not have an NCI-designated cancer institute, which meant many Georgians would travel outside the state for care.

The Winship Cancer Institute received that designation in 2009. Then last year, Winship earned the prestigious comprehensive cancer center designation from NCI, placing it in the top 1 percent of all cancer centers in the United States.

“Emory has made good on the investment that was made in 1996,” Hardin said in a telephone interview on Jan. 9. “I think we’ve made huge strides in cancer care and research.”

Hardin went on to say the two principal purposes of the 1996 grant were research and cancer care, and Emory has excelled in both.

And because Emory delivered so well on both of those goals, Hardin said the Woodruff Foundation felt it was time to reinvest in those efforts by making the $400 million gift.

“I feel really good personally about this one,” Hardin said. “This gift is absolutely consistent with Woodruff’s own priorities and as I said, Emory has made good on our previous investments, particularly those made in 1996.”