My mother — Nora Saporta — moved to the United States a couple of years after World War II barely knowing English. As many Europeans, she was multilingual — fluent in French, Greek, Spanish and Italian — and then having to learn German the hard way.

But French was the language of her heart and soul.

It’s probably not surprising that 50 years ago  — in the fall of 1963 —she co-founded the Ecole de l’Alliance Française d’Atlanta with her friend Jean Lardon.

The Ecole will celebrate its 50th anniversary at a Gala on Sunday, Sept. 29 at the Piedmont Estate and Gardens from 5 pm. to 9 p.m. We are hoping people who have been touched by the school over the past 50 years will come celebrate this milestone. For more information, please click here.

That evening, we also will honor Michael Shapiro, director of the High Museum of Art, for all he has done to build closer ties between Atlanta and France through the love of art.

Looking back on the history of the Alliance, I can’t help but marvel at my mother’s strength and tenacity. She was born in Salonica, Greece as part of the thriving Sephardic (Spanish Jewish) community that had migrated there after 1492.

During World War II, while hiding in Athens, my mother and father were captured on their one-year wedding anniversary along with my mother’s parents. My father escaped, but my mother and her parents were taken by train to the Bergen Belsen concentration camp where they spent an incredibly gruesome year.

Six months after the war, my parents were reunited. Papa was determined to leave war-torn Europe for opportunity in the United States. And so my mother reluctantly found herself in the United States having to adapt to a new country and a new language. 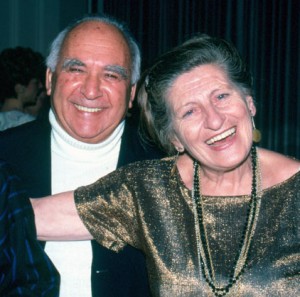 So it is rather remarkable that my mother , an immigrant woman in the early 1960s in Atlanta, was able to start a French school in what was then a relatively small town in the deep South. I remember people staring at us as though we were aliens from another planet when we would be speaking to each other in French while walking down the street.

The Alliance’s first home was in donated office space consisting of one classroom and an office at 50 Whitehall Street (later renamed Peachtree Street) above the “Three Sisters” store.

As a young girl, I loved going there because the building still had manually-operated elevators, and the woman who operated the elevator would let me “help” her operate it.

With a $75 budget, my mother and Mrs. Lardon bought 10 classroom chairs at $1 apiece, a blackboard and a few textbooks.  Air France donated a used desk and three armchairs.  The school started with 35 students divided into four classes.

Among the first teachers were Mama, Blanche Hawner, Margery Krebs, and soon after, Simone Estep.  In 1965, Louis Chatagnier, an Emory professor, became president of the Alliance, and he urged the school to adopt the then state-of-the-art audio-visual method to teach French.

The school continued to grow.  It moved from Whitehall Street to 800 Peachtree St. and later relocated across the street to 795 Peachtree St. My father’s architectural office was almost next door along Fifth Street, and I was living in a beautiful three-story apartment building (now demolished) at Fourth and Peachtree Street — so the Saportas had taken over that part of Midtown.

I remember taking a few French classes from my mother. She became a different person — an actress who would play all kinds of roles to get her students to start feeling comfortable speaking a new language.

As I watched her, I realized Mama had been born to teach. And the Alliance had become one of her children. So much of her life and so many of her friends revolved around the school — including long-time board chairman — Richard Munroe — who passed away in 1991. 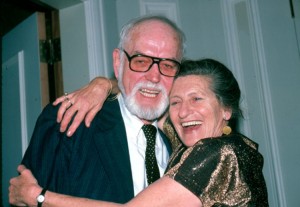 Mama served as director of the school until the mid 1990s, and unfortunately she left because of a split within the organization — a situation that caused her great sadness. She died in April 1999 still feeling estranged from the Alliance.

When I was asked to join the board a few years later, I knew it would be a way to protect her legacy and make sure her contributions to the Alliance would not be forgotten. Today I’m delighted to serve as a co-vice president of the board, and I take great pride in being part of the organization my mother helped create.

In fact, I am trying to raise a $50,000 restricted fund to create an endowed annual “Nora Saporta Teacher of the Year” award that we will give to a deserving Alliance Francaise teacher each year.

The Alliance is blessed to have had great leaders — staff and volunteers — including Claude Wegscheider, Hélène Courault-Touré, Nigel Richardson, Daniel Wolff, Terri Vismale-Morris among others — who have done so much over the years.

Today we are located at Colony Square where we share space and co-sponsor events with the Goethe-Zentrum Atlanta, the German language and cultural center.

As a proud daughter, I would like to thank Mama for all she did to nurture the Alliance for more than 30 years. Merci Maman.

Previous Article
Column: New (co)lab event seeks to inspire regional collaboration
Next Article
Martin Luther King III: ‘I’m committed to getting this resolved; and I would hope it would not be in court’