Battle over Obamacare one that draws both parties 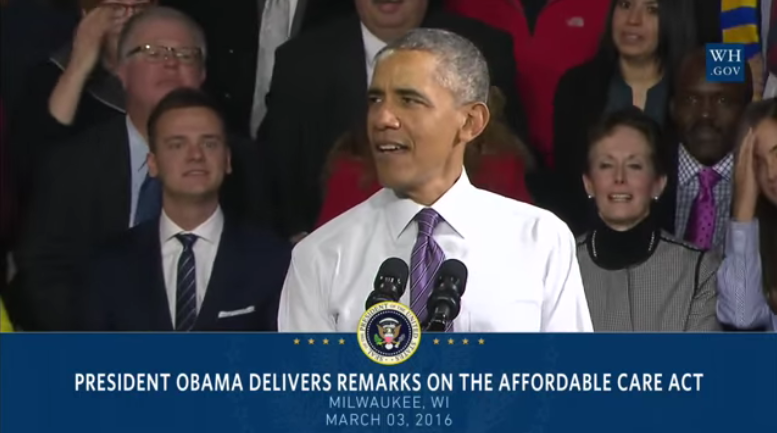 For a glimpse of what the fall general election campaign might really look like, neither of last week’s primary debates may have been as revealing as President Obama’s trip to Milwaukee.

Obama came to Milwaukee Thursday to salute it for winning a competition to see which city could sign up the most uninsured through the Affordable Care Act. It was an unabashedly political event, in which the president also goaded Republican Gov. Scott Walker for his refusal to accept the Medicaid expansion, and announce that 20 million Americans have now received medical coverage under what is also known as Obamacare.

Obama was introduced with a road-to-Damascus spin by Brent Brown, who said he never voted for the president, but received coverage and life-saving surgery for a pre-existing condition under Obamacare.

“I am a Republican who cursed his name, who falsely accused him and someone who zealously worked to insure that he would never be my president,” Brown said.

Walker and other Wisconsin Republicans had answered Obama before he got there, vowing to stand firm against the Medicaid expansion and citing studies from a conservative think tank showing higher deductibles and premiums in the state since passage of what they called the inappropriately named Affordable Care Act.

As Politico explains in a story about the presidential visit, both sides in Wisconsin think they can win on this issue. Democrat Russ Feingold, who lost his U.S. Senate seat to Republican Ron Johnson in 2010, is back for a rematch in one of this year’s most closely watched races. Johnson still attacks Feingold for voting for Obamacare as he did six years ago, but Feingold is currently leading in polls of the race.

We’re certain to see a similar kind of battle played out in the general election. All the surviving Republican candidates, including Ohio Gov. John Kasich, have pledged to repeal Obamacare. In the race for the Democratic nomination, Hillary Clinton has cast herself as the defender of the ACA from the dangers of Bernie Sanders’ dangerous tinkering. In the likely event she becomes the nominee, it will be easy to pivot into the role of defender against repeal. Nor would Sanders have any problem picking up the banner.

Healthcare in the United States hasn’t evolved as exactly the way either supporters or opponents of the ACA thought it would, which makes it harder to calculate exactly how it will play in the next election.

It was widely predicted when the ACA was passed that cuts in subsidies to the privately-administered Medicare Advantage plans would cause these programs to wither away. Instead, they’ve gone up by more than 50 percent.  At the same time, insurers who rushed into the marketplaces created by the ACA have been burned, and some have threatened to pull out of the system.

In Oregon, one of the states which has accepted the Medicaid expansion, the state’s major insurers have seem big losses, but hospitals — unlike those in Georgia, which has rejected the expansion — are seeing huge profits, as their obligatory charity cases have dropped and their corridors have filled with paying customers. But the hospitals have been slow to pass on any savings to the public.

For the Democrats, much of this election will be about turning out as many of those 20 million Americans who have benefited from Obamacare as possible. For Republicans, stirring resentment over higher deductibles and premiums will be a high priority.

Republicans know they don’t like Obamacare, but many weren’t crazy, either, about the plan Donald Trump put out last week as an alternative, on the same day Obama was taking his victory lap in Milwaukee. You wonder, too, how many more Brent Browns there are out there.