‘A Beautiful Day in the Neighborhood” – Tom Hanks, a deceptively strong Mr. Rogers 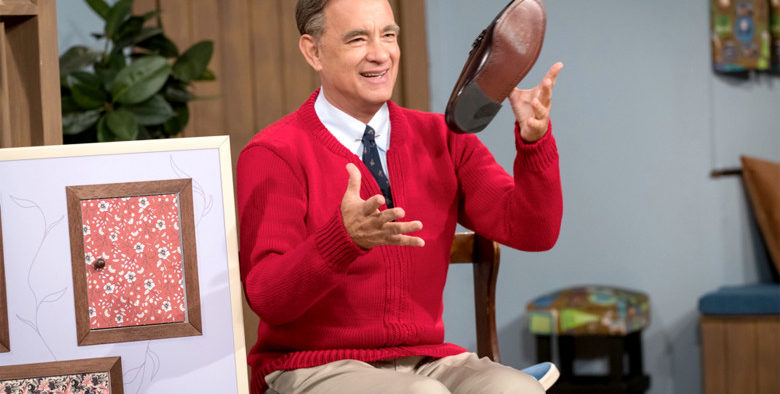 “A Beautiful Day in the Neighborhood” may be one of the most daring movies of the year.

The title suggests kid stuff; you know, a chance to embrace the affable and spiritually-inclined children’s show host many of us – or our kids or our grandkids – grew up with. Fred Rogers was, in his way, the “anti-Sesame Street.”

While Children’s Television Workshop churned out flip, funny, fast-moving segments, Rogers was calm, kind and definitely low-tech, relying on hand puppets you could’ve seen in the 1950s, and life lessons spelled out oh-so-carefully. In his zip-up sweaters and sneakers, you always felt Mr. Rogers had time for you, time to explain something or give you a hug. Or maybe just listen. 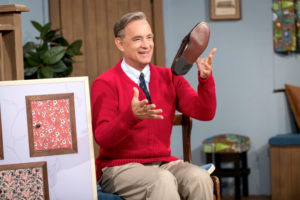 “A Beautiful Day in the Neighborhood” stars Tom Hanks

The movie is sorta, kinda inspired by a true story: an encounter between cynical Esquire writer, Tom Junod (he lives in Atlanta), and Fred Rogers for an issue about heroes.

In the film, Junod becomes Lloyd Vogel (Matthew Rhys), a writer of note, who considers himself an investigative reporter, not someone who delivers puff pieces on kiddie-show hosts. He has an understanding wife (Susan Kelechi Watson), a new baby, and a dad (Chris Cooper) from whom he’s been estranged for years.

Both father and son have anger management issues; an encounter at Lloyd’s sister’s wedding ends in fisticuffs. (Full Disclosure: Juno is a friendly acquaintance, and my impression is that this fractious relationship was manufactured, as Hollywood so often does with true stories).

Anyway, adding insult to injury, so to speak, Vogel must travel to Pittsburgh for his interview with this “hokey kids’ show guy.”

He soon learns that nothing about Rogers (Tom Hanks) is either hokey or kiddie-show saccharine. Rather, the ordained minister is unlike anyone the journalist has ever met.

“You know what’s the most important thing to me right now?” Rogers asks, calling Lloyd before they meet in person. “Talking on the phone to Lloyd Vogel.”

In person, he’s even more saint-like, which his loving wife, Joanne (Maryann Plunkett), cheerfully dismisses. Rogers can get mad. He can feel hurt. He’s as human as any of us. But it’s the way he manifests that humanity that shakes up Vogel. Rogers creates safe spaces for others, be they a Make-a-Wish poster child or a reporter going through a tough time.

I don’t want to make “A Beautiful Day” sound squishy or adoring. It’s a much better film than that – even if Vogel’s backstory of Daddy Issues can be a bit too familiar. 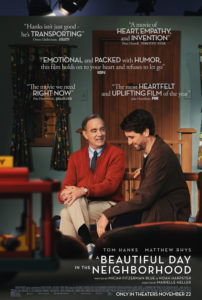 A poster of “A Beautiful Day in the Neighborhood”

It’s what the movie wants us to understand about this amazing man and how director Marielle Heller goes about it that astonishes.

As she did in last year’s marvelous “Can You Ever Forgive Me?” which starred Melissa McCarthy in an Oscar-nominated role as an unhappy writer who resorts to forging letters from famous people to make a living, Heller brings a striking originality and confidence to her work.

She creates Mr. Rogers “neighborhood” in a myriad of ways, ranging from tinker-toy towns to imagined interactions with Vogel as part of the TV show. And she showcases, in an admirably simple way, many of the program’s ever-relevant issues: death, divorce, sadness, etc.

The cast overall is fine, but you can’t help but be drawn to Hanks. It’s essentially a supporting role, but he does it with the same precision and emotional intelligence he brought to  “Sully” or “Bridge of Spies.” This is a deceptively major performance.

By the end, you don’t just think of Fred Rogers as a miracle worker. You think of him as something of a miracle himself, flaws and all.