A scene from "A Quiet Place: Part II"

My guess is, when John Krasinski directed, co-wrote and starred in 2018’s “A Quiet Place,” he wasn’t thinking about a sequel.

But the film was so successful, he made one anyway.

You can’t really blame him, especially given that the critical feedback was so positive, too. Who among us dislikes being praised and making buckets of bucks? 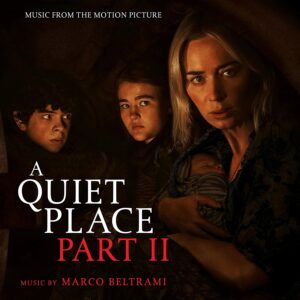 Hence, “A Quiet Place Part II,” a tepid set-up for a potential franchise.

It begins well, taking us back to small-town America on the day the murderous, sound-sensitive insects from outer space arrive. Krasinski, who’s returned as director and writer, does a fine job of reminding us of the constant noise that constitutes everyday life, from the cheers at a local Little League game to an incessantly barking dog.

It’s all lovely until a strange phenomenon appears in the sky over third base. As the little girl so memorably said in “Poltergeist,” “They’re heeere….”

Krasinski orchestrates this prologue expertly, playing on our foreknowledge of what’s about to ensue. It’s the most unsettling part of the movie.

Flash-forward 474 days. We are now post-“A Quiet Place.”  The diminished family from the first film – Evelyn (Emily Blunt), deaf daughter Regan (extremely well-played by deaf actress Millicent Simmonds), son Marcus (Noah Jupe) and her newborn baby – have apparently embraced a nomadic existence, keeping on the move as a way of keeping the insect aliens at bay.

At some point, they run into another survivor, a former neighbor named Emmett (Cillian Murphy). He, too, is traumatized by loss, fear and loneliness. And maybe by hearing Bobby Darren’s “Beyond the Sea” broadcast on his transistor radio all day, over and over.

It’s Regan, the movie’s hero, who realizes the song is a signal of some sort – possibly from other survivors. She sets out to find them, which effectively splinters our protagonists into small groups as Emmett reluctantly goes to find her, and Evelyn heads for a nearby pharmacy to find pain medicine for Marcus, who’s been injured. He, in turn, is left behind as the scared-to-death guardian of the newborn. 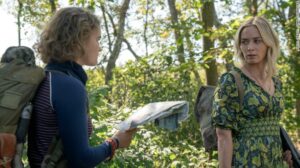 A scene from “A Quiet Place: Part II”

The differing storylines weaken the overall effect as we are pretty much reduced to watching how each inevitable confrontation with the alien thingies will go. The movie becomes alarmingly reminiscent of any given season of “The Walking Dead,” with outer-space spiders instead of zombies. Not that that’s necessarily a bad thing – as my pals Margaret, Lee and Kristie will attest, I was a “TWD” fan for several seasons.

But we’ve been to this post-apocalypse territory before and Krasinski can’t seem to come up with many surprises. Further, the aliens, though expertly designed to be as icky and aggressive as possible, somehow prove the less-is-more theory. They were very sparingly used in the original picture, but they’re all over the place here. And the more we see them, the less frightening they become (despite the admirable yuuuck factor).

“A Quiet Place Part II,” which opened in theaters a year after its original pre-Covid release date and is now on VOD, is pretty much an honorable failure. But it’s also the most persuasive argument I’ve seen for returning to the movie theaters.

Watching the first film with an audience silenced by its impressive shhhhhh….! premise was a memorable experience. At home, with the dog barking and the baseball game on in another room, well, not so much.