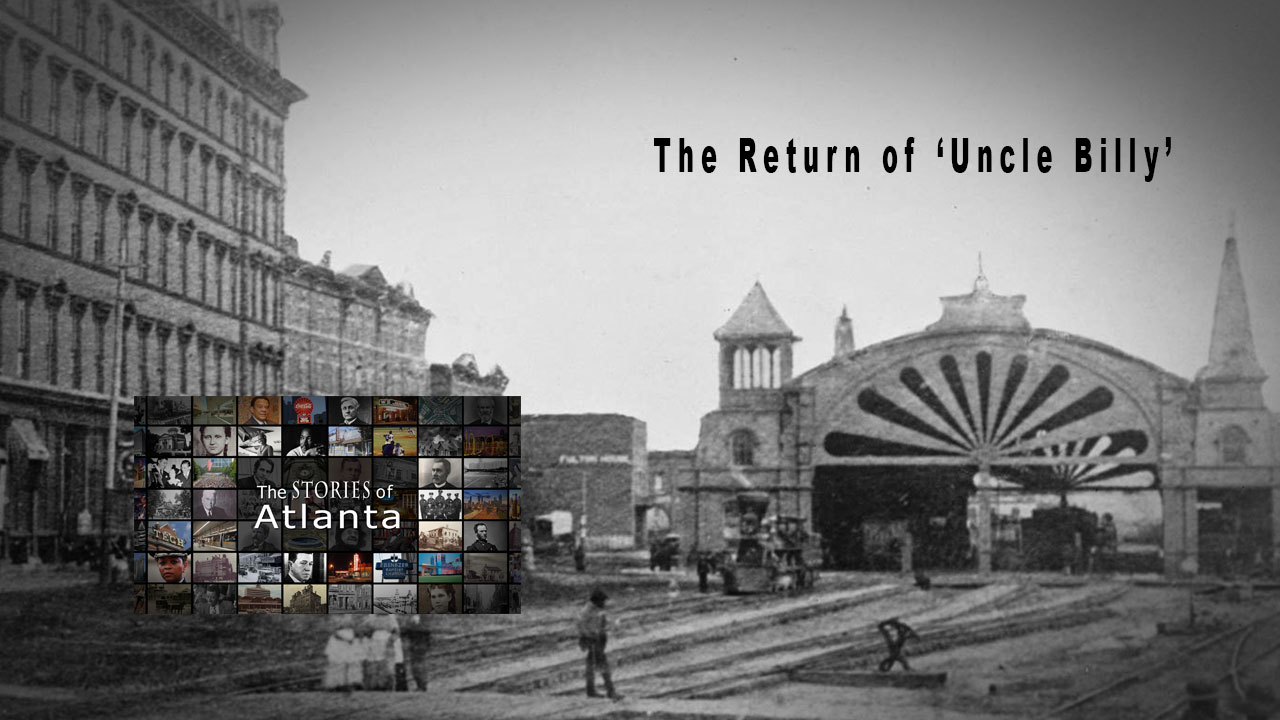 In November of 1864, having occupied Atlanta for a little over two months, William Sherman left the city to continue his march to the sea. About three miles out, he paused briefly and gazed back at Atlanta. Years later he wrote of that moment, “Behind us lay Atlanta smoldering and in ruins, the black smoke rising high in the air and hanging like a pall over the ruined city.” And though Sherman’s destruction of Atlanta had received help from a retreating Confederate army, there is no question that what Sherman left behind was less than the shell of a once promising community.

In the Spring of 1864 about 22,000 people lived in Atlanta, only 3,000 remained at the time Sherman entered the city and all of them had been ordered to leave during Sherman’s occupation. The spectacle that greeted the citizens who returned after Sherman left must have been shocking. Gone were the railroad lines that had fostered Atlanta’s phenomenal growth, so to the Union train station, the railroad roundhouse, the rolling mill factory, the arsenal shops and the cannon factory, along with every building within a quarter mile of the Confederate exploded munitions train. Of the 3,600 homes that surrounded the city, only 400 remained.

The destruction of buildings and property were the easily recognized manifestations of a defeated city. What was soon to be discovered was the utter and complete debilitation of the city’s infrastructure. As John Bell Hood’s army made its hasty retreat out of Atlanta and ahead of Sherman’s army, his soldiers had looted anything they could carry. For his part, Sherman had used the two month occupation of Atlanta to resupply his army before destroying Atlanta’s capability to wage another war. And when he left, nothing of use remained. No animals, no food, no growing crops, no hardware, no wagons…nothing but ruins.

What is even more remarkable is that only two years after the end of the Civil War, the population of Atlanta had swelled to 20,000 determined people. Over the next decade Atlantans, propelled forward with a new found sense of destiny, would rebuild their railroad system which, in turn, would fuel a city bigger and better than it was before the war. And from that rebuilt infrastructure, Atlanta would become known as the “Gate City.”

And it was in January of 1879 that Atlantans welcomed, with enthusiasm, a special visitor to the “Gate City.” A visitor that is the subject of this week’s Stories of Atlanta.