A running log from HQs of Stacey Abrams and Brian Kemp 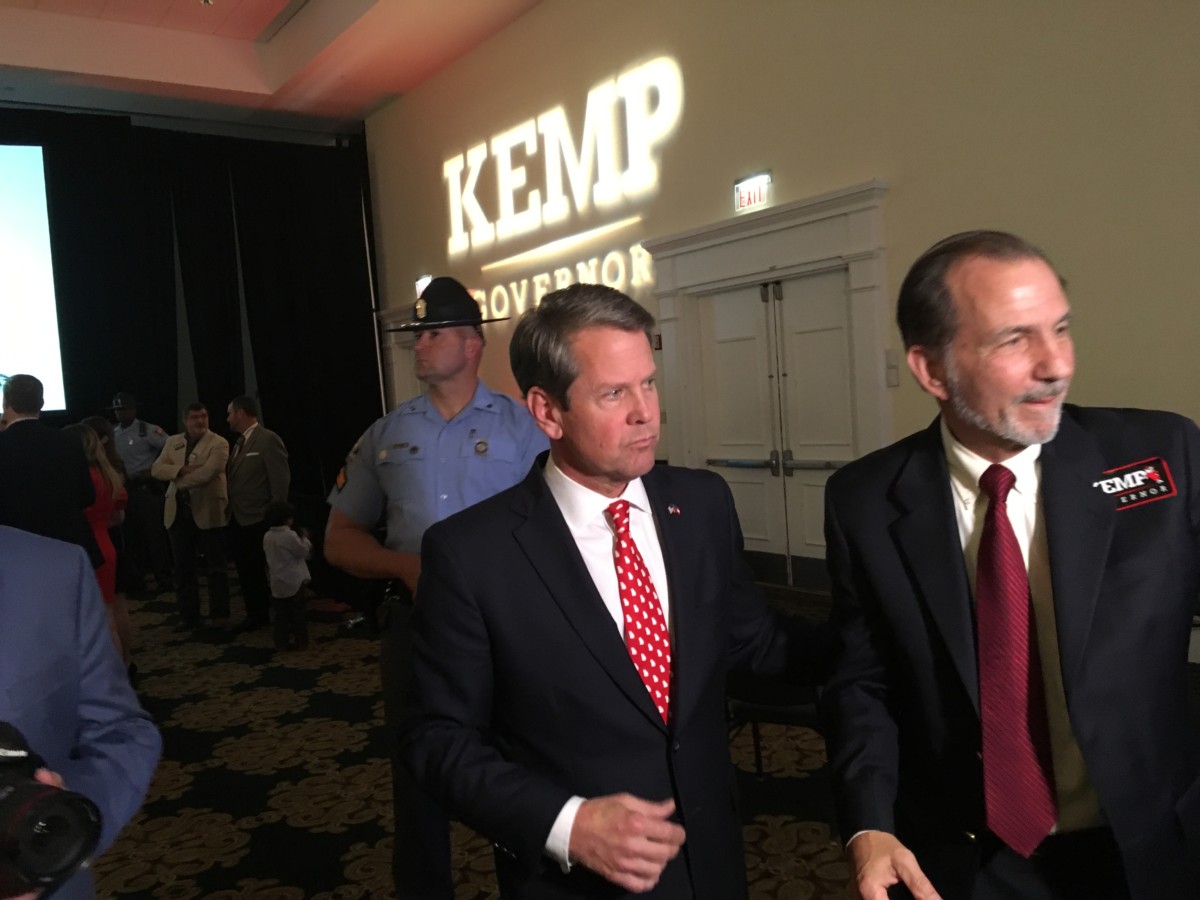 Kemp began with a speech thanking his supporters and talking about his campaign platform: “I built this campaign on one promise: that as governor I would put hard-working Georgians first.”

But he did not claim victory, exactly.

“There are votes left to count but we have a very strong lead and folks, make no mistake, the math is on our side to win this election,” Kemp told the crowd.

“We are waiting on the final results but I’m confident victory is near,” he said.

He and his campaign communication staff in the room declined any further comment.

Abrams says it’s not over.

“Votes remain to be counted. There are voices that are waiting to be heard,” she told her supporters in Atlanta. She said absentee ballots had yet to be counted. 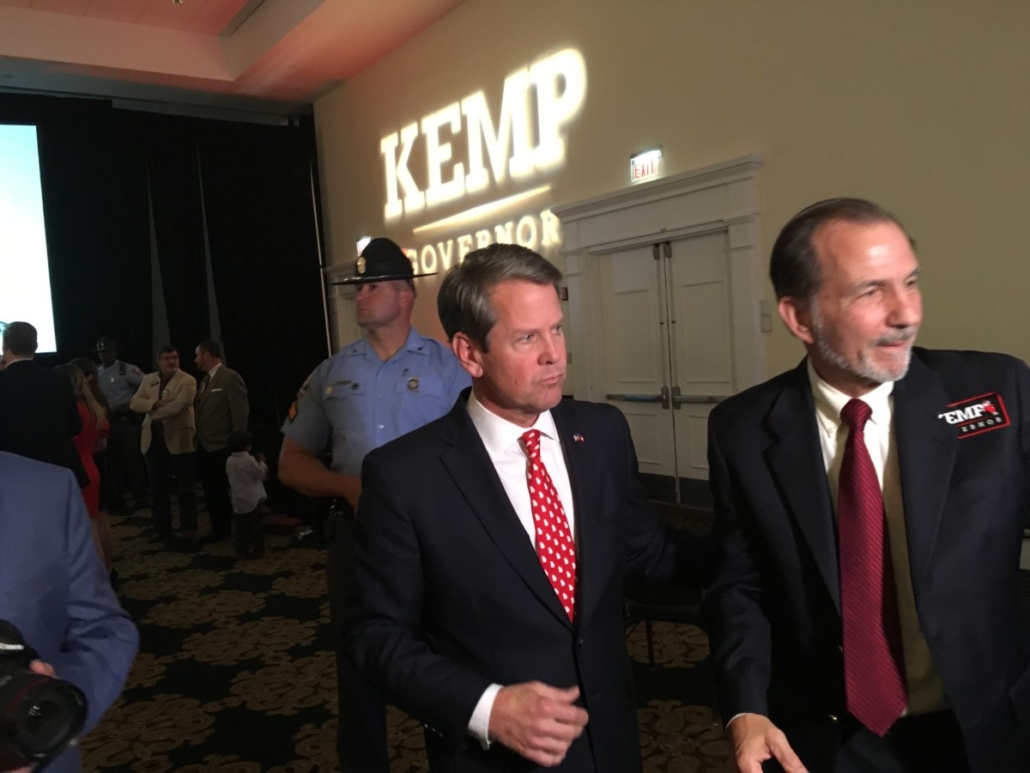 Nov. 7, 1:42 a.m. Classic Center in Athens: The crowd is thinning, not from discouragement, but from it being 1:42 a.m. A few hundred die-hards still in the ballroom.

Nov. 7, 12:55 a.m. Atlanta. Ran out of steam, left the Hyatt without getting any sight of Stacey Abrams. Back at home – watching returns in the comfort of my living room before falling asleep. The Georgia governor’s race still hasn’t been called. 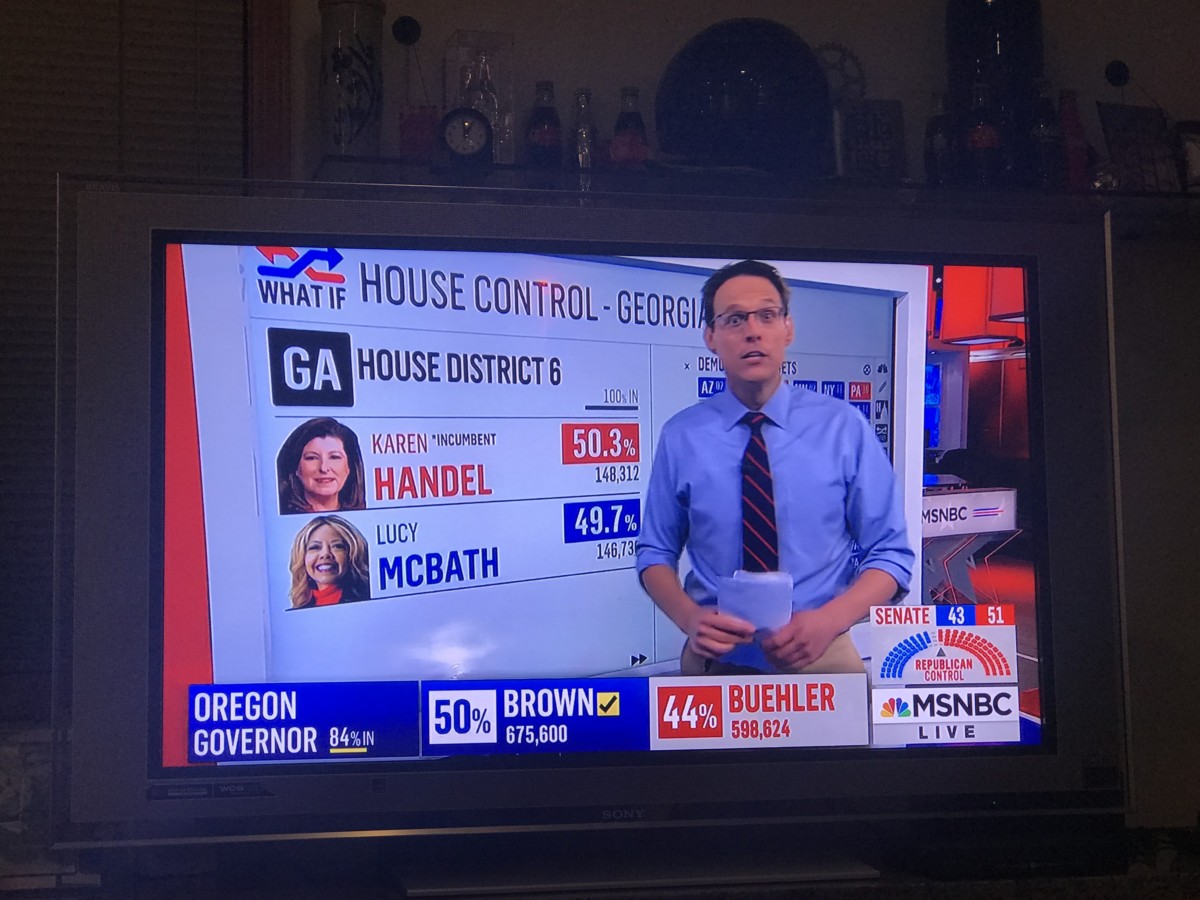 “The elections are getting tougher,” he said, thanking crowd for their support in his victory.

11:50 p.m. Classic Center in Athens: Folks are starting to crowd into the ballroom at Brian Kemp’s watch party. Loud cheers for occasional clips from Kemp ads played now and then between songs on a mostly country playlist. 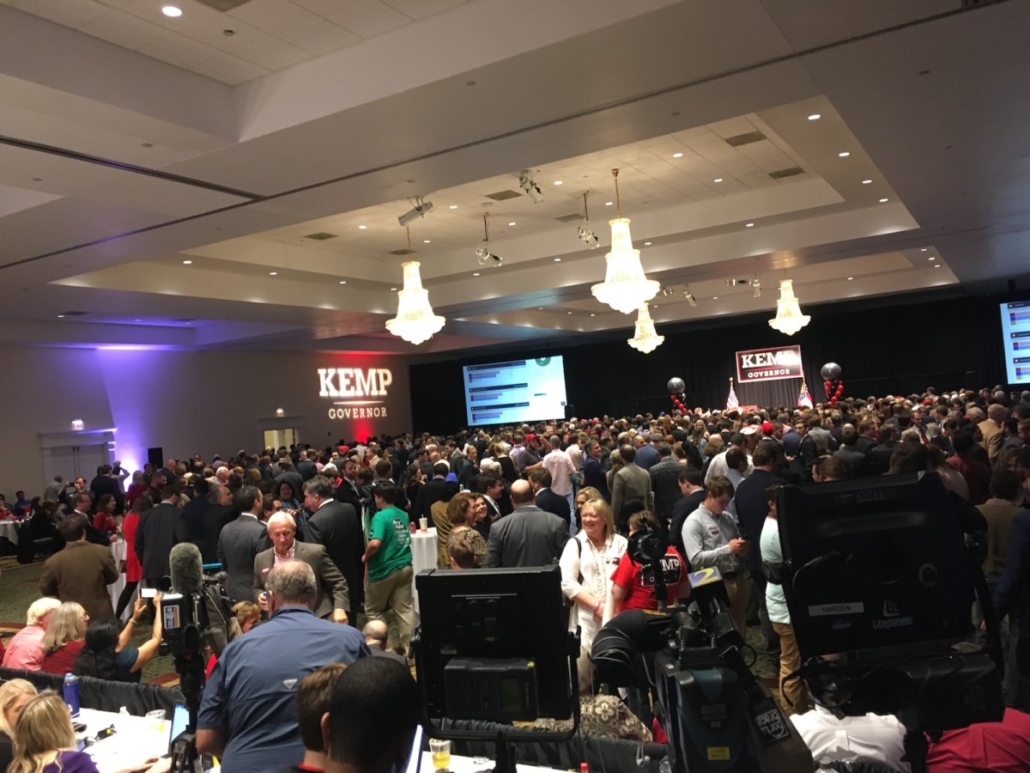 11:30 p.m. Hyatt Regency Atlanta: Jason Esteves, chair of the Atlanta Board of Education, admitted that the national election results have been a bit disappointing. But he begins to lead the crowd in a chant for Stacey, Stacey, Stacey…  Outside the ballroom, State Rep. Calvin Smyre and Georgia Democratic Party Chair DuBose Porter say that a lot votes from Atlanta and DeKalb still need to come in. Several different performers have entertained the crowd at the Hyatt Regency – from hip hop to singers to dancers – have helped  keep the crowd fired up. 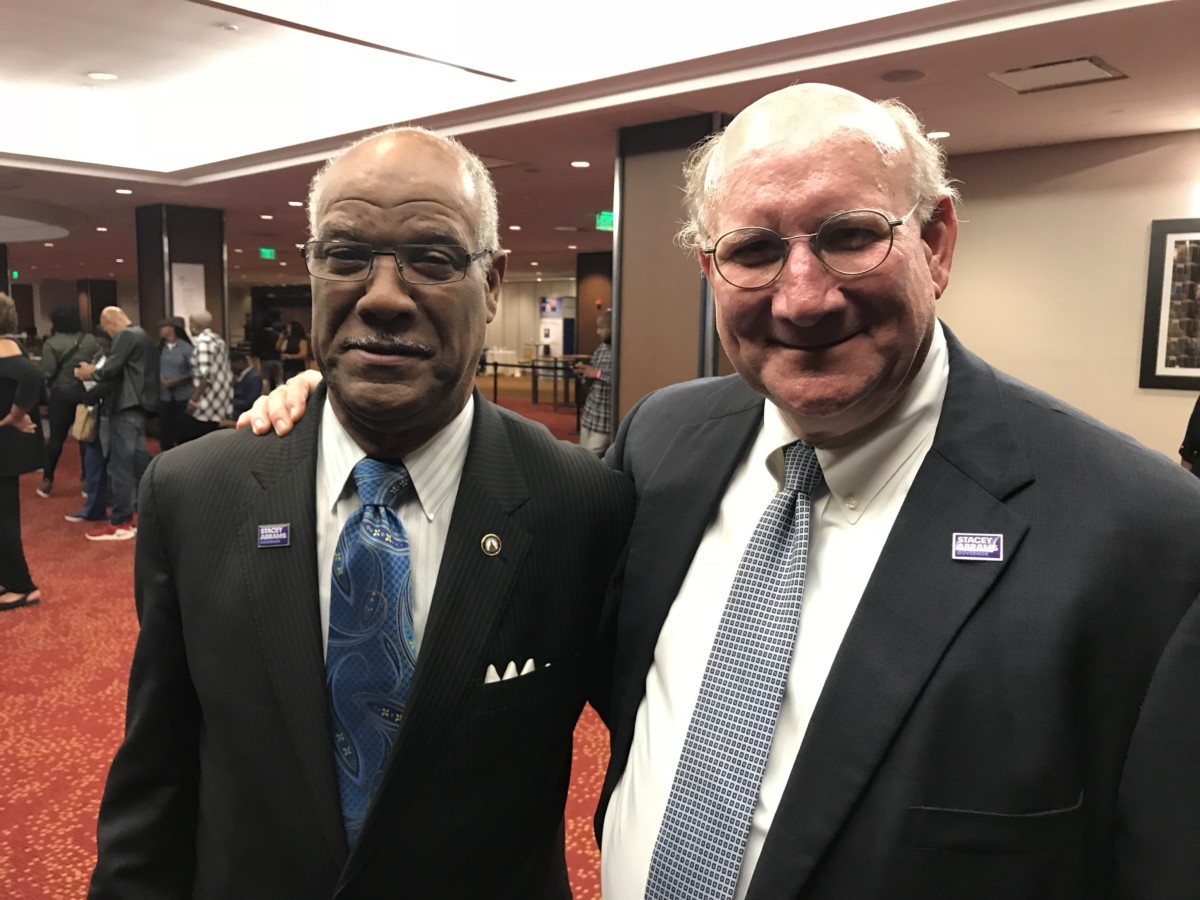 10:45 p.m. Hyatt Regency Atlanta: State Sen. Nan Orrock takes the stage saying the Democrats had put together a dream team up and down the ticket. Although the numbers that have been posted in the governor’s race show that Stacey Abrams is running behind, speakers keep trying to rally the crowd by saying she will be Georgia’s next governor. The mood in the room however feels a bit defeated. 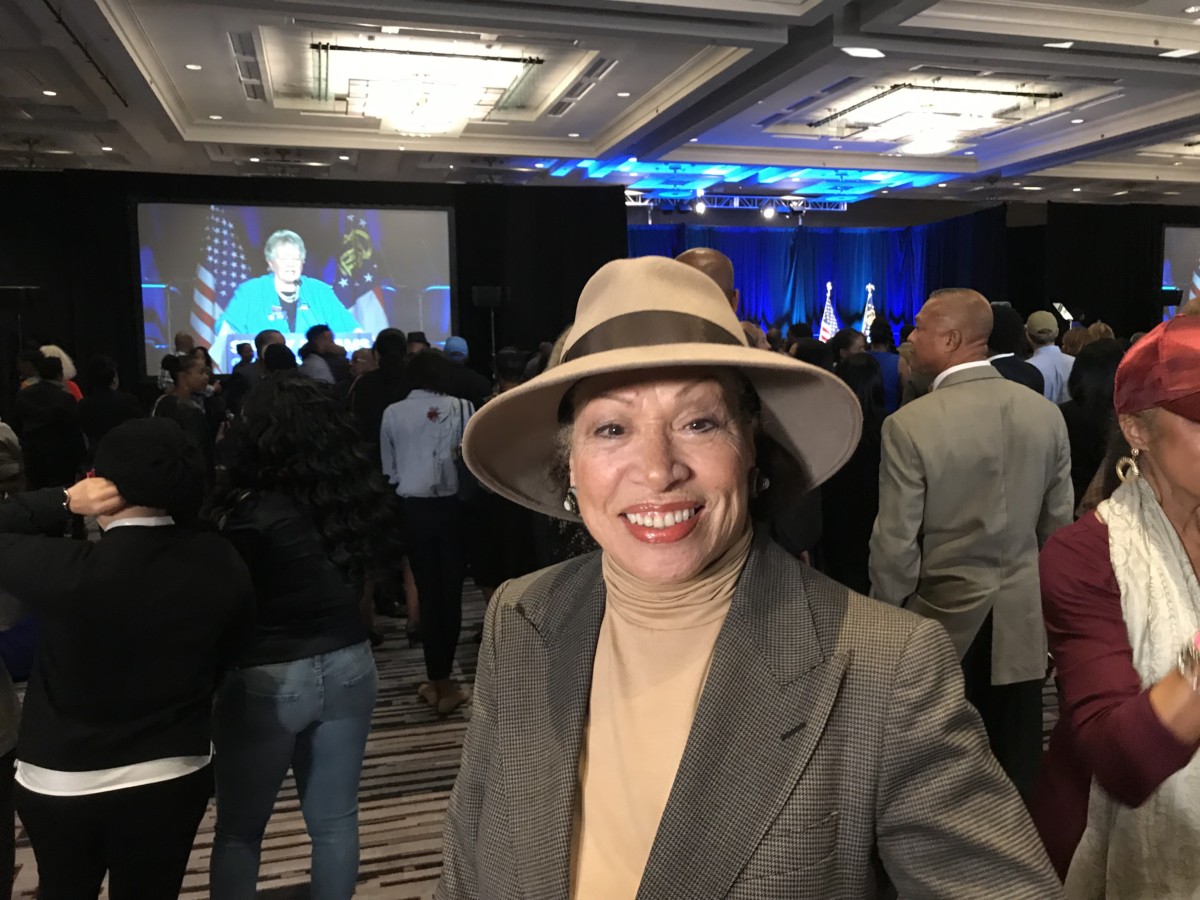 As the clock ticks toward 11 p.m., most folks are standing around chatting, and waiting.

Some are sure of GOP victories all up and down the ticket. Others see chances for runoffs. For a win, a Georgia candidate has to win 50 percent plus one vote. That means in races for governor, secretary of state, insurance commissioner and two public service commission seats, a runoff is possible. There are three candidates in each of those races: a Democrat, a Republican and  a Libertarian. 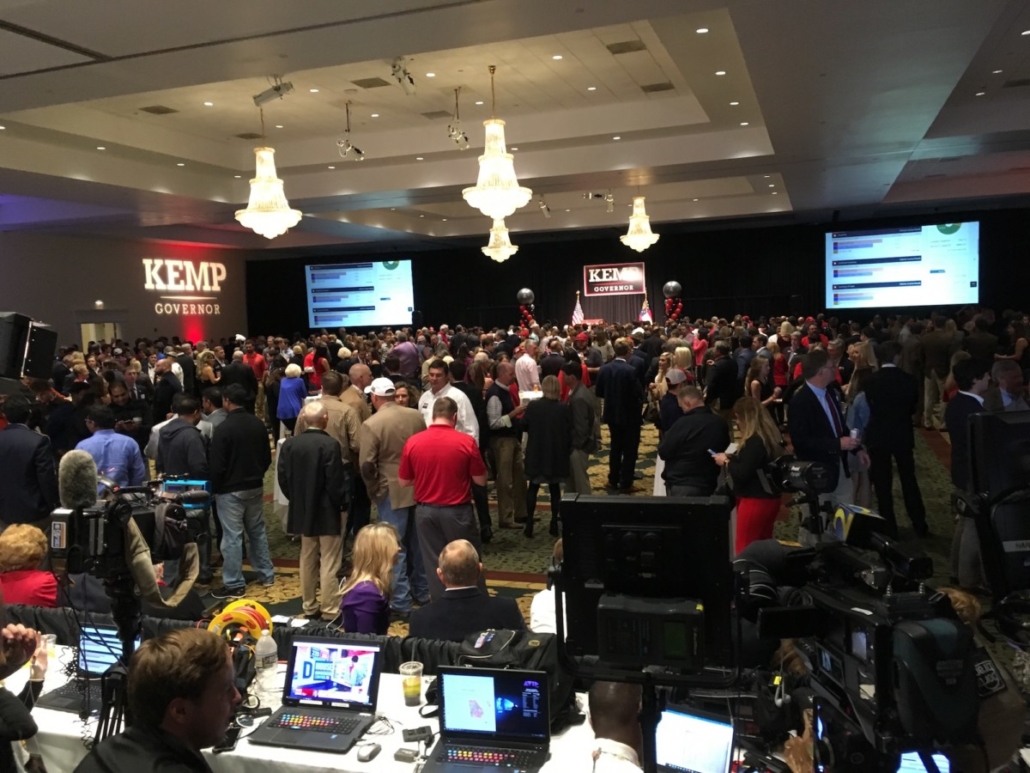 10:01: Hyatt Regency Atlanta: U.S. Representative John Lewis takes the stage and tells the crowd to not give up. 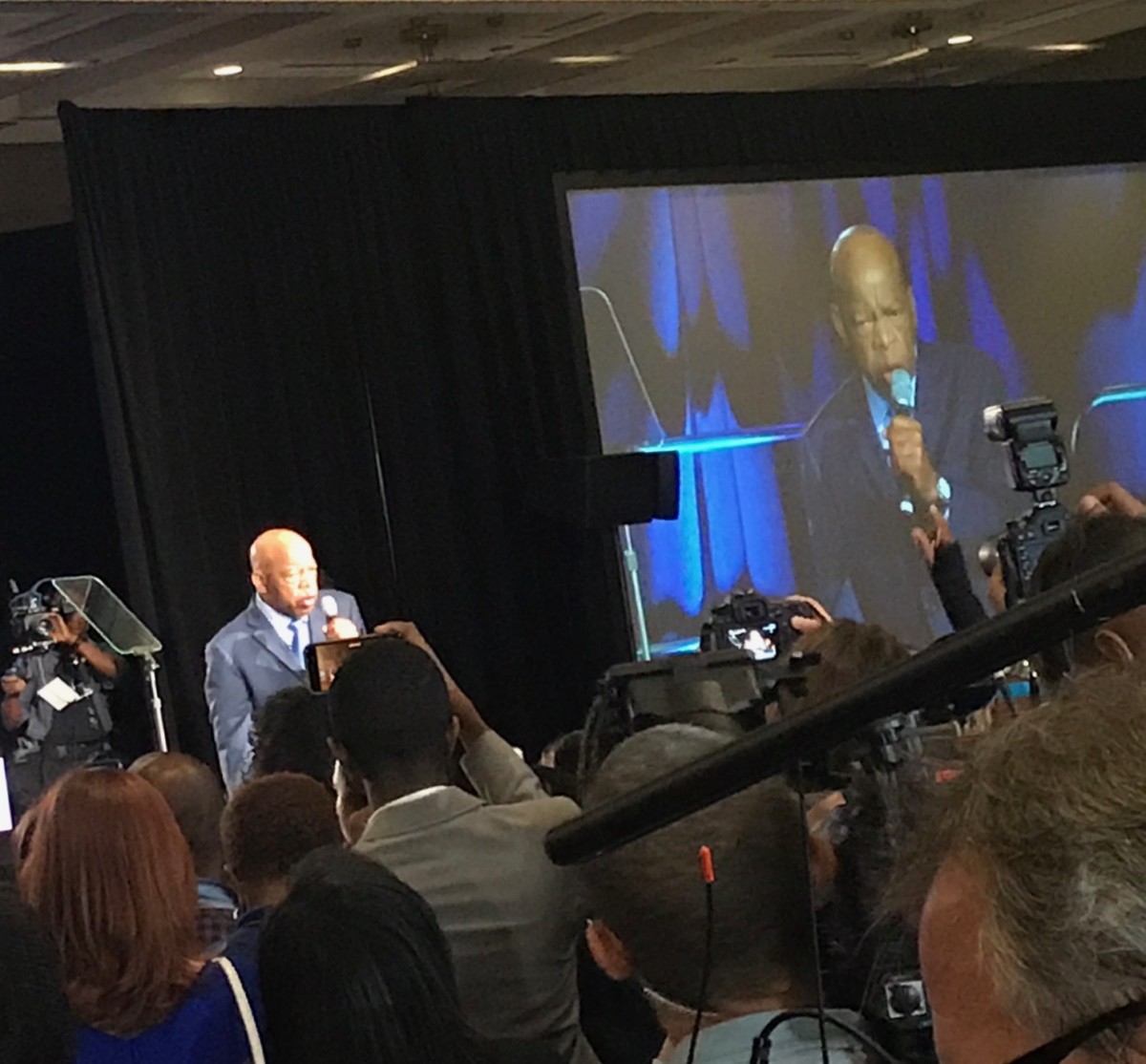 9:50: Hyatt Regency Atlanta: Atlanta Mayor Keisha Lance Bottoms takes the stage, remembering being in the same spot a year ago – during the General Election, which got her into the run-off. She celebrated her victory a few weeks later. 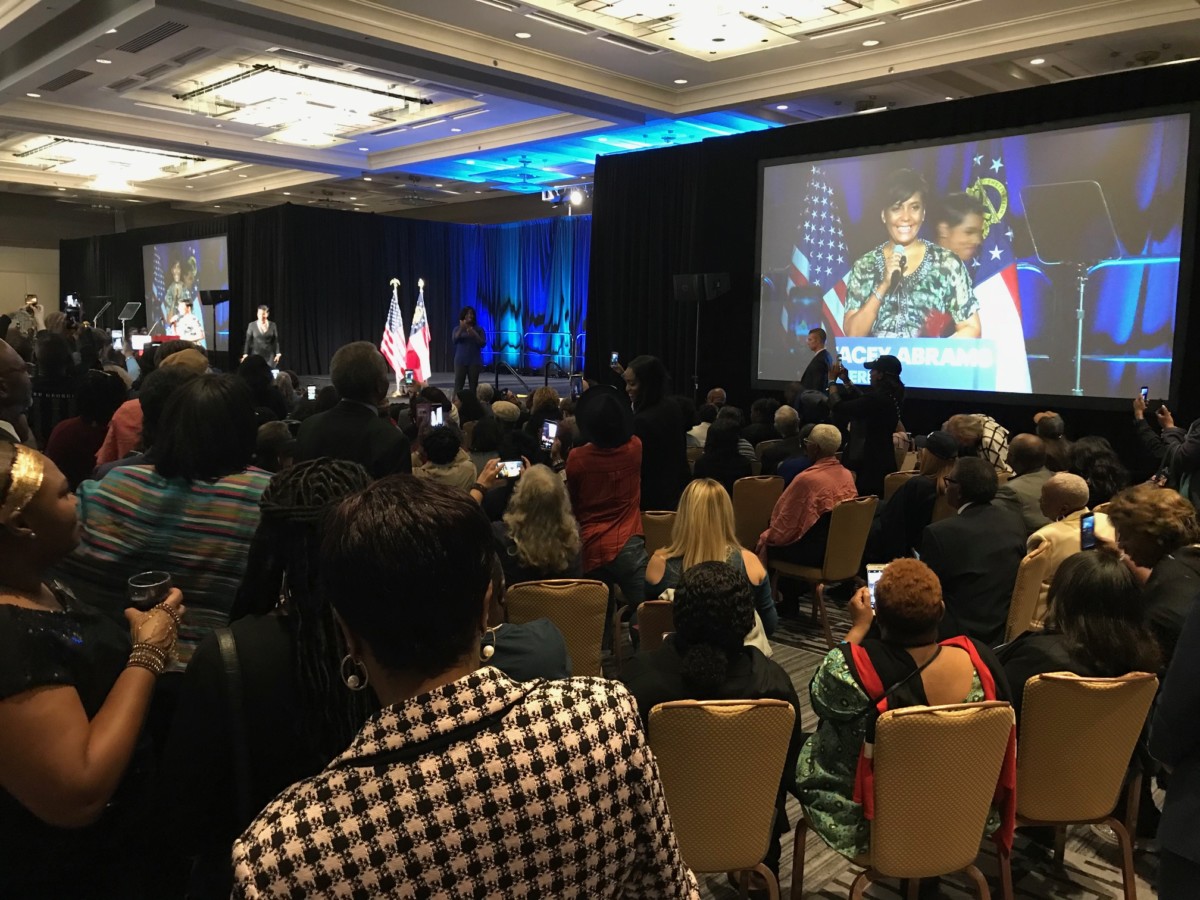 Gov. Deal said Georgia is prospering because Republicans all across the board  are working hard at the local, state and federal levels of government. Sandra Deal, like the governor, endorsed Kemp heartily and said she’d like to see a family in the governor’s mansion to help take care of it.

Both Kemp and Abrams have talked about their families extensively on the campaign trail. For Kemp, it’s a wife and three daughters.  For Abrams, it’s her parents, siblings, nieces and nephews. 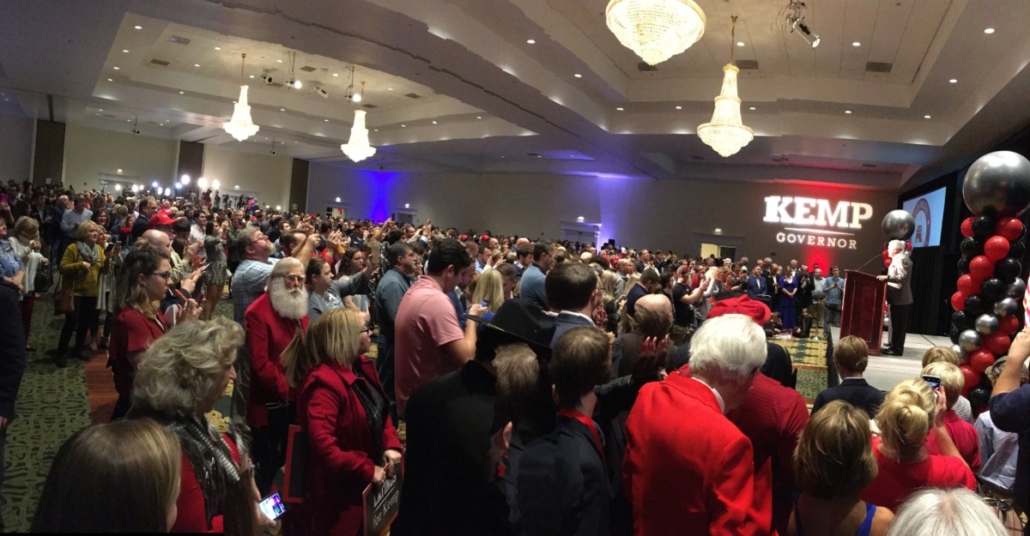 9:21 p.m. Hyatt Regency Atlanta: Georgia Democratic Party Chairman DuBose Porter addresses the crowd and mistakenly says Stacey Evans instead of Stacey Abrams. Abrams defeated Evans in the Democratic primary. “It’s been a long day,” Porter said after realizing his slip-up. Then he told the crowd that it will be a long night. 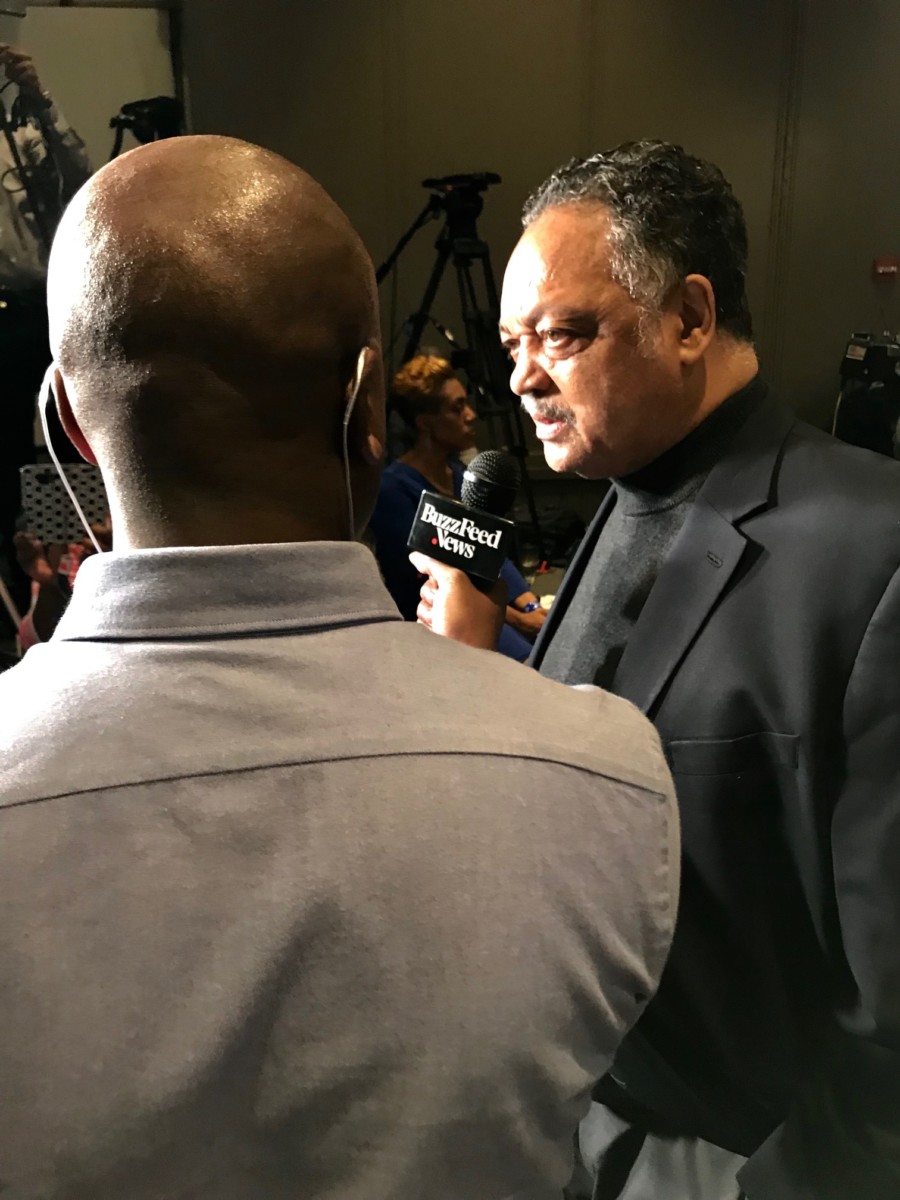 Perdue and Isakson both praised Georgia Gov. Nathan Deal and former Gov. Sonny Perdue, saying GOP leadership has made Georgia prosper, and that it would continue under a Gov. Brian Kemp.

Graves said the “red wall” is tall, strong and its footing is deep in Georgia. 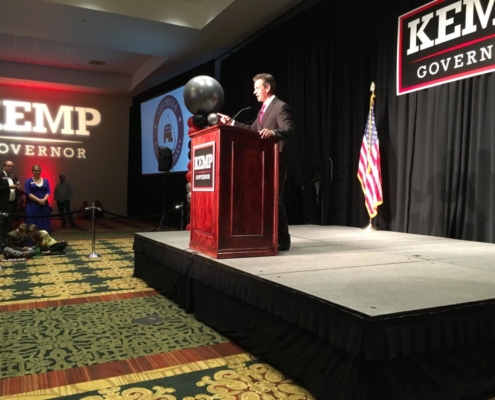 8:50 p.m. Hyatt Regency Atlanta: The national media has shown up in force to cover the Stacey Abrams campaign event. There’s no more room on the risers as dozens of TV cameras angle for position. 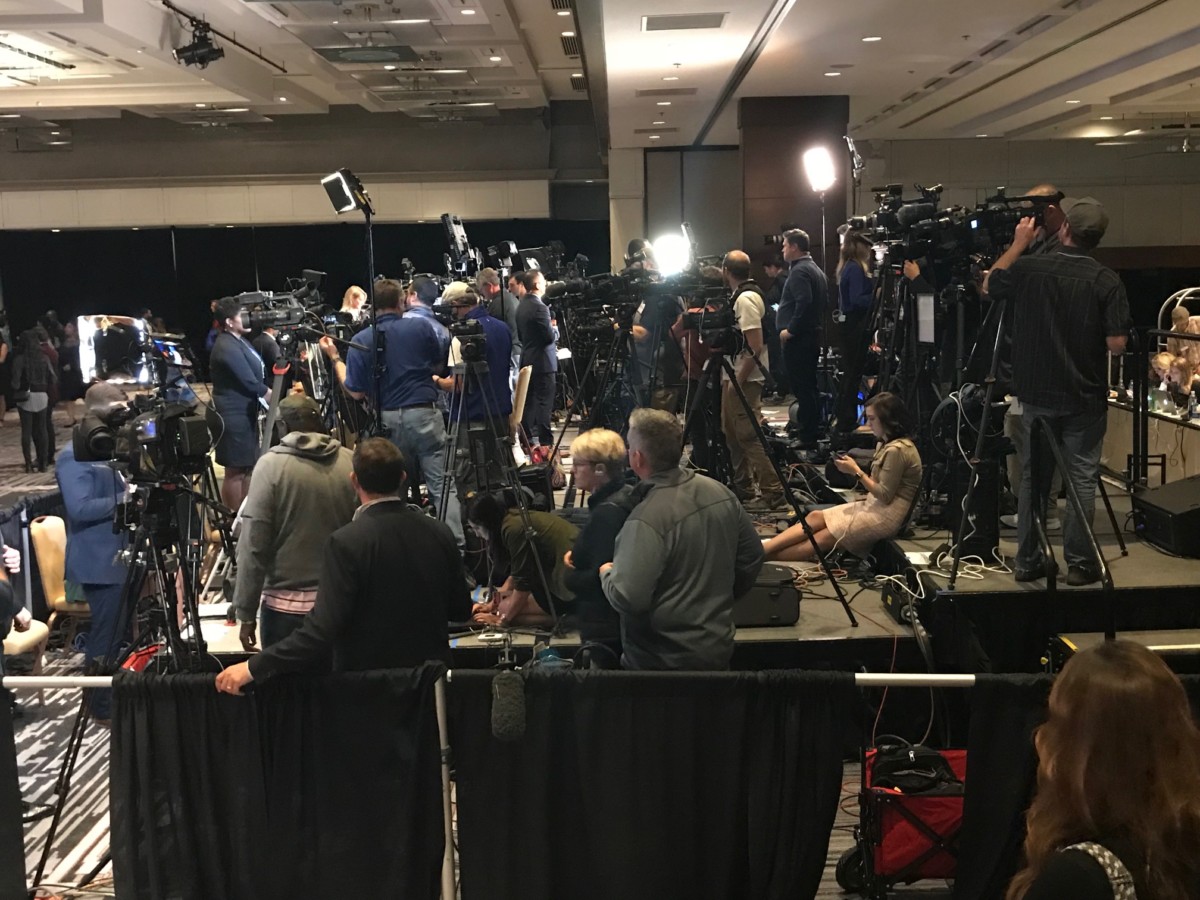 8:45 p.m. Hyatt Regency Atlanta: The ballroom beginning to fill up. Before all the people came streaming in, NBC’s Rehema Ellis does a live shot with the Stacey Abrams sign in the background 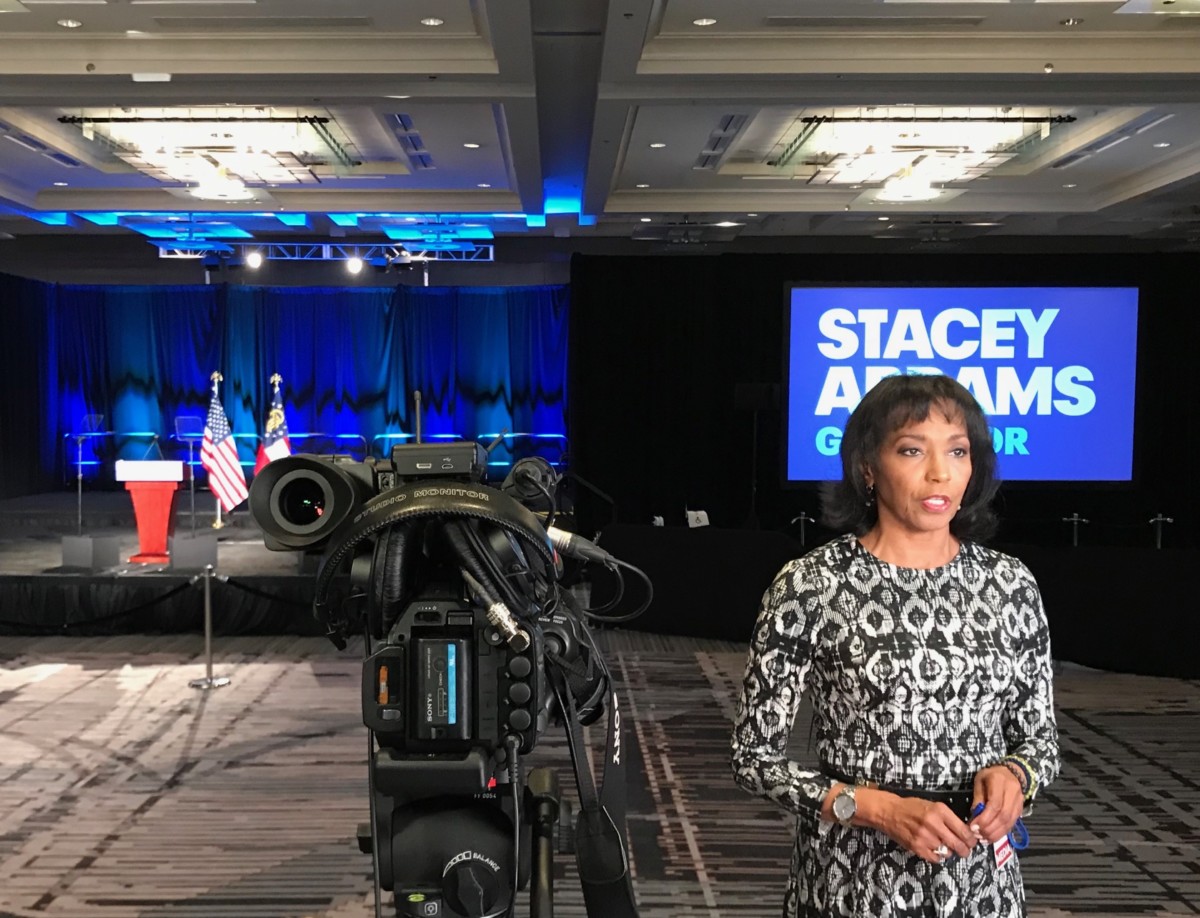 8:35 p.m. Classic Center in Athens: A few hundred people are already inside this downtown Athens ballroom.  With about 600,000 votes in, Kemp is ahead and his supporters expect that lead to hold. (Live results here.)

In a short speech to the crowd, U.S. Sen. Johnny Isakson said that the rest of the country wants to be like Georgia, but they just don’t have the kind of Republican Party that the Peach State does.

“The turnout we’re seeing isn’t by accident,” said Isakson. “Something’s going on.” People are seeing the president and the prosperity of the United States and saying, “That’s something I want to be part of,” he said. 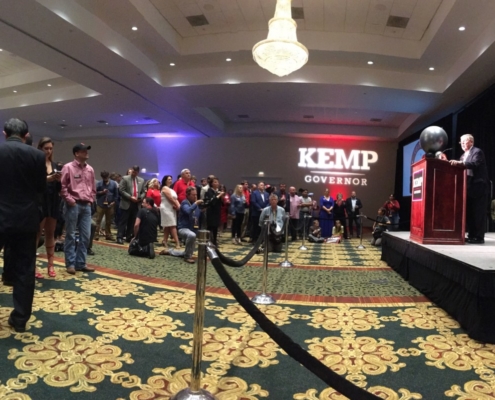 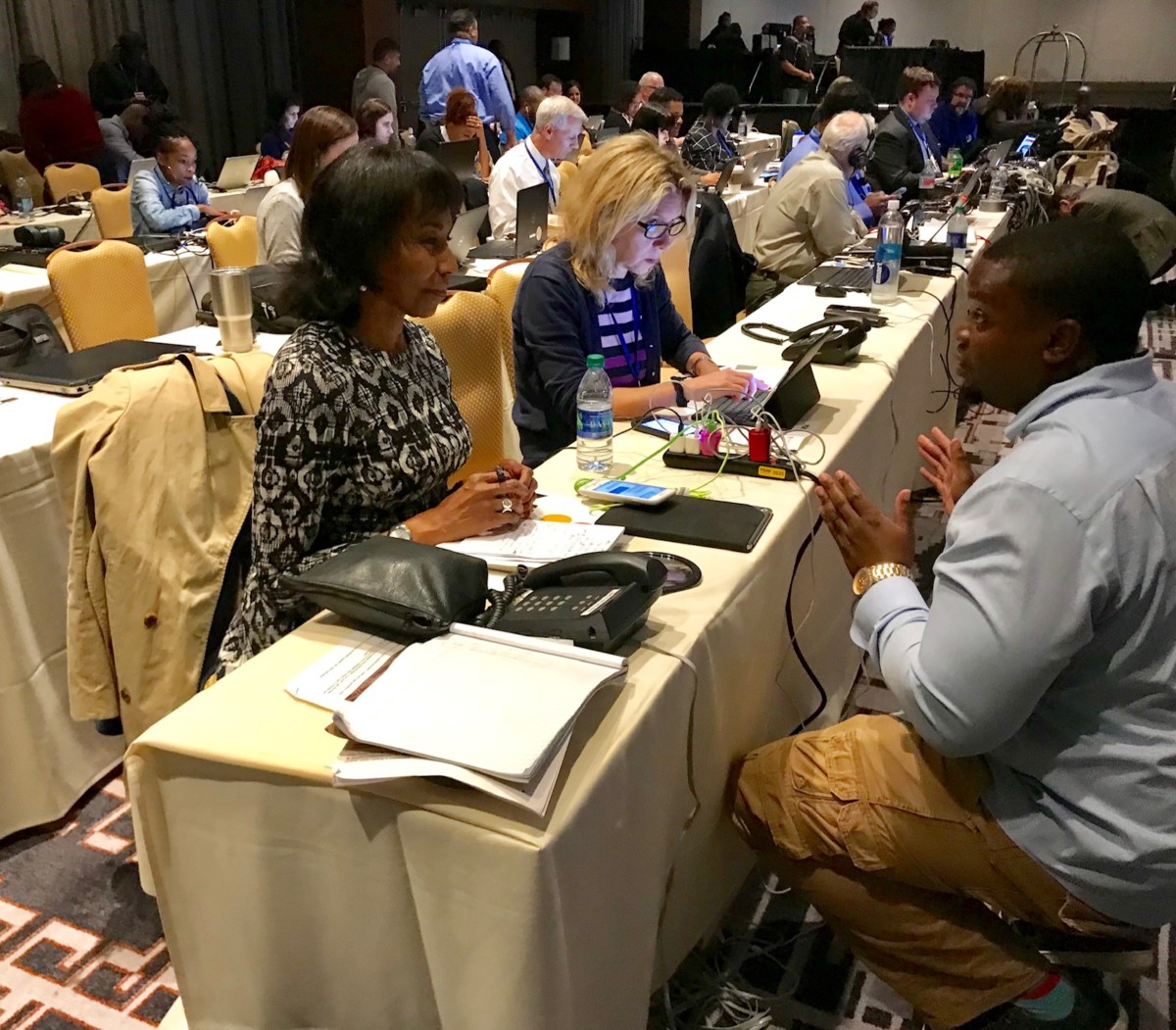 8:25 p.m. Hyatt Regency Atlanta: Reporters get early access to the ballroom to set up their equipment. All the seats for the press and spots for television cameras are filled up. Representatives from media outlets in the country are present. 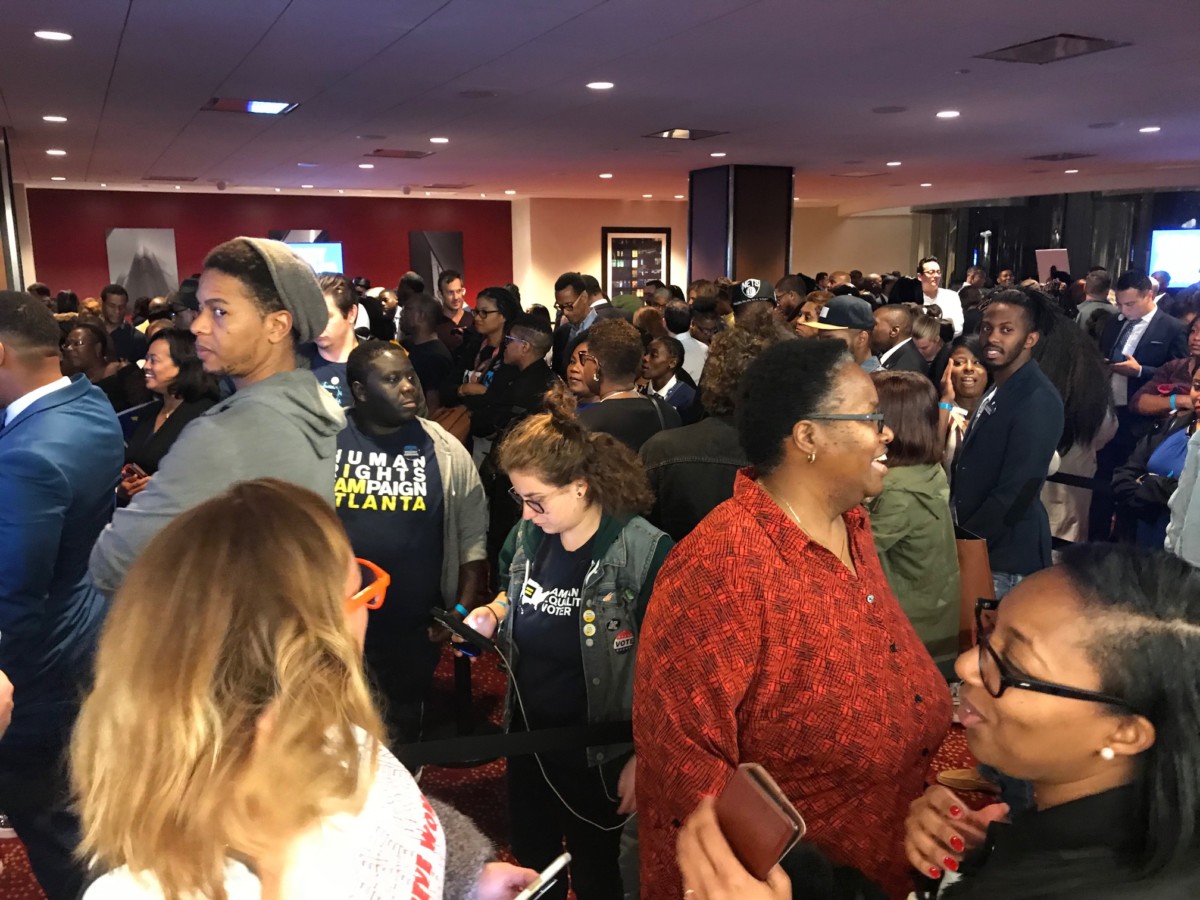 SaportaReport will have people on the scene Tuesday night at the campaign headquarters of Republican Brian Kemp in Athens and Democrat Stacey Abrams at the Hyatt Regency Atlanta.

Maggie Lee is in Athens. Maria Saporta in Atlanta.

We will provide regular updates and photos from both campaigns in this running election-night log. Please keep checking this space. 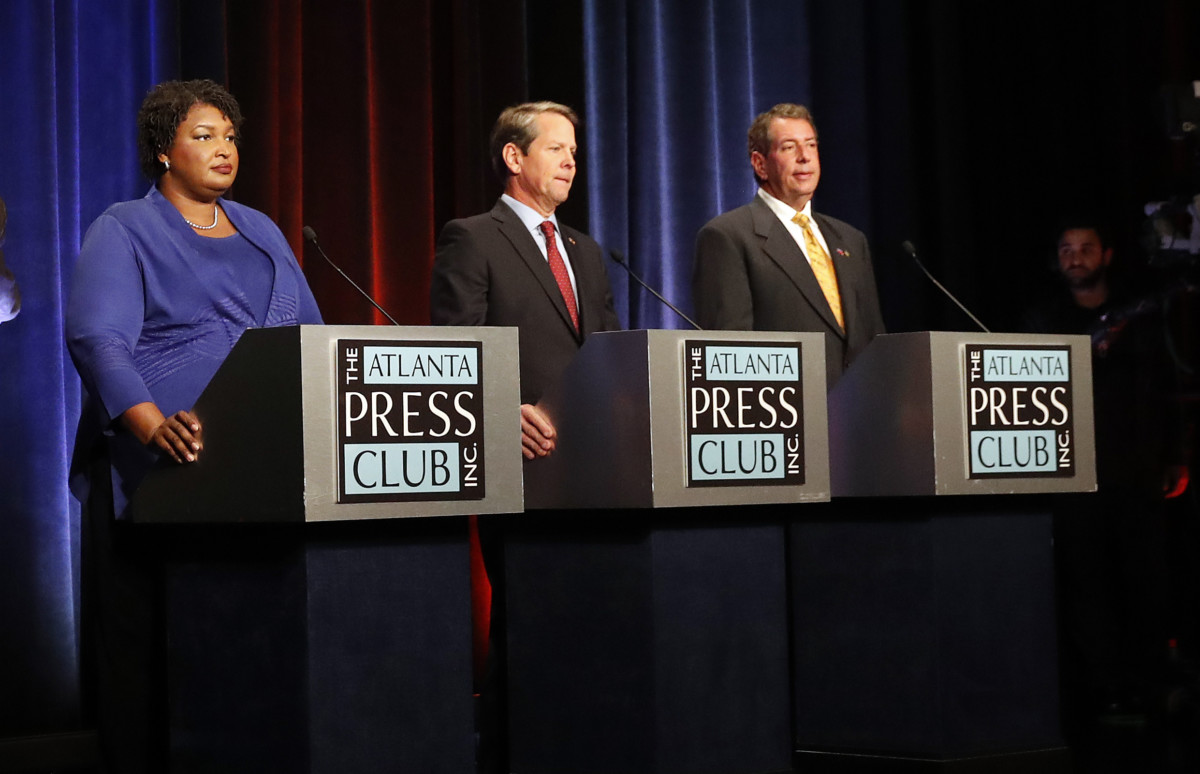 Previous Article
ATL, with or without Amazon, poised to cement its role as a major tech region
Next Article
Georgia Trust’s 2019 ‘Places in Peril’ list includes two Atlanta theaters