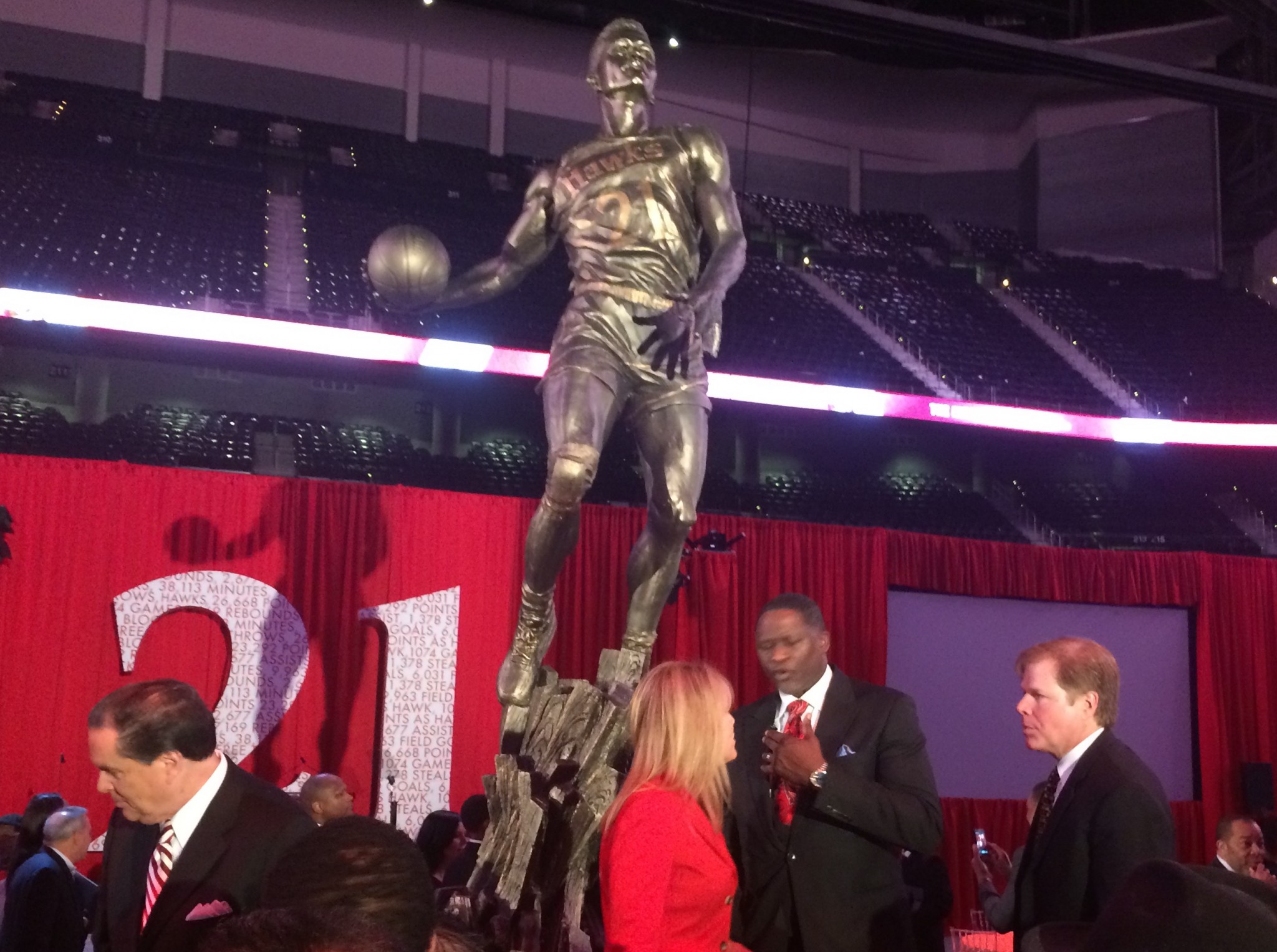 Dominique Wilkins talks to Laura Turner Seydel and Rutherford Seydel, one of the minority owners of the team, after the unveiling of the statue

Forever 21. Atlanta now will have a new statue honoring one of its true sports legends – forever.

Dominique Wilkins was immortalized Thursday when a statue of him getting ready to lift his right arm to make a slam dunk was unveiled before of a Who’s Who of basketball legends and Atlanta dignitaries.

A running theme of several speakers – including former teammate Kevin Willis – was what took Atlanta so long. 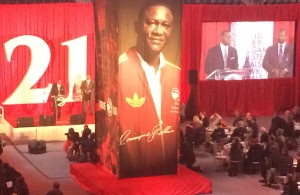 “You are one of the best players this league has ever seen,” Willis said. “That statue you are about to receive, you deserved it a long time ago.”

A nearly four-hour luncheon program and ceremony that culminated with the unveiling of the gold-painted statue erected on an unusual base took place on the floor of Philips Arena as part of the three-day series of events honoring Wilkins.

The statue will be moved to is permanent resting place in front of Philips Arena near one of the ‘A’s in large-lettered A-T-L-A-N-T-A sign along Centennial Olympic Park Drive. 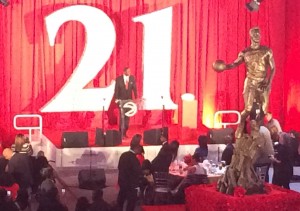 An issue that did not come up during the ceremony was who would own the statue.

This has become a much more relevant issue now that “Atlanta” Braves are moving the team to Cobb County. The team has stated that it plans to move the statue of Henry Aaron hitting homerun # 715 – which broke Babe Ruth’s record – out to Cobb County along with the new stadium.

But others are saying not so fast.

Evidence shows that it was the civic community of Atlanta – Henry Aaron’s fans – who raised the money for the statue, and they donated the statue to the Atlanta-Fulton County Recreation Authority.

On Thursday, Fulton County Commission Chairman John Eaves said he would be writing a letter stating his position that the Aaron statue needs to stay in Fulton County.

Given that controversy, the question of who owns Dominique Wilkins’ statue is particularly relevant.

Apparently the Atlanta-Fulton Country Recreation Authority paid for the base of the statue, and it is located on property owned by the authority. But the Atlanta Hawks and members of the community have raised the money for the actual Wilkins statue. And the Atlanta owners of the team have quietly said they would cover any cost overruns.

Wilkins credited sculptor Brian Hanlon for first promoting the idea of a statue in 2008. And then Atlanta businessman Tommy Dortch took on the cause – working for more than two years to get community and financial support for the project. 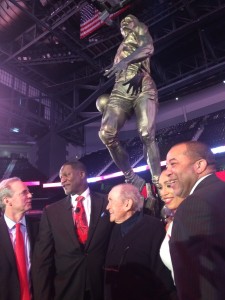 Wilkins said the Atlanta owners of the Hawks – Michael Gearon Jr., Michael Gearon Sr. and Rutherford Seydel – were instrumental in seeing the project through.

“I love you guys,” Wilkins said, adding that the statue and the changes that have occurred this year have “set up a new era” for the Atlanta Hawks.

He then spoke highly of Steve Koonin, who was brought in last spring to become CEO of the Atlanta Hawks, saying he had brought a breath of fresh air to the organization. “We have become very close,” Wilkins said. “We couldn’t have a better person at the head of our organization.”

Wilkins also said the statue represented something even deeper for the Atlanta Hawks and the city. We can embrace change while respecting and honoring our history.

“What this statue says is that we have this history here in Atlanta,” Wilkins said.

For those who closely follow the Hawks and listened carefully to Wilkins’ words, it was significant to hear what the Hawks All-Star did not say. Not once did he mention Danny Ferry, the general manager who has been on a not really voluntary leave all season. He also did not mention any of the owners of the team.

But he gave full credit to the current players on the team, to its coaching staff and especially to head Coach Mike Budenholzer.

“I can’t tell you how proud I am of them,” Wilkins said. “Make no mistake. Coach Budenholzer is the orchestrator of what’s being done in Atlanta.”

NBA Commissioner Adam Silver even took notice of what was happening in Atlanta when he told the audience what an honor it was to be in Atlanta for the statue unveiling as well as to be with a team that sent four players to the All-Star game and that currently had the best record in the league.

Silver credited Wilkins for having been the heart and soul of the Atlanta Hawks – both as a player and as a member of the organization and larger community – for more than a quarter century. 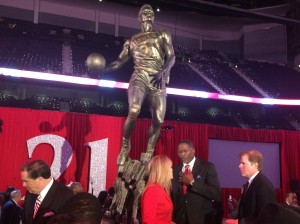 Dominique Wilkins talks to Laura Turner Seydel and Rutherford Seydel, one of the minority owners of the team, after the unveiling of the statue

Wilkins, however, was quick to tell his former team-mates and current associates with the Atlanta Hawks: “I didn’t do this alone. We did this together.”

He then singled out the Gearon family and Rutherford Seydel for being there for him from the beginning and helping him through tough times. “That’s the only reason I weathered the storm,” he said.

Wilkins said that even when he was playing with other teams, he always felt he was an Atlanta Hawk. “There’s a reason I stayed here as long as I did,” he said, and that he is glad he did because now there is a new direction under the leadership of Steve Koonin.

“This statue means so much. It represents change now in this organization,” Wilkins said. “We can say we had history here.”

So what would happen to the Wilkins statue? And who actually owns it.

When asked, Rutherford Seydel, who is an attorney and a minority owner of the team, explained it this way.

“The Hawks own the statue,” said Seydel, who was involved in the legal agreement. “But we thought ahead, and we took safeguards to assure the statue would remain in Atlanta.”