With the holidays upon us and the studios releasing their awards-bait biggies, I figured a round-up of sorts might be more useful than a single review.  The trio below is available for viewing in select theaters or on VOD.

Hers was the face that launched 1,000 magazine covers and she died too young, chased by paparazzi down a tunnel in Paris, like a fox pursued by a pack of hounds. 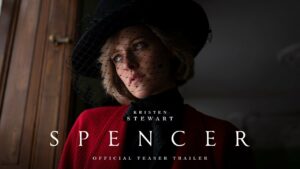 However, you feel about her – poignant People’s Princess or preening press manipulator – you’ll likely be disappointed by this confused bio-film set during a particularly dismal Christmas in 1991.

Charles is cold, Camilla lurks in the background, and Diana’s most convincing relationship is with her toilet bowl (bulimia, remember?).

Kristen Stewart, an actor I genuinely admire, struggles mightily with the role, and ends up somewhere in between an interesting impersonation and a 5th-grader’s notion of a madwoman.

If you’re determined to spend the holiday with the Royals, a far better choice would be “The Lion in Winter,” starring Peter O’Toole as Henry II and Katharine Hepburn as Eleanor of Aquitaine.

Not some lionhearted crusader nor a hunchbacked schemer, but Richard Williams, the father, coach and, let’s face it, creator of two of the greatest tennis players ever born, i.e., Venus and Serena. 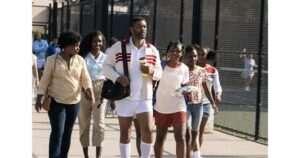 Will Smith reclaims his position as one of our most charismatic actors with a showy and shrewdly conceived performance in the title role. Granted, it’s a bit irritating to see Venus and Serena reduced to supporting roles (seen as little girls and young teens, they are mostly hard-working, ever-smiling cyphers).

But the movie is what its title says it is – a portrait of an ambitious man who bucked stereotypes and prejudices from every side (the ghetto dudes are as threatening in their way as the country-club blondes) so that his daughters could become the best in the world without losing themselves to pressure, prejudice, and, of course, immense fame.

The film could’ve been structured better and it’s apparently a bit of a whitewash (sorry, bad choice of words), but its aim is true. And so is its heart.

Two sets of parents confront each other in one of those sadly sterile church rooms to talk out, as the press notes say, “an unspeakable tragedy.” 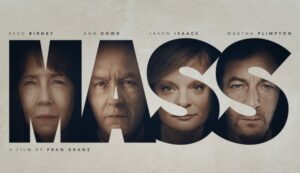 The film is relentlessly coy about the nature of said tragedy until we swing into the final half hour wherein each of the four gets a major Tony-bait monologue. Except, to my considerable surprise, this seemingly stage-bound actors’ showcase didn’t originate as a play.

However, it was written and directed by an actor (Fran Kranz) and it shows. Mightily. It’s not that the dialogue is uninteresting or the actors inept, but that’s all we get – loads of words and emotion.

Kudos to Ann Dowd, Martha Plimpton, Reed Birney and Jason Isaacs, but this is not the stuff that movie careers – or memorable movies – are made of.