The Atlanta Business League made “pushing the problems of the pandemic forward” their theme for the event.

During the Atlanta Business League’s 43rd CEO Awards Luncheon, Georgia Power Chairman, President and CEO Chris Womack along with others were recognized for their leadership in corporate America, entrepreneurship, and politics.

Womack serves over 2.6 million customers in the state and is in charge of the largest subsidiary of Southern Company. They are one of the nation’s largest energy providers. 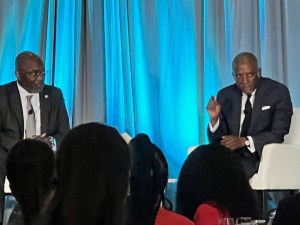 The award, named after the CEO of H.J. Russell and Company, was given to Womack for his commitment and fairness to people — while maximizing shareholder profits. 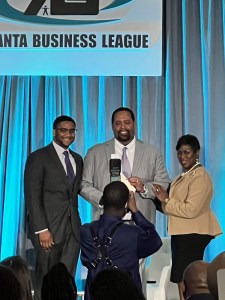 “I realized that I’m blessed to have been in a room full of entrepreneurs like myself who are trying to build a business and fulfill their dreams,” Ewing said.

The first Black business organization in the Southeast, the ABL was founded by Booker T. Washington in 1933 to enhance and expand the business community in Georgia.

“Whether it’s ABL or other Black organizations’ focus on growth and development, partnering with somebody; a firm or a startup company to get themselves started finding a way to help out,” Womack said.

“If you have a good business plan, and you’re about your business, you’ll find people who will invest in those things — not hobbies, not dreams — but real business opportunities,” Ewing said.