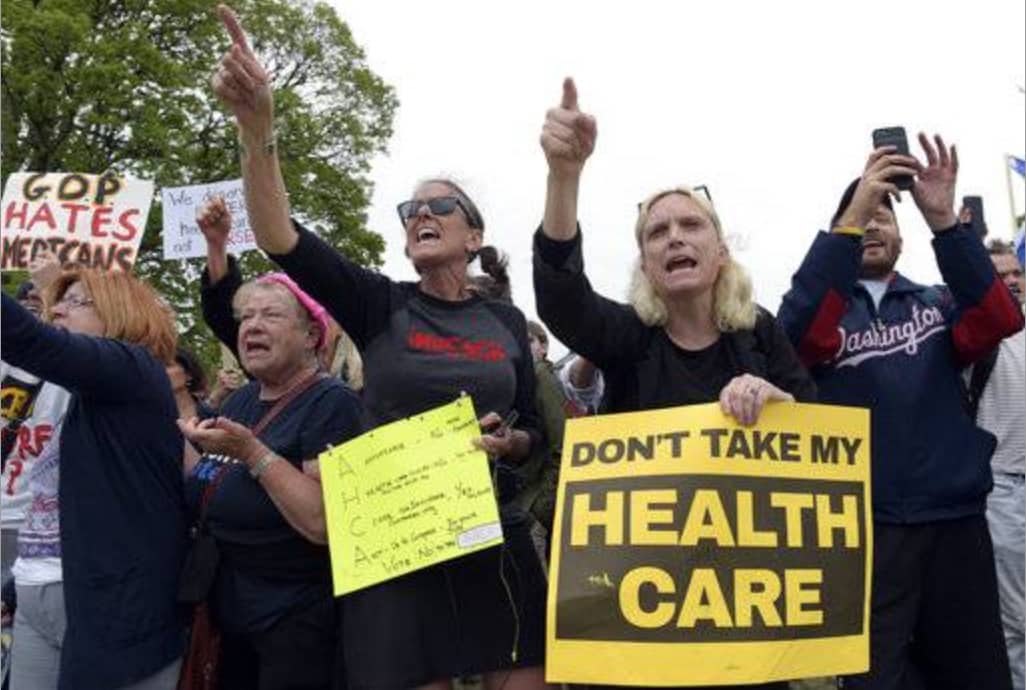 While more recent headlines have pushed aside coverage of public reaction to the House GOP passed “repeal and replace” of the Affordable Care Act, passed during the administration of then-President Obama, there remains deep anger about the draconian nature of the legislation which may well turn the tide in two upcoming Georgia elections.

As societal caregivers, women lead the charge in opposition to the Paul Ryan-backed American Health Care Act, which passed the House by a four-vote margin earlier this month. Republican senators say the bill is so bad they will start from scratch rather than “fix” the House version. However, when senators announced a 13-member pale male committee to craft their bill, they added yet another reason for women to oppose the Republican repeal and replace initiative.

Those who oppose the AHCA found further reinforcement for their position when GOP Idaho Congressman Raul Labrador asserted, “nobody dies because they don’t have access to healthcare.”

Estimates predict 24 million Americans would lose health care coverage under the House bill, which is opposed by the AARP, the American Medical Association, the Diabetes Association, and a host of other medical advocacy groups. The bill has an impact on funding for special needs education, mental health care services and a host of inherited medical conditions which make the “pre-existing” condition list – diabetes for example.

Among the most draconian and “anti-woman” provisions of the House bill are those which not only de-fund Planned Parenthood and other abortion providers, but also allow pregnancy, sexual assault, domestic violence, postpartum depression and Caesarean sections to be deemed pre-existing conditions, leading to loss of medical coverage.

These provisions directly affect millions of women since 32 percent of mothers have had a C-section, one in six women is a victim of sexual assault and 30 percent of women have experienced some form of domestic violence.

Erectile dysfunction? Still covered under the House bill. Was there any doubt? 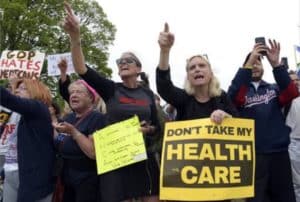 Opponents of the AHCA protested at the Capitol May 4 following the House’s vote to pass the act. Credit: AP via lasvegassun.com

In whatever form, the new health care legislation finally emerges, states will likely have a greater role in defining how medical care is provided in the future. Georgia is one of only a handful of states that never expanded Medicare as allowed during the Obama administration. With the closing of several rural hospitals as a result, the state has paid dearly for those decisions by Gov. Nathan Deal and the GOP leadership team in the Georgia House and Senate.

Thus, healthcare is a primary issue in both an upcoming state Senate runoff and the Sixth Congressional District June 20 runoff.

Kirkpatrick is a retired hand surgeon who practiced with Tom Price, a former congressman and now secretary of the Department of Health and Human Services. Kirkpatrick strictly tows the Republican line on health care issues and has run a well financed campaign with slick mail pieces.

By contrast, Triebsch, a family practice attorney married to middle school history teacher, supports the expansion of Medicare and advocates preservation of the Obama-era legislation. Triebsch has run a grassroots campaign where hundreds of women have knocked on doors and worked entice Democratic voters to vote early or on May 16. She has raised money since winning a runoff spot, but has been outspent by a factor of more than 15-to-1 so far. 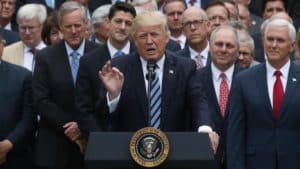 Women have been largely shut out of the debate over the Republican effort to replace the Affordable Care Act with a measure that would enable health insurers to deny coverage for pre-existing conditions such as sexual assault, domestic violence, and Caesarean section. Credit: Getty Images via metro.us

Senate District 32 has been represented by a Republican for three decades and tends to vote overwhelmingly for Republican candidates. Tuesday’s vote will demonstrate whether the highly motivated volunteers, primarily women, knocking on doors to “Turn 32 Blue” will succeed. May 16 becomes a test of whether anger over Republican healthcare (and other) policies channels into sufficient enthusiasm for a Democratic woman candidate’s victory in a ruby red district. The stakes are high on the Republican side as well since a Democratic victory would remove the GOP Senate supermajority now in place.

The next Georgia test of precisely how disaffected the electorate is comes on June 20 in the runoff election for the Sixth Congressional seat Tom Price vacated for the HHS appointment.

In that race, the Republican Karen Handel could not be more clearly aligned with President Donald Trump and Paul Ryan since both will have headlined fundraisers for her by election day.

By contrast, political newcomer Jon Ossoff has been clear in his opposition to the House-passed bill which he says allows discrimination against Georgian’s with pre-existing conditions and would make health insurance unaffordable for many.

Special elections are quirky and special election runoffs even more so. It boils down to which voters bother to cast a ballot in an election with only one race on the line. Simmering anger over threats to health care coverage could well be the tipping point on May 16 and June 20.

Will Republicans maintain the status quo in SD 32 and the Sixth Congressional District or will Democrats see the beginning of a “Turn it Blue” strategy to “Grab ‘em by the Midterms” in 2018?

Melita Easters is a playwright and former journalist who is founding chair and executive director of Georgia’s WIN List, a political action committee, which seeks to elect more women to legislative and statewide office in Georgia. Website: www.gawinlist.com