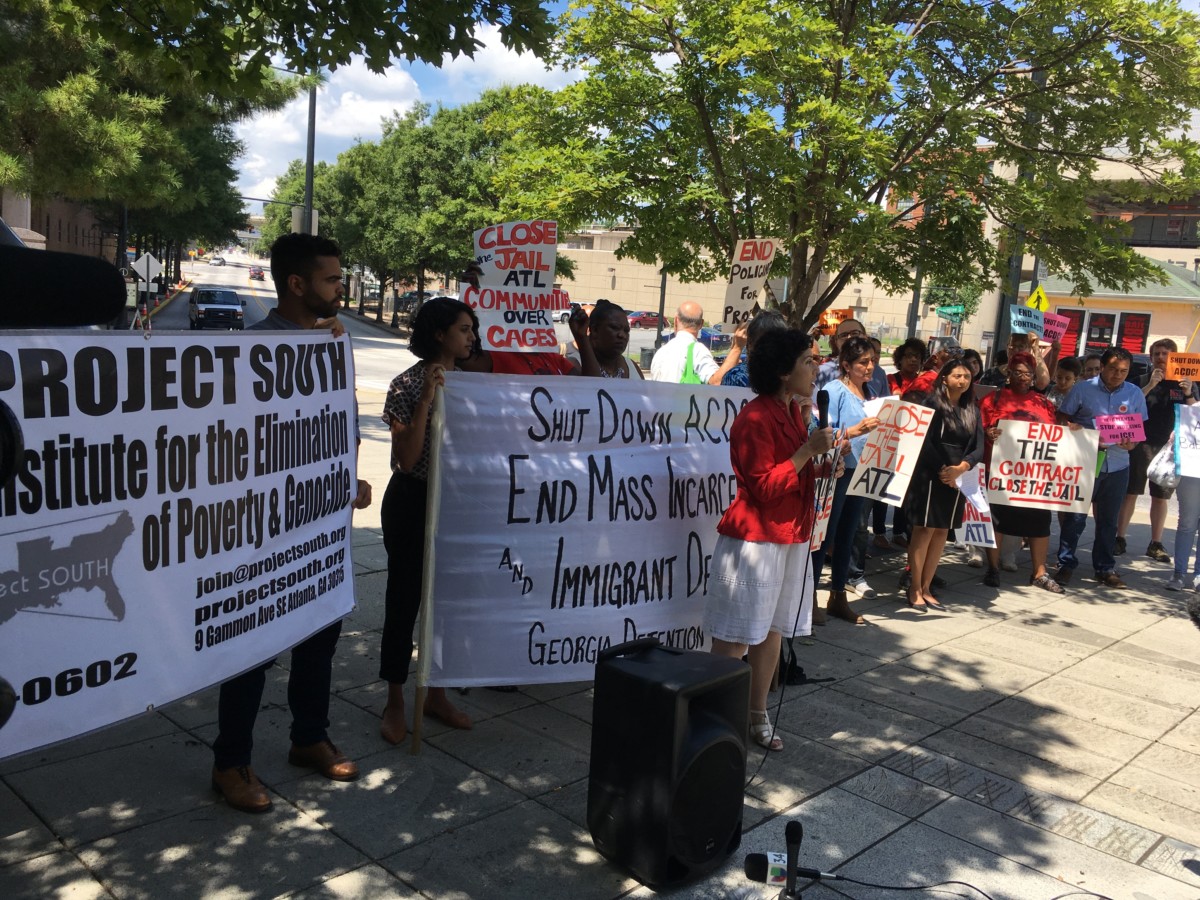 Azadeh Shahshahani, legal and advocacy director with Project South, said on Monday that a new report from her organization and others documents violations of detention standards for ICE detainees at Atlanta's jail.

Atlanta Mayor Keisha Lance Bottoms has hit “pause” on a contract that sees the city jail hold ICE detainees. Activists say one reason she should end it permanently is poor conditions at the jail. The city’s corrections leader says his facility is up to the best standards. 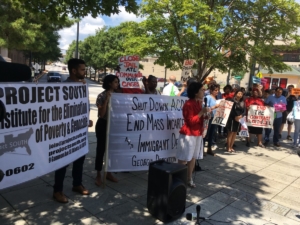 Azadeh Shahshahani, legal and advocacy director with Project South, said on Monday that a new report from her organization and others documents violations of detention standards for ICE detainees at Atlanta’s jail.

The point of the gathering was a press conference to release a report by Project South and Georgia Detention Watch. Both organizations very much want to see Atlanta permanently end its contract to hold ICE detainees.

According to their report, interviews with some 38 detained and previously detained people plus questionnaires from 11 immigration attorneys gathered over roughly 18 months show evidence of  violations of international human rights and detention standards. The charges include cases of things like inadequate or nonexistent access to health care, bad food, or “arbitrary or punitive” segregation.

But Chief Patrick Labat of the Atlanta Department of Corrections said the Atlanta City Detention Center is compliant with both mandatory and optional national standards as defined by the American Correctional Association, a trade group.

“While we take all allegations of this nature seriously, we stand by the ratings we repeatedly earn on national detention standards as well as our commitment to the humane care and custody of our clients in a safe, secure and sanitary environment,” Labat said in a statement.

When Johnitha McNair visited Atlanta City Detention Center in 2015, the auditor wrote that the place met or exceeded the 42 applicable standards that she came to check. She’s a PREA auditor certified through the U.S. Department of Justice. PREA stands for “Prison Rape Elimination Act.” Many of those 42 points are specific to preventing sexual harassment or violence, like making sure there are policies that ensure that allegations of sexual violence get an investigation.

But some of the points are broad even as they’re part of PREA, like checking the jail’s surveillance system.

McNair just finished another site visit this month and is finishing the written report.

“Not just as a PREA auditor, but as an ACA [American Correctional Association] auditor of both adult and juvenile detention facilities around the country, hands down the Atlanta City Detention Center sets the bar for service provision, care and concern for inmates and having a standard of dignity and respect for their clients like few other facilities I have audited,” said McNair, in a written statement last week.

She said inmates affirmed to her an “environment of respect,” and she saw individualized care for inmates, including those who have disabilities, young offenders, LGBTQI or gender non-conforming folks, mature inmates and ICE detainees.

Priyanka Bhatt, attorney and Legal Fellow with Project South was lead author of the report, and stood in a patch of shade in front of the jail at last week’s press conference. A few officers stood on at the entry of the jail maybe 20 yards off. Bhatt made several specific allegations and drew a conclusion.

“Atlanta cannot call itself a welcoming when it is profiting off immigrant pain and suffering,” she said.

Atlanta collects $78 per ICE detainee per day, under a contract that dates back to 2010.

Besides pausing new ICE intakes, Bottoms also named an advisory council on immigrant detention, whose job is to give her thoughts on what to do permanently on the question of renting space to the feds for ICE detention. Its members include a roster who seem likely to advise closure. It includes immigrant rights activists and legal experts. Shahshahani herself is a member of it and said that a majority of members have recommended the mayor stop the detention of immigrants for ICE.

The mayor’s office reports having no documented recommendations from the council at this time.

“The administration remains committed to enacting policy at the local level to ensure Atlanta keeps families together and champions the dignity and human rights of all — regardless of nationality or residential status,” said a mayoral spokesperson via email.