Pullman Yards, a former railroad facility in Atlanta, is among the adaptive reuse projects worked on by Rainey Shane and the JLL adaptive reuse team. (Photo by John Ruch)

Adaptive reuse — the repurposing of older buildings for modern uses — is doing some successful adapting itself as the pandemic shakes up real estate. The urban trend is spreading into suburbs, remaking troubled malls and hotels, and the surge in industrial uses like delivery-oriented ghost kitchens.

“The pandemic is creating this forced adaptive reuse,” says Rainey Shane, an Atlanta-based vice president of the international real estate firm JLL who founded its Adaptive Reuse Unit. “It’s good for the planet. It’s good for the developer’s pocketbook. It’s good for the economy, because… historic preservation groups have said that mix of old and new buildings has the greatest chance of economic success.” 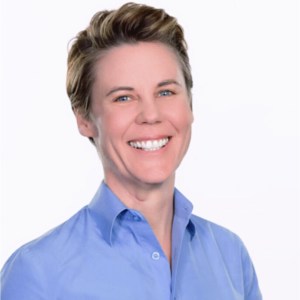 It’s likely to be at least a year before market trends again tempt developers to the old teardown mindset, Shane added. “Adaptive reuse right now is booming. And 2022 is looking really great,” she said.

Adaptive reuse has been around for several development waves in Atlanta, back to the 1990s conversions of factories like Cabbagetown’s cotton mill into loft apartments and condos. Today’s influential example is Ponce City Market, the mixed-use remake of a don’t-build-’em-like-they-used-to Sears store and warehouse in the Old Fourth Ward that opened in 2014. Shane worked for years on Ponce City Market as part of the team at the development firm Jamestown, where she also aided similar projects including the Westside Provisions District.

She moved to JLL about five years ago and suggested starting an adaptive use division. Since then, she’s worked on the likes of Pullman Yards — now known as the Pratt Pullman District — the former railroad car facility in Kirkwood that is turning into a 27-acre multiuse complex anchored by a film studio. She says JLL recently secured a tenant for three buildings there, who has yet to be publicly named.

Shane says “those types of really large, grand projects” got investor money flowing to adaptive reuse. “But recently, I think what we’re seeing is, with the pandemic there are so many factors that are making people turn to adaptive reuse if they hadn’t in the past. One is the way we’re using space in the built environment has completely changed because of the pandemic.”

The pandemic has accelerated some changes, like the shift away from brick-and-mortar retail and toward working from home, while creating others, like crushing the hospitality industry. That has made for a lot of “distressed” older properties on the market and uncertainty for landlords who might traditionally consider building new.

Shane says “developers right now are not as willing to take that risk to put in a massive [new] tower… because there is such instability in the tenant market. They don’t know if they’re going to be able to lease it.”

While adaptive reuse requires some expertise, it can be less expensive than new construction, lowering that risk, Shane says. And that can help struggling properties reconfigure for some of those new business and tenant trends. “There’s a pent-up supply of investment money out there,” she says, and some cities now provide various zoning incentives for adaptive reuse.

Greener construction amid climate change is another major trend that can make adaptive reuse attractive. “It takes a lot less carbon to repurpose an existing building than to tear it down and build from scratch,” Shane said. “It’s night and day. There’s no comparison.” 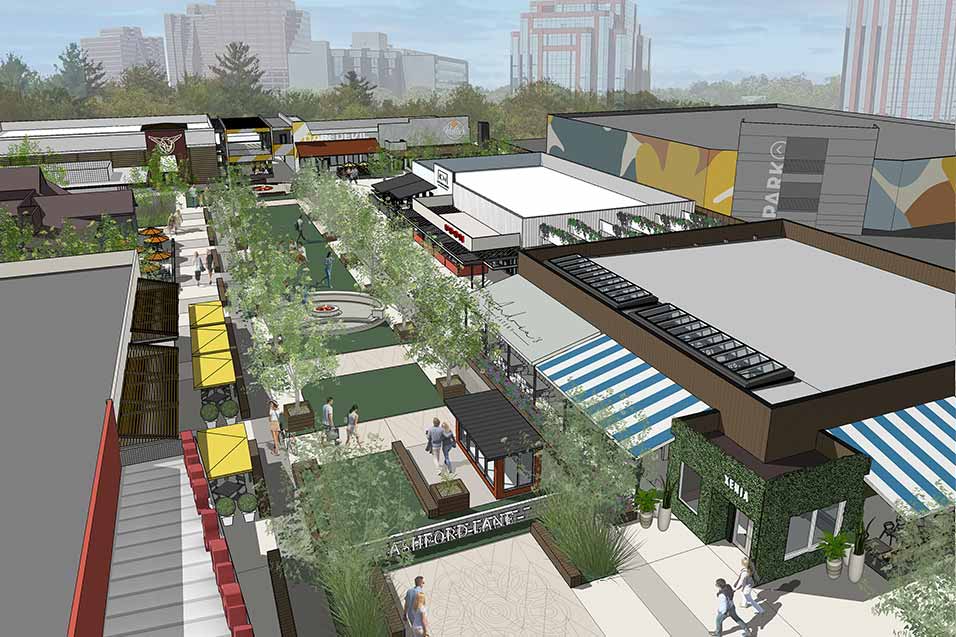 A conceptual illustration of Ashford Lane, an adaptive reuse remake of a Dunwoody shopping center. (Image by JLL.)

For JLL these trends are coming together in such places as suburban Dunwoody, where the firm is a year into recreating a shopping center near Perimeter Mall. Previously known as Perimeter Place, the car-centric strip mall is becoming Ashford Lane, a pedestrian-oriented complex with a large lawn and where an old furniture store will be reborn as a food hall sometime in the spring. “We’re taking out the parking, putting in all green space, outdoor amenities, outdoor seating, and surrounding it with buildings that are all restaurants,” Shane said.

Another big pandemic conversion trend is struggling hotels becoming apartment complexes. Shane noted another developer is moving forward on one such project, dubbed the Spoke, in the Gwinnett suburb of Peachtree Corners, generating some resistance from existing residents.

Much of the story of adaptive reuse in post-industrial cities like Atlanta has been repurposing hulking relics of the manufacturing past like warehouses and railyards. The pandemic is changing that, too, as online ordering and home delivery have made the old demand for warehouse space new again.

“I’ve turned a lot of warehouses into mixed-use,” said Shane. “I had one in March of 2020 that had permits and was ready to start construction on a mixed-use development… and when the pandemic hit, they pulled the plug and they started looking at, ‘How can we turn this to last-mile distribution?’”

Former big-box stores are becoming hot for such distribution hubs or other industrial-type uses, a sector that Shane says is booming. Ghost kitchens are another popular new use fueled by the pandemic. And longer-term, Shane says, alternative energy technology firms are a possible growth area. A current example from another developer is the solar panel company SolAmerica Energy operating from Buckhead’s Indie Studios, a former railroad warehouse turned into a creative company center.

Assuming COVID backs down and the market enters a post-apocalypse phase, Shane says 2023 could see some developers starting to undo their own adaptive reuses for ye olde demolish-and-build. “It will happen again once things start to completely rebound… There are developers who are going to tear stuff down and do something bigger,” she said.

Repurposing a building can simply be more fun than bulldozing it as well due to the discoveries and challenges. “I’ll tell you what, if someone would do a reality show on an adaptive reuse project, it would be the highest-rated show on TV,” she said. “Developments, in general, are crazy because of all that goes on, but adaptive reuse especially because of all the crazy stuff you find.”

At Pullman Yards, her team had such unique challenges as refurbishing equipment used to move train cars. “At Westside Provisions, we found a secret room where they slaughtered pigs… The more you do these things, the more you encountered these oddities,” Shane said. “We haven’t found Jimmy Hoffa yet.”

Ponce City Market was a cornucopia of artifacts from the Sears days, and now “there’s a lot of them hanging on the wall in my house,” Shane says. A trove of the building’s original blueprints – on actual blue paper – were in the basement, and two century-old dresses and their receipt were found in a wall.

“We found a lot of glass whiskey bottles in the walls at Ponce. So they had a good time when they were building it,” Shane says, adding future explorers may find her own, more sober contribution — her business cards.

That history has a serious side as another major argument for adaptive reuse. Historic preservation is a motivator for Shane and JLL. Her team visited a recent Atlanta Preservation Center exhibit about adaptive reuse concepts for part of Whitehall Street in Castleberry Hill and Mechanicsville that conveyed how preservation could mean redevelopment without total gentrification or the loss of human-scaled buildings.

“I think that place-making is incredibly important to Atlanta and some of the Southeastern towns that I’ve been working in, and I don’t think developers give it enough emphasis,” said Shane. “Because honoring the history of a place — especially Atlanta, we’ve got a rich history — is important to people. And it shows when you’ve got a place like Ponce City Market that is so incredibly popular and it’s because the developer reused it in a way that honors its history.”