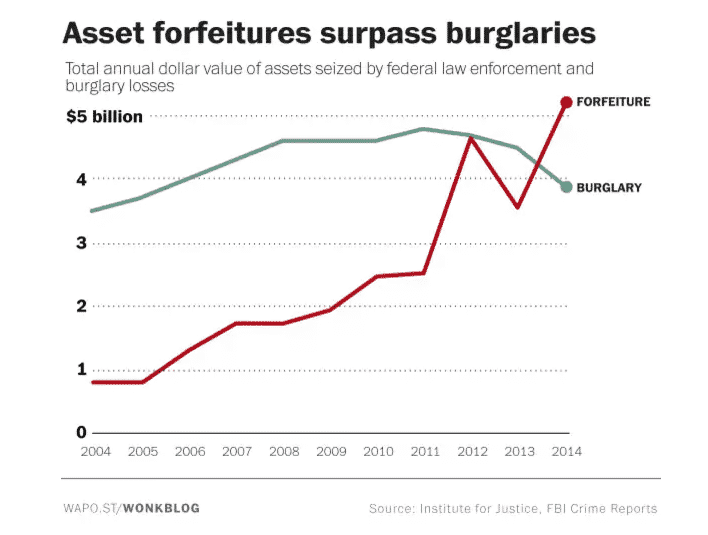 At a law enforcement round table meeting with President Trump back in February, a Texas sheriff mentioned that a legislator had introduced a bill requiring a conviction before police could seize someone’s property.

“Who is the state senator? Want to give his name? We’ll destroy his career,” Trump said, to a round of laughter from the sheriffs.

It turned out that this was not even the most outrageous thing Trump said that afternoon, and by the end of the week it was long forgotten in the swirl of presidential riffs. Despite vocal opposition from both the right and the left, support for the expanded use of civil asset forfeiture remains one of the few sinews connecting the president and his recused but unretired attorney general, Jeff Sessions.

To be clear about terms, a criminal asset forfeiture is when someone is convicted of a crime and their assets are seized. These amount to only 13 percent of federal Justice Department forfeitures. The remainder are civil asset forfeitures, in which assets can be seized on suspicion of criminal activity, even when those whose property is being seized have not been accused of a crime. Getting property returned can be a lengthy bureaucratic nightmare, with little public access to information.

Last month, Sessions announced the Justice Department was resuming its “adoptive forfeiture” program, which gives local police departments an incentive to seize assets that might be involved in the commission of a federal, as opposed to state or local, crime. Former Attorney General Eric Holder had ended the program in 2015. The attorney general’s policy changes also amounted to an end-around those states which have passed legislation setting limits on asset forfeitures.

“With care and professionalism, we plan to develop policies to increase forfeitures. No criminal should be allowed to keep the proceeds of their crime,” Sessions said in a speech to the National Attorney Generals Association. “Adoptive forfeitures are appropriate as is sharing with our partners.”

“Equitable sharing” is another Orwellian phrase that’s used, referring to a 1984 law which set down the ground rules for how local and state police divide the assets they seize with the feds, after they’ve made one of those “adoptive” forfeitures.

The term “animal spirits” comes from economics, not law enforcement, but it vividly describes what has happened in the decades since that 1984 law — actually an amendment to the Comprehensive Drug Abuse Prevention and Control Act — gave tax-starved police departments across the country a green light to seize property.

Assets seized by federal law enforcement now exceed the total value of property lost by Americans in burglaries, according to a report by the Institute for Justice, a libertarian nonprofit law firm.

It has been pointed out that the federal totals have been inflated by big, and justifiable, seizures like that in the Bernie Madoff case. On the other hand these figures don’t include seizures in which the feds aren’t involved, for which there are no comprehensive national totals reported. What we know suggests this is also a huge amount of money. We do know the annual increase in forfeitures has really accelerated in the years since the 2008 recession.

That’s a key to this issue. Asset forfeiture, touted as a way to strike at criminals and gangs, has become deeply engrained in the way law enforcement pays for itself. There are enough rogue departments where seizures have gotten totally out of hand to win a few dozen state journalism contests. But this is only the wretched excess.

A training session for prosecuting attorneys in Arizona, quoted in the Institute for Justice report, advised not to “just start grabbing everything in sight” because it could “ruin forfeitures for all of us.”

“Like pennies from heaven,” is the way Columbia, Mo., Police Chief Kenneth Burton put it.

“We just usually base it on something that would be nice to have that we can’t get in the budget, for instance. We try not to use it for things that we need to depend on because we need to have those purchased,” he said. Purchased by taxpayers, that is.

According to a Cato Institute poll, 84 percent of Americans oppose civil asset forfeiture, but a crucial constituency in support of it are those law enforcement officials who have grown dependent on the practice. It’s a constituency both the president and the attorney general are intent on having on their side.

The day Sessions announced his increased support for forfeitures, Trump had the interview with New York Times reporters in which he openly lambasted his attorney general. Once again, the asset forfeiture issue was pushed down in the news feeds. But this is an issue with a long fuse, and it could blow at any time.