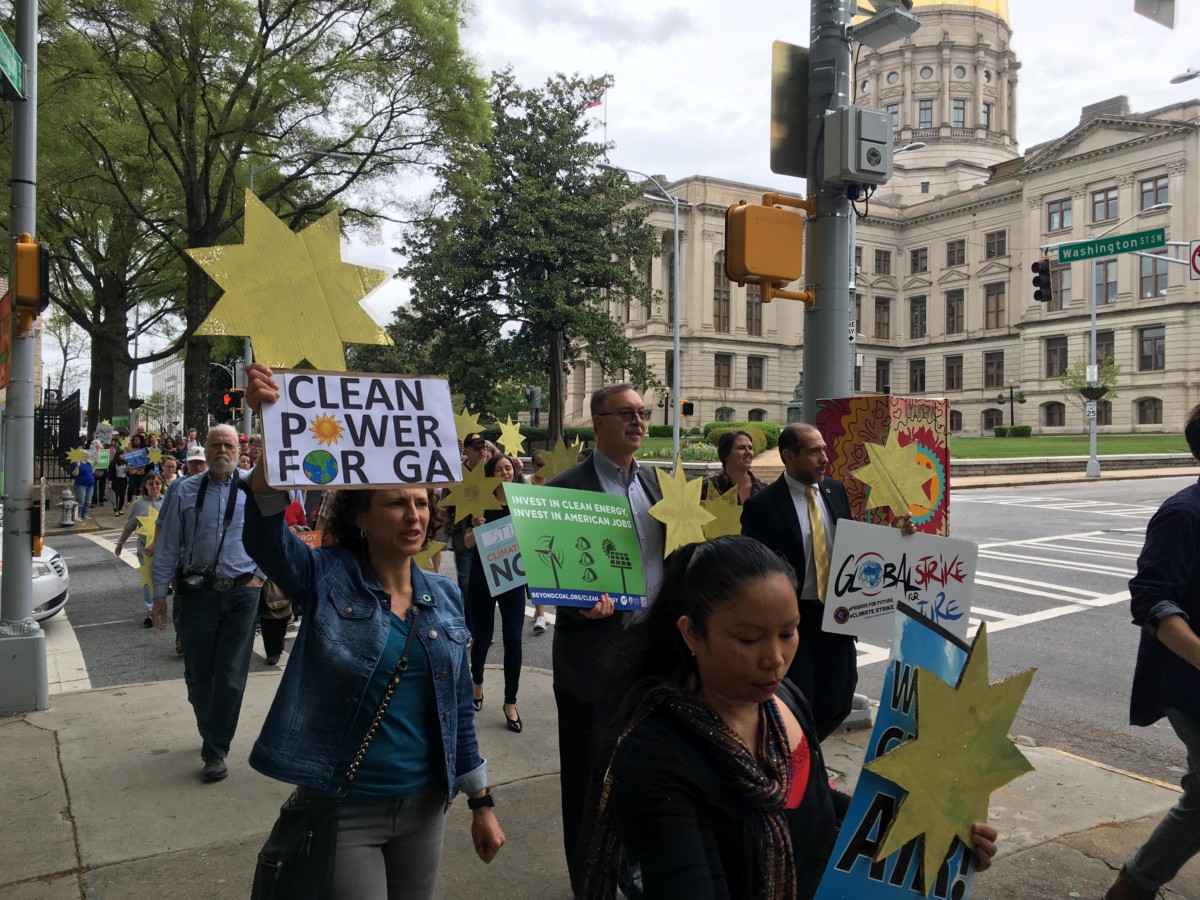 Utilities like Georgia Power aren’t normal companies: the government won’t let them go bust, peoples’ lights and heat have to work without costing too much, investors are guaranteed a profit, and yet the business also pollutes the earth and harms human health.

And right now, it’s the time for a periodic process when Georgia regulators and the public can try and change how some of these interests are balanced. 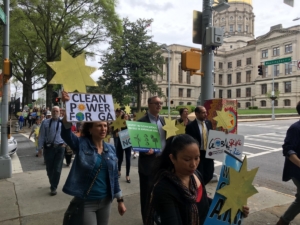 “This is our best opportunity in Georgia to win clean, affordable energy, to push for energy efficiency in Georgia … What we don’t get done this year we have to wait three more years to get back to this conversation,” said Neil Sardana, Georgia organizer of the Sierra Club’s Beyond Coal Campaign, speaking to a crowd of faithful in a downtown church basement on April 8.

Even if your power bill isn’t from Georgia Power, some of your electricity may be, because it sells power to other utilities.

Georgia Power proposes edging further away from coal, something it announced a few months ago via IRP documents. It wants to close Plant Hammond, a coal-powered plant near Rome and to shut down one coal-burning unit at plant McIntosh near Savannah.

It also proposes getting another additional 1,000 MW of power from renewable resources — which is about the capacity of the coal it wants to shut down.

On the efficiency front, the utility’s “demand management” plan proposes a pilot program for up to 200 low-income households to put in energy-saving upgrades, then pay for those things over time, as well as a program to crowdfund such upgrades and other ways to cut power demand.

And just a few hours after hearings began on these plans, those few dozen environmental and consumer advocates left the and church basement marched over to the PSC, chanting outside, demanding clean, affordable energy.

The people leading that rally want more money for helping low-income people patch up drafty homes, more good jobs working on plants that don’t harm peoples’ bodies, a higher rate for small-timers who sell solar energy to the grid, and guarantees that the ashy leftovers from burning coal will be stored up tightly.

Erica Vincent, the Just Energy Portfolio Manager for the Partnership for Southern Equity, called for more weatherization and efficiency money.

Put it this way: some people have money for the upfront costs of new water heaters, pricey efficient lightbulbs or smart thermostats. Those people have low power bills.

Then there are homeowners who can’t pay for upgrades, or landlords who won’t. The resident ends up paying a good bit to stay warm in a drafty place.

Vincent said Georgia has to be accountable about how it distributes the benefits and the burdens of energy production.

Jennette Gayer called for all of the ashy residue from Georgia’s coal-burning power plants to be kept dry and sealed away from the public. Right now some ash is kept in watery ponds, though those are set to be drained or drained and emptied.

“It shouldn’t be sludge that can leak,” said Gayer, director of Environment Georgia.

She said it should be “in a lined landfill, so you have to put something between the toxins and the water; capped so you can’t have this stuff blowing all over the place; and away from our waterways.”

North Carolina state regulators have ordered Duke Energy to dig up its coal ash and put it in lined, capped landfills. That came about five years after an ash pond there collapsed, spewing its contents into a river.

Going forward, Georgia Power will continue to sell some of the ash into the building industry, and bury the rest in dry landfills, pending sale. But it’s got a backlog of such material in 29 ponds across the state. In the utility’s plan to close some ponds and consolidate the ash into others that are drained, not all the ash would end up in landfills that are lined.

Both ash ponds and low-income households came up several times at the hearings — which involve advocacy groups being able to ask questions of the utility. The commissioners tend to keep fairly quiet like judges, though they do ask some questions and occasionally make statements. 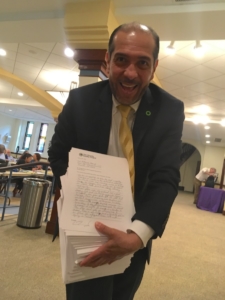 Jairo Garcia, Atlanta co-chair of The Climate Reality Project and something like 1,400 petitions for clean, affordable energy. Credit: Maggie Lee

“It’s enormously expensive and our ratepayers [household customers] are on on the hook for this,” Echols said.

Echols also said he thought a plan to crowdfund efficiency upgrades for low-income folks doesn’t quite sound ready for prime time. He said he’d feel better about it if Georgia Power said they were going to reach out to their best Fortune 500 customers and ask for their engagement.

Back out on the sidewalk on Monday, Jairo Garcia had a luggage dolly — toting a stack of petitions more than a foot tall for delivery to the PSC, each a handwritten letter asking for cleaner, cheaper energy.

He’s Atlanta chapter co-chair of The Climate Reality Project, a national group that works to cut greenhouse gases, and speed a shift toward renewables. The group had a leadership training in Atlanta last month, and he solicited petitions there.

“This is about our planet, our kids, our future, it’s time to act,” Garcia said.

The PSC isn’t acting right this minute — another round of hearings begin May 13, and the last in June.

And there may be major changes between now and the PSC’s summer vote. In 2016, at the last IRP, the PSC ended up requiring Georgia Power to add three times as much renewable energy to its portfolio as the utility had proposed.