For African-American women, a hairstyle can be a tricky decision

For African-American women, unemployment is 12.3 percent nationally, 13.1 percent in Georgia. That tough reality helped draw more than 100 black women to an event last week at Georgia State University focused on one decision that each of them faces:

What to do with my hair? 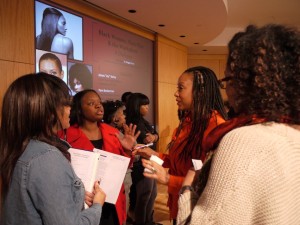 Natasha Daniels, second from right, with Georgia State University students at a recent event about African-American women and the way they wear their hair at work. Daniels is a legislative analyst for the city of Atlanta who advised them that natural hair can be part of a polished appearance. (Credit GSU)

For them, preparing for a job interview or the first day of work isn’t as simple as deciding whether to go with the regimental blue-striped or the red power tie. Around the country, disputes over African-American female hairstyles have led to accusations of wrongful firings and discrimination lawsuits.

In this difficult economy (overall unemployment is 7.9 percent, Georgia 8.6 percent according to the Bureau of Labor Statistics), the crowd at “Black Women, Their Hair & The Work Place – A Dialogue” came seeking strategic advice from panelists on whether and how to transform their hair.

Nakisha McNeal, who wears long dreadlocks and is a student at the GSU Robinson College of Business, was eager to know how her appearance might be greeted by potential employers when she starts interviewing for jobs. The panelists had been invited by the career services staff of the Andrew Young School of Policy Studies, who regularly handle that question from African-American female students about to enter the job market.

“Your look most definitely fits you, but does it fit the place where you are going?” said Donnita Raglin,  director of leadership and professional development at Clark Atlanta University.

“You can pull your hair back in a nice bun and it’ll be accepted and it can looked polished,” added Natasha Daniels, a legislative analyst for the City of Atlanta, said to McNeal. “You tie it down at night and make sure nothing’s sticking up. You can do the look, especially here in Atlanta.” 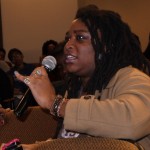 Nakisha McNeal challenged the panel about the assumption that hair must look a certain way to be presentable, especially in the workplace. (Credit: GSU)

Panelist James “Jay” Bailey, chief executive officer of Operation HOPE, a non-profit organization, put it bluntly: “You have to play by the system.”

But is that status quo fair? McNeal pushed back.

“You’re talking about being polished and (having) interview skills and yet no one is addressing the fact that natural black hair has been traditionally seen as not polished on its own whether it’s well cared for or not,” she told them.

“So basically it’s all about maintaining the Eurocentric standpoint.”

That opinion echoed one premise of comedian Chris Rock’s 2009 documentary, “Good Hair,” which focuses on the stereotypes (as well as expense and chemical exposure) black women face in deciding how to style their hair. The most common assumption is  that women who process their hair to make it straighter are prettier, while those who have untreated, natural hair look frumpy, unkempt and unprofessional. 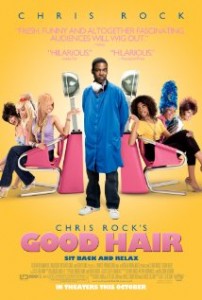 Comedian Chris Rock made a documentary about black women’s hair after his daughter told him she wanted “good hair.”

“I’m not saying natural is not good. I’m not saying natural is not acceptable … I’m saying that you have to keep the natural look just like you would keep the straight hair look,” said Raglin. “It still has to be neat. It still needs to be part of the image that you’re presenting on behalf of yourself and the organization you’re going to represent.”

The panel also included Pam Beckerman, vice president of human relations at the Metro Atlanta Chamber of Commerce. These experts emphasized that new employees on the ground floor of an established company don’t set the rules.

“I can’t go work for Coca-Cola and change their system,” said Bailey. “Mark Zuckerberg, he dresses however he wants to dress, he’ll go on CNN with a hoodie and some Converse, but he’s worth $47 billion and he does something nobody else on the planet can do.

“But if I want to wear my hair natural and all over the place and think you just need to accept me because it’s black hair and I have that right well you also have the right not to hire me,” Bailey said.

The hair decision is rooted in values and identity, Daniels said.

Daniels said that when she was in early 20s she didn’t want to compromise her natural hair. She went into higher education and public relations, fields she believed it would be acceptable.

“I did have the freedom,” Daniels said. “I was also never viewed as seriously as I would liked to have been viewed.”

Inequality has been at the heart of wrongful firings and discrimination lawsuits over African-American female hairstyles.

Rhonda A. Lee, a former meteorologist at KTBS-TV in Shreveport, La. has accused her former employer of firing for taking viewers to task for criticizing her short hairstyle in racially-insensitive messages on Facebook. The station has claimed she was fired for violating its social media policy.

A string of lawsuits have been filed against employers since the early 1980s by African American women against former employers for allegedly discriminating against them for wearing non-conforming hairstyles. Perhaps the best known is a 1981 case involving former American Airlines ticket agent Renee Rogers who was fired for wearing cornrows on the job. The courts ultimately decided in favor of the airline, ruling that companies have the right set to set policies governing employees’ grooming.” 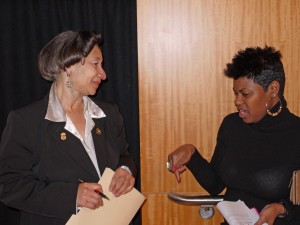 At the GSU event, there was no one clear right way to do hair. Many were mentioned: going short, braiding, twists, chemical treatments, ironing, Afro puffs or natural.

That versatility is an asset, said one female student in the crowd who makes her living helping African-American women fix their hair. In their dilemma, Kerstina Madden has found her economic niche.  From her viewpoint, the focus on the high stakes of workplace hairstyles can make women forget their power to choose.

“The one great thing about our hair is that you can do almost anything with it,” said Madden, an history major and hair stylist. “If you have to go to an interview, go your stylist, get it straightened. You have the ability to be a chameleon. You can transition from one extreme to the other.

“You can wear you hair natural one day and do something completely different the next.”

Ben Smith is a freelance writer based in Decatur. He can be reached at benzmyth@gmail.com