People with AIDS who are impacted by COVID-19 may see some financial relief now that Atlanta is to release $1.6 million in federal funds it’s held 17 months and might have to return to the government. 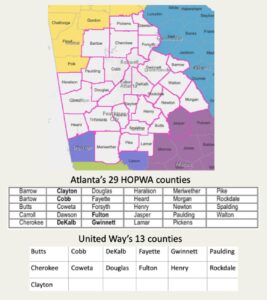 People living with HIV/AIDS in the 29 counties around Atlanta are to receive a total of $1.6 million that was allocated to Atlanta in 2020. The money is to be distributed by January 2023 by the United Way of Greater Atlanta, which typically serves 13 counties. (Composite of map by dca.gov, lists by atlantaga.gov and unitedwayatlanta.org compiled by David Pendered)

Atlanta was allocated $3.3 million on April 1, 2020 specifically to secure housing and personal support services for people living with HIV/AIDS who are affected by COVID-19. The money is part of the $2-plus trillion CARES Act signed into law on March 27, 2020.

Atlanta had neither spent nor allocated $1.6 million of its sum until Aug. 15. The current plan is to distribute all the money by Jan. 31, 2023. Atlanta has distributed $1.7 million to agencies that serve people with AIDS in metro Atlanta and Athens.

Congress delivered the money through the HOPWA program, Housing Opportunities for People with AIDS, administrated by the U.S. Department of Housing and Urban Development. HOPWA is the “only housing program solely dedicated to providing rental housing assistance for persons and their families living with HIV/AIDS, according to a HUD description.

Atlanta Mayor Keisha Lance Bottoms’ administration waited 14 months after receiving the money to seek a partner to distribute the $1.6 million, according to legislation approved last week by the Atlanta City Council.

The money evidently had languished after the city found two partners to distribute the $1.7 million.

HOPWA is the only federal program that solely provides housing rental assistance to people living with HIV/AIDS, and their families. (Image from hiv.gov)

HUD has advised the Bottoms administration to spend the $1.6 million or risk a demand for its return. The order is part of HUD’s efforts to urge state and local governments to spend the money provided by Congress to help people stay housed and secure during the coronavirus pandemic.

Atlanta subsequently declared an “emergency condition.” This condition eliminates the city’s internal requirements for competitive bids to get the lowest fee possible to distribute the $1.6 million to people living with HIV/AIDS.

On June 9, Atlanta went to three entities with which it has partnered in the past to provide such services. All three declined to collaborate with Atlanta. Atlanta then contacted the United Way of Greater Atlanta, and it agreed to distribute the $1.6 million. All the money is to be distributed by Jan. 31, 2023, according to the legislation.

Although United Way covers a 13-county area around Atlanta, it says it has capacity to distribute the HOPWA funds in the 29-county HOPWA Eligible Metropolitan Statistical Area to be served by the money allocated to Atlanta, according to the legislation. 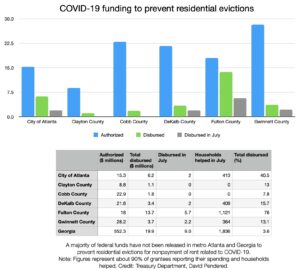 A majority of federal funds have not been released in metro Atlanta and Georgia to prevent residential eviction for non-payment of rent related to COVID-19, according to a tally of distributions reported by the Treasury Department. (File. Tally of Treasury Department figures by David Pendered

Terms of the city’s deal with United Way to distribute the money were not disclosed in the paper approved by the city council. The legislation authorized the mayor’s emergency procurement order with United Way.

The $3.3 million in HOPWA funding that Atlanta is trying to get out the door is in addition to the $15.3 million Atlanta has not been able to distribute to help the general population prevent evictions.

Of that $15.3 million, Atlanta has distributed 40 percent, according to a tally of the latest report from the Treasury Department. By comparison, Fulton County has distributed 76 percent of its $18 million allocation and was nationally recognized by HUD as a role model for creating a system to distribute money to prevent eviction.

In addition to forestalling eviction of people living with HIV/AIDSs, which until last month been halted by federal order, the HOPWA funds can pay for services to help improve quality of life for those with the HIV/AIDS and are at greater risk acquiring the coronavirus. Eligible services, according to the National Low Income Housing Coalition, include:

This money is part of a $65 million allocation in the CARES Act to secure housing and services for people with AIDS.