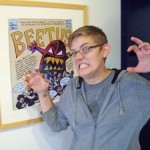 Leah Owenby creates art inspired by Type 1 diabetes. Now 34, she was diagnosed in her first year at Agnes Scott College.

After Leah Owenby was diagnosed with Type 1 diabetes she took a class on disease management at a north Georgia hospital. Her bossy, grumpy teacher painted a bleak picture of the future.

One classmate mentioned he liked to eat sausage biscuits for breakfast. “Well, you can’t do that anymore,” the teacher replied.

“What about toast with peanut butter?” Owenby said she asked.

“Well, anything can kill you,” the teacher said. “You have to keep that in mind.”

Owenby was a freshman at Agnes Scott College when she was diagnosed. Her anger over that prognosis—and other deep emotions about her disease— are transformed into whimsical, funky and jarring pieces of art in “My Creepy Diabetes Show” at Yay Studio in Avondale Estates. She assembles found objects familiar to all of us with this disease to create darkly humorous statements about dealing with the hideous monster that never leaves our bodies.

Owenby put eyes and Lego legs on her blood glucose meters, converting them into “meter monsters” and “glucobots.” She created fake photographs of herself with diabetic celebrities such as Paula Deen and Randy Jackson. She assembled an American flag out of red, white and blue testing strips. 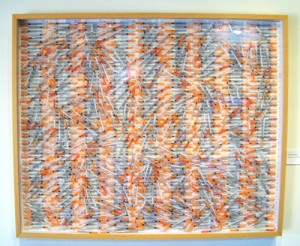 A shadowbox of syringes in “My Creepy Diabetes Show” at Yay Gallery in Avondale Estates.

Her friend and Yay Studio owner, Robert Hill, prodded her into doing the show after seeing samples of her work, including “Wow, What a Rocket!” a shadowbox display of a syringe converted into a rocket with a lancet depicted as a cowboy-like rocket rider flying through space.

“You should make your art about your diabetes. It would be a great way to process this,” Owenby recalled him saying.

Syringes were plentiful for Owenby, who as a Type 1 diabetic must give herself regular insulin shots because her pancreas does not produce that necessary hormone needed to regulate sugar in her body.

She created a comic book cover for “Beetus,” a red fanged creature that looks a little like a Pac-Man ghost, chasing after a crowd of people screaming about their diabetic symptoms.

“I’m thirsty all the time!!!” another screams.

Owenby said she named the comic character after a patron at a north Georgia pharmacy where she once worked.

“This guy came in and said, “You gotta help me, I’ve been diagnosed with the Beetus,’ she said.

At first no one knew what he was talking about, but the man persisted: ‘The Beetus. The (expletive) sugar Beetus.’” 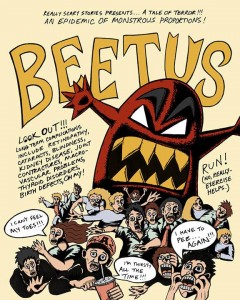 Humor and a sober future

Owenby, now 34 and working at Agnes Scott, said it took her a long time to see the humor in her condition, which I and just about every other diabetic can understand.

Beetus lives inside me too, and in hundreds of millions of others who don’t even know it. The publication date for this column, Nov. 11, marks the 14th anniversary of the day a primary care nurse stomped her foot and exclaimed an expletive at my 400-plus blood glucose reading. A reading of 80 to 120 is within normal range. That day I was diagnosed with Type 2 diabetes.

“I just remember being very angry, very, very angry. I wasn’t sad. I wasn’t scared. I wasn’t freaked out. I was just (peeved),” Owenby said of her diagnosis. I understood that feeling.

We’re different because my body can produce insulin naturally but is resistant to it, so I have to take medications to break down that resistance, sometimes with insulin supplements.

Because the sugar in our bodies is not naturally regulated, Owenby and I and millions of others with this disease fight to manage it. Stress can boost blood sugar, so I can see how making art could help her steady the anger and fear that sometimes can feel overwhelming.

There’s a lot to be scared of. Left untreated, high sugar levels in the body can wreak havoc on the internal organs, lead to blindness, nerve damage, amputations and even death. It is the seventh leading cause of death in the U.S., according to the National Diabetes Information Clearinghouse.

Little measures of the monster

As Owenby showed me around the gallery, what also impressed me was the intricate piecing together of her daily management of diabetes. Each of the test strips that she used in her flag, for instance, are little pieces that measure her life. Some are good, some are bad, but each day, the disease is taking a little out of all of us. There is a sobering enormity to her work that reminded me that she and I and all of us with diabetes most likely will die of this disease. No matter how much we exercise and try to eat right, it is always stalking us.

I could see how her art is a way to work through conflict introduced by the disease as well as the raw, often unjustified, emotions it conjures when receiving the diagnosis. I recalled my own personal sense of failure when learning I had the disease as Owenby described how she and her mother overreacted to the news. Owenby said her mother told her she shouldn’t have had so many Cokes and junk food when she was younger. She responded by blaming it on bad genes. Both would later regret the untrue statements they had made. 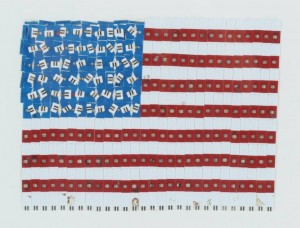 Owenby made this flag out of test strips used to measure her blood sugar levels.

Staying positive about the future can be difficult for diabetics. Owenby’s art gives her a reason to look forward. She said she plans to enter some of her pieces in juried shows and put together another exhibit, possibly with other diabetics.

Her work is relevant, especially to people whose lives have been touched by diabetes. She said she hears from people who attend the show about their family members who had succumbed to the disease. That makes her creative effort worthwhile.

“For me it’s about the art, like I hope that these pieces can stand on their own as successful pieces of art,” said Owenby. “But more importantly I am thrilled to have learned that it is touching the lives of people who would not normally been drawn to them.”

Admission is free and by appointment only. The show will run for at least two more weeks.