Panels of the National AIDS Memorial Quilt on display at Dunbar Elementary school on Dec. 1. (Photo by Allison Joyner.)

Dec. 1 is World AIDS Day. The event is an opportunity to educate people about HIV, support people who are living with it and commemorate those who died from AIDS-related illness.

On Thursday, Dec. 1 — World AIDS Day — the Atlanta Alumnae Chapter of Delta Sigma Theta Sorority educated residents of southwest Atlanta about the importance of PrEP — a medication that prevents people from getting HIV. In addition, they addressed myths about contracting HIV/AIDS during a display of the National AIDS Memorial Quilt. 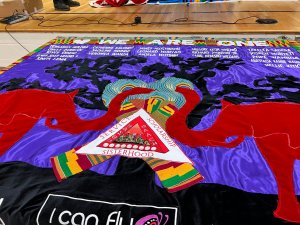 New panel of the National AIDS Memorial Quilt created by the Atlanta Alumnae Chapter of Delta Sigma Theta on display at Dunbar Elementary school on Dec. 1. (Photo by Allison Joyner.)

The AIDS quilt is a national project started 40 years ago that carries the names of over 100,000 people who have died from the virus worldwide on more than 48,000 panels.

The timing of the event is important. Although AIDS might not be at the forefront of people’s minds these days, it’s still a major threat — particularly in Black and LGBTQ+ communities.

“AIDS hasn’t gone anywhere. We kind of thought less about it once COVID came, said Andrea Morgan, president of the sorority.“However, AIDS is still prevalent in our neighborhoods.”

Two new panels created by the sorority were unveiled during the “Reflection, Celebration and Rejuvenation” program at Paul Lawrence Dunbar Elementary School.

“The kind of work that went into these beautiful panels from our sorors, the kids of our Delta GEMS and collaborators in the community shows how much Delta Sigma Theta cares,” Morgan said.

The panels were created by the chapter’s international awareness committee with members of the Delta GEMS program, which helps young women develop their college education and career goals. 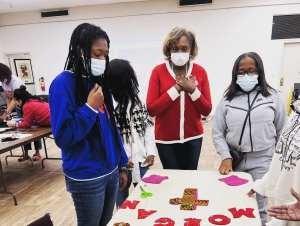 In addition to the unveiling, medical experts, community partners and featured artists came together to address the need for Blacks to protect themselves from STDs and STIs. The program highlighted the need for AIDS education and underscored the disease’s prevalence in the Black community.

“African American women make up 60 percent of new HIV cases, despite being only 15 percent of the population,” said Teri Cowan, a nurse practitioner for the Grady PrEP Program at Grady Hospital.

During the program, Cowan mentioned that men who have sex with men have a 50 percent lifetime risk of contracting HIV after age 30 and a 60 percent lifetime risk below age 30. Additionally, transgender women are at a greater risk of getting the virus not because of their sexual behaviors but by the growing number of sexual assaults that happen.

She also said that changing the way that people think about sexual health is how fewer African Americans can reduce the number of new cases and be informed about preventive measures to prevent them from getting the virus. 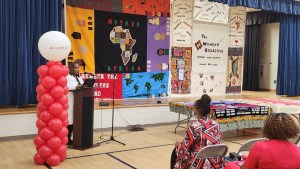 Pre-Exposure Prophylaxis or PrEP is an example of one of the treatments that can be used for sexually active people who is HIV-negative, regardless of sexual orientation or gender identity. The Grady PrEP program provides free PrEP treatments and STD and STI testing to those who live in Fulton or DeKalb counties, no matter if they don’t have health insurance.

“It’s an FDA-approved medication that prevents HIV but most importantly, it encourages people to know their HIV status,” Cowan said. To learn more about the Grady PrEP program, click here or call (404) 616-PREP.