The proposed rock quarry along the Chattahoochee River in Carroll County is slated to emit particles into the atmosphere during its operations 24 hours a day, 365 days a year, if allowed to open on a site across the river from south Fulton County. 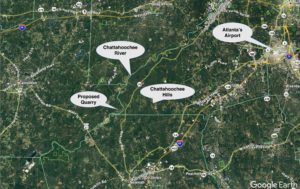 A proposed quarry in Carroll County would be built alongside the Chattahoochee River on a site across from Serenbe and the city of Chattahoochee Hills. File/Credit: Google Earth, David Pendered

Oct. 9 is the deadline for public comment on the air quality application the quarry’s developer, Green Rock LLC, has filed with the state Environmental Protection Division, part of the Georgia Department of Natural Resources.

A citizen group opposed to the quarry is busy drumming up opposition. A petition on change.org had 3,493 signatures at one point Wednesday evening, out of a goal of 5,000. The group’s Facebook page begins with this pitch that ends in a plea related to public health:

The opposition is aimed at a quarry proposed by Green Rock, LLC on a site of about 360 acres. The land is located along a bend in the Chattahoochee River where the counties of Carroll, Coweta, Douglas and Fulton come close together along the waterfront.

The air quality application that’s the current focus of the citizen group was submitted by Green Rock to the state’s Environmental Protection Division. The application is dated Aug. 24.

An affiliate of Green Rock provided this general description of the facility:

The application outlines the scope of emissions expected to be created by the mining of rock, crushing the material to aggregate, and having it hauled off by customers. Highlights include:

Wetlands located along the Chattahoochee River would be impacted by a proposed rock quarry, according to an application filed by the developer with the state. File/Credit: Brian and Shanda Cook