Ala. trade deal with Cuba could impact Georgia port; Fla. balks under pressure from governor 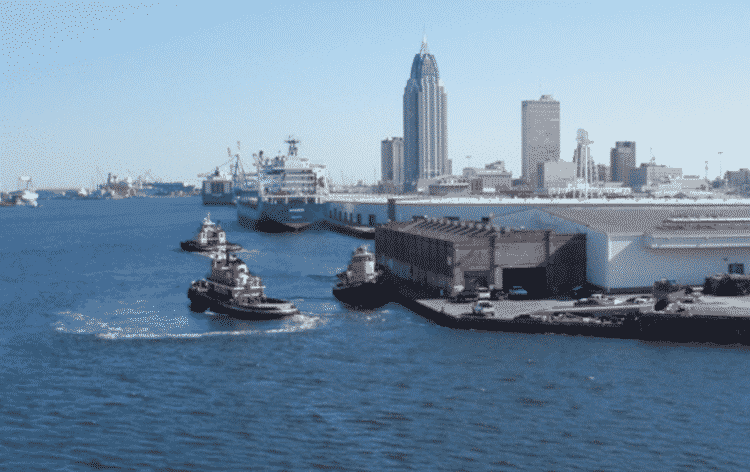 Cuba and Alabama signed a deal Thursday to explore opportunities to grow trade between the state port in Mobile and Cuba. A similar deal planned for two ports in Florida was cancelled following threats by Republican Florida Gov. Rick Scott to cut state funding to any state port that signed a deal with Cuba. 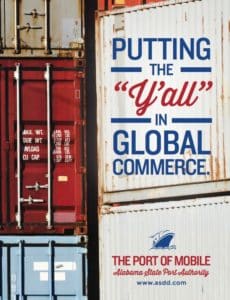 Alabama just signed a deal with Cuba to look for opportunities to boost trade between the port in Mobile and ports in Cuba. Credit: jjpragency.com

The impact on Georgia was not immediately clear Saturday. But implications for competition from Alabama are clear: The state port in Brunswick led the nation in trade bound for Cuba, according to a story posted in 2015 on savannahnow.com that cited research by The Miami Herald.

The port in Mobile is the 10th largest in the nation in total trade, according to a statement from the Alabama State Port Authority.

U.S-sanctioned trade between Alabama and Cuba is mainly poultry and forest products, according to the statement. The memorandum of understanding signed Thursday commits the two to extensive efforts to boost trade. Efforts are to involve:

Alabama’s top port official expressed great hope that trade between the U.S. and Cuba will increase.

“We are seeing increasing demand for normalized trade between the United States and Cuba, and it is our goal to foster relationships between the ports and their maritime communities to further changes in U.S. Cuban trade policy and facilitate improved ocean carriage services to the benefit of our shippers,” James K. Lyons, chief executive officer of the port authority, said in a statement. 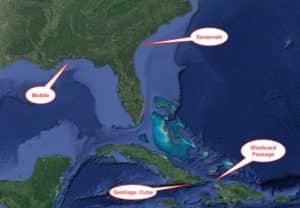 Cuba is expanding its port in Santiago, which is located near the Windward Passage, the trade route that links the Atlantic Ocean and Caribbean Sea. The U.S. Gulf Coast can be reached through the pass between Cuba and Mexico. Credit: Google Earth, David Pendered

The tone in Florida was dramatically different.

Scott threatened to cut off state funding to any port that signed a deal with Cuba, according to reports by miamiherald.com. One story related these three tweets from the governor:

Cuba was slated to sign deals with ports in Palm Beach, Ft. Lauderdale, and Tampa. The deals involving the East Coast ports were squashed, according to multiple published reports. The status of the deal with Tampa was unclear – readily available reports did not say if the deal had been signed or killed. 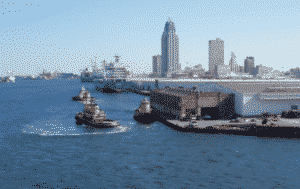 Cuba’s trade mission included visits to six port facilities, according to the council, including Houston, New Orleans and Norfolk. The delegation visited officials in Austin, Washington, D.C. The mission culminated with a conference Feb. 2-3 in Tampa that was hosted by the Virginia-based American Association of Port Authorities.

Cuba is getting help from China to expand its port on the southeast coastline, at Santiago de Cuba. China is said to be providing more than $100 million in loans to Cuba and the design-build development is being done by the China Communications Construction Company, according to a report in havanatimes.org.

The Santiago port will provide easy access to ports on the U.S. eastern seaboard, through the Windward Passage. Access to U.S. ports on the Gulf of Mexico could be reached via a route around the western tip of Cuba, or by shipping cargo from a port near Havana.