Alana Shepherd’s Moment was the ‘call from hell,’ launching her son’s recovery and family’s investment in a remarkable rehabilitative hospital 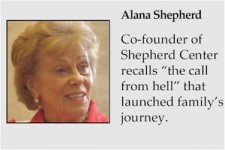 It was a Sunday morning, October 21, 1973. Alana Shepherd remembers this specific Sunday morning – not because it happened to be her mother’s birthday – but because it was the morning she received the “call from hell.”

“That’s the way every family describes it,” Alana told us. “And it’s true.”

The call was to inform Alana and her husband, Harold, that their 22-year-old son James had been in a life-threatening accident. James was a recent graduate from the University of Georgia and was on a backpacking trip around the world. While body surfing off a Brazilian beach of Rio de Janerio, he was thrust by a wave to the hard ocean floor and sustained a traumatic injury to his spinal cord – paralyzing him from the neck down.

The Moment Alana Shepherd received that heart-breaking call, her life changed drastically.
“It changes your life and starts you on a new course – of commitment, excitement, disappointments, worry,” Alana said.

The new course began immediately. Alana and her husband immediately flew to Brazil to be with their son by the next morning and stayed there for six weeks while he was hospitalized. They watched helplessly as James fought for his life – completely immobilized and on a breathing ventilator for three months. After six weeks, he returned home to the United States to Atlanta, where he spent three and half months at Piedmont Hospital.

As his mobility continued to increase, he relocated to a rehabilitation center in Denver, Colorado. An extensive six months of treatment later, James finally walked out of the center with only a leg brace and a crutch.

Although he had been fortunate in his recovery, he and others that had been in the Denver rehabilitation facility realized the need for something better and closer to home. They thought there needed to be a specialized treatment facility for spinal cord injuries in Atlanta.

“We thought, yeah somebody ought to do that – and suddenly that somebody became us, “ Alana said. “We found Dr. David Apple for medical director and there began our journey.”

Shepherd Center was founded in 1975 and consisted of a six-bed unit in an empty wing of an Atlanta hospital. The need for the facility was affirmed with its quick outgrowing of that space and a long waiting list for admission. In 1982, Shepherd Center moved to its location today on Peachtree Road, just north of Piedmont Hospital.

The lot was just under five acres and had been a sought-after location by chain restaurants and retail stores. However, Scott Hudgens, who owned the lot, insisted that it be used for a higher purpose. The vision behind Shepherd Center was exactly the profound purpose for which they had hoped. The new stand-alone building was built on the property as a 40-bed facility.

The Shepherds’ journey to build and operate the hospital soon consumed their lives. They strived to provide a place where other families that faced trying situations such as the one they had experienced could find expert care and a some sort of relief from their uncertainty and worry.

“As James says a lot of times: We have never had a meal to sit down together that we haven’t talked about the hospital – ever,” Alana said.

Those dinner discussions led to the incredibly impressive Shepherd Center as it exists today – a 152-bed facility with 1,600 employees at two different campuses in Atlanta. Last year, Shepherd Center had 965 admissions to its in-patient programs and 571 to its day-patient programs. Shepherd has served patients from every state in the United States, as well as 58 countries – and counting.

From first-hand experience, Alana knew that the families of the injured needed treatment as well. Shepherd Center provides various programs for family members of patients that educate them on their loved ones’ injuries, make them an integral part of their recovery and help them to cope with the life changes they will inevitably face.

These programs contribute to the fact that 97% of Shepherd Center patients return home to their communities. The national average for patients with similar injuries is only 76% – with the rest going on to assisted living or long-term care facilities.

“When we drive in today – all of say this – we look up and say, ‘Wow, how did this happen?’ ” Alana said. “And of course it happened by the hardest (of efforts), but it happened with the support of the community.”

As a private, not-for-profit hospital, the success of Shepherd Center relies heavily on community partnerships. One of the most influential community collaborations with which it was involved was the 1996 Paralympics Games.

“They weren’t even going to be in Atlanta and our board stepped up and said, ‘We will be the founding sponsor and we will make this happen’ and we did,” Alana said.

“It was new and different and very hard but the most rewarding thing of all – and because of that and the ADA, Atlanta is a much more accessible city than it would have ever been,” she said.

The mentality of stepping up and creating something for the betterment of others is what launched Shepherd Center and what will continue to expand its reach – regardless of difficulty.

Because the perspective of what is difficult in life is very different for those that have received the call from hell. Alana Shepherd and her family’s changed perspective allows them to make a difference not only in the physical recovery of their patients, but their emotional recovery as well.

“You don’t think that if you’ve had a spinal cord injury that you can water ski again or deer hunt again – but you can. You can also dive out of a plane if you really want to – and a lot of them want to.

“That’s the spirit that you hope you’ve given these people – to make a difference and encourage them to get on with their lives and be a part of their community wherever it may be.” 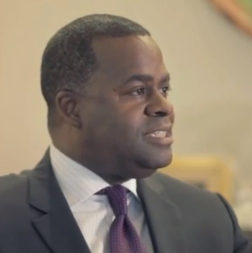 Next week in Moments: Kasim Reed, mayor of Atlanta, recalling his college decision that prompted a year of silence with his father.