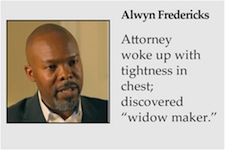 Alwyn Fredericks had his Moment a few months ago on a night that at first seemed much like any other. Then it got a bit more serious. After drifting off to sleep for a few hours, Alwyn woke up abruptly at 4 a.m. feeling tightness in his chest. His wife and children were all in a deep sleep.

Following the protocol he followed for a decade as a successful personal injury law partner at Cash, Krugler & Fredericks, Alwyn resumed his familiar role of investigating pain and injury – though this time, he was researching on his own behalf. He walked over to the computer and Googled the symptoms he was experiencing.

“It said if you’re on the computer researching chest achiness and tightness, you need to get up and go to the hospital,” he recalled in our accompanying HD Moments video.

He took the advice seriously, got up from the computer, woke up his wife and told her he was driving himself to Piedmont Hospital, which, fortunately, was only a few minutes from his home.

Medical professionals ran a battery of tests and found nothing of concern. A physician’s assistant mentioned there was one more test they had not given him yet, but said insurance didn’t like to pay for it. Alwyn said he’d cover the fees if the insurance company did not pay and requested the test. The results were life-changing. The CT angiogram found Alwyn had a congenital heart problem called an anomalous right coronary artery from the left main.

Simplified, this meant that Alwyn had an artery in his heart running in the wrong direction between the aorta artery and pulmonary artery. It was a condition he was born with and usually goes completely undetected until a Moment such as this – or worse.

“He told me, ‘You have what ‘Pistol’ Pete Maravich, the basketball player had – generally your symptoms are diagnosed on autopsy.’ ” The rarely diagnosed and fatal condition has the nickname “the widow maker.”

A native of Guyana in South America, Alwyn has always been active in sports. When his family moved to Canada when he was just four, he picked up an active interest in ice hockey and soccer, playing soccer in college for four years at York University. He recently picked up hockey again and joined a local amateur team after teaching his youngest son how to play. As an avid hockey player, Alwyn was likely a short time away from experiencing worse results on the ice.

Following the CT angiogram results, Alwyn saw a heart surgeon the same day and just over a week later, he underwent bypass surgery to fix the congenital heart defect.

The suddenness of his own condition provided a new insight for Alwyn – not only for the clients whose personal injury cases he managed at work – but also for others who were hospitalized alongside him.

“I wasn’t there because of anything I could control – I was born with my problem,” he said. “But it made me think of all the people that were there because they just didn’t take care of their body.”

While he and his wife knew he was fortunate to catch the condition early, they were challenged with also explaining the procedure and his condition to his children. The sudden stream of doctors, hospital visits, surgery and recovery time frightened them.

“In their minds, their dad is like Superman,” Alwyn said, pausing to collect himself as he recalled talking with his children following a cautionary call from their teachers. “It was tough for them – it was really difficult.”

Alwyn experienced a quick and full recovery and was back in the office in a few short weeks following surgery. He has resumed his active lifestyle and with interacting his kids.

“Now they are back to being themselves and happy – they always want to see my scar,” he said.

Now the scar serves as a reminder – not only of the Moment that could have ended Alwyn’s life and devastated the lives of his wife, children and law partners – but also of his return to his reign as “Superman” for his kids who celebrate his recent victory over fate and the widow maker. 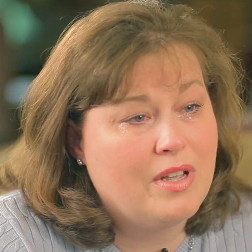 Next week in Moments: Brandi Helvey

Next week in Moments: Brandi Helvey, who found a deeper faith with her husband when their young son experienced a tragic accident on Christmas Eve 2010.