Three weeks ago, it looked as though famed film producer Tyler Perry had struck a deal to turn Fort McPherson into a new movie studio. In the eyes of many Atlantans it may have seemed like a done deal.

But at the federal courthouse in Atlanta, a legal challenge to that deal continues to be fought. Ubiquitous Entertainment Studios, which offered to buy 80 acres at Fort Mac last December for its own proposed movie studio project, says in a lawsuit that it’s getting shut out by the Tyler Perry deal. Mayor Kasim Reed has called its claims “garbage” and “outrageous.”

Unlike Tyler Perry, Ubiquitous Entertainment is not a household name in Atlanta. In an interview with Atlanta Business Chronicle, Daniel Meachum, the company’s founder and CEO, said he decided to take on this battle because of his strong sense of right and wrong.

“This is not personal,” Meachum said. “I don’t have any issues with Mayor Reed. I admire and respect what Tyler Perry has done. What Ubiquitous is trying to do is to create new Tyler Perrys.”

And like Perry, Meachum has his own strong ties to Hollywood. Academy Award-winning actor Denzel Washington, who starred in the movie “Remember the Titans” (largely shot in Atlanta), is a member of Ubiquitous Entertainment’s board. “I have known Dan Meachum for more than 18 years. He is a close friend, and I know that he has been working on the project for more than three years,” Washington said in a statement for this story. “As his friend and board member, I believe in Meach and this project. If given a chance, I know it will be extremely successful.” 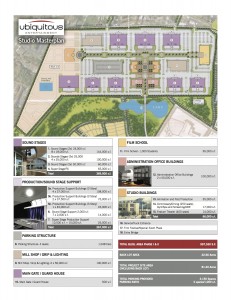 In a background paper prepared for the Chronicle, Meachum described the origin of his vision for his company’s proposed project at Fort Mac.

It was during the 1996 Summer Olympic Games when Meachum first envisioned the potential of Atlanta as a world-class entertainment center. Then in 2005, he saw how the film industry in Georgia and Atlanta was taking off.

“As an entertainment attorney and entrepreneur, I wanted to be a part of that growth, and my desire to bring a world-class facility for artisans to come and create and inspire future generations was reignited,” Meachum’s statement read.

“I envisioned a sprawling, tree-lined entertainment complex that would include 20 sound stages for film and television; a cutting-edge animation department; a state-of-the-art editing and post-production department; a major back lot; the world’s largest removable floor sound stage; and a visitor’s center welcoming our daily tourists to experience where the world of make-believe makes dreams come true.”

“A well-known accredited film school also would set up shop there and provide training, experience and education in all facets of filmmaking to students attending area colleges and universities.”

Rather than fencing off the 80 acres, a great concern that the surrounding communities have if Tyler Perry acquires the 325 acres, Meachum stated he wanted to welcome the community.

“We wouldn’t build a walled fortress to keep our neighbors out, but rather invite them in to visit the campus, dine in our commissary, watch a show in the performing arts center, and even find a job or their next career,” Meachum stated. “The surrounding community would benefit from the much-needed economic development, and the city and state would add millions to their tax rolls.”

During a recent meeting of the McPherson Implementing Local Redevelopment Authority (MILRA) with Reed and Perry both present, the mayor dismissed the lawsuit as “frivolous” and Meachum (without mentioning his name) as someone who was just suing to make a buck.

But Meachum has strong ties to some of Atlanta’s most powerful leaders and is not so easily dismissed.

In his recently published autobiography “Building Atlanta,” Atlanta builder Herman Russell devotes two pages to Meachum, explaining how he came to Atlanta to become the attorney for Concessions International, which at the time was owned by three pillars in the black community – Russell, the late Jesse Hill and none other than Felker Ward, the current chairman of MILRA.

Russell wrote that when Meachum left Concessions International “in 2000, he put out a shingle in Atlanta as a sole practitioner specializing in complex litigation, although he may be best known for the athletes and entertainers he has represented over the years, including actors Denzel Washington and Wesley Snipes, and five Atlanta Falcons football players, including Michael Vick.”

Although it is tempting to turn these lawsuits into a battle of differing visions by two movie powerhouses – Tyler Perry versus Ubiquitous and Denzel Washington – Meachum said that’s not the core point of his lawsuit.

“Our case is not about Ubiquitous,” Meachum said. “It is about the fairness of the process. It is for every interested party that wants to participate in the development of Fort McPherson.”

According to the Ubiquitous lawsuit that was filed on July 16, the company had been working on putting a proposal for a studio complex at Fort McPherson since 2011. It submitted an opening offer on Dec. 10, 2013, to buy 80 acres for $5.9 million. That offer was made after numerous meetings with MILRA officials of about what property would available and best suited for a studio campus.

On Jan. 26, 2014, MILRA responded to Ubiquitous Entertainment’s offer saying that it was not yet the title owner of the federally owned Fort McPherson property (a total of 488 acres).

At such time it became the owner of the property, MILRA would “inform UES and other parties who were interested in the property located within Fort McPherson by public notice,” according to the Ubiquitous lawsuit.

“We wouldn’t build a walled fortress to keep our neighbors out, but rather invite them in to visit the campus, dine in our commissary, watch a show in the performing arts center, and even find a job or their next career.” Dan Meachum

“Assured that it would be allowed to participate in an open, fair, and proper process to bid and potentially purchase the desired property, UES continued to communicate with MILRA …,” the lawsuit stated, and MILRA repeatedly said that potential buyers would have an opportunity buy the land only after it had been conveyed from the federal government.

During the spring, Reed met with Perry to give him a tour of Fort McPherson – hoping he would not move his studio complex out to Douglas County. Perry originally offered $30 million to buy the entire base.

“We flat turned that down,” said Ward during a meeting of MILRA’s board on Aug. 25. “There began the negotiating, which lasted several months. They are to pay $30 million for 325 acres.”

In response, MILRA and Tyler Perry Studios have called Ubiquitous Entertainment’s lawsuits against them “frivolous,” and have filed motions to have them dismissed. So far, U.S. District Judge Richard Story has not made any ruling and more motions continue to be filed.

Another contentious issue is that Ubiquitous said it provided proprietary information with MILRA regarding its development proposal, including site plan documents and a template for the movie studio. “UES, upon information and belief, has cause to believe that Tyler Perry is in possession of its site plans and drawings as a result of receiving them from MILRA,” according to the Ubiquitous lawsuit. MILRA, in its legal filing, denied that claim.

MILRA Chairman Ward declined to comment for this story because of pending litigation.