Isn’t watching a fall football or softball game always more about the players on the field than the ones on the sideline?

Unless you’re Peyton Manning (the only 4-time Most Valuable Player in the NFL), few fans will give attention to an injured athlete.

A hobbled player, though, can still demonstrate the power of desire to shape a team – and herself.

Meet Sarah Grace Stafford of Decatur, and find out how coaches like Vince Dooley (of University of Georgia football) and Marynell Meadors (WNBA Atlanta Dream) harness the spirit of injured players to keep their team on track and boosted.

Disclosure: Sarah Grace plays on the Crushers, a middle-school team whose roster also includes my daughter.

Last month, the preseason email from the coach noted Sarah Grace’s injured food that would keep her out for six weeks. 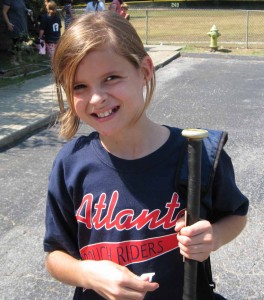 What kid would only show up all season to play, at most, two games? Surely the Crushers would be one girl down.

But that underestimated Sarah Grace, 11, a sixth grader at Renfroe Middle School.

Sarah Grace, her mother Hildreth Stafford recalled, played soccer for five years. Her last year “was a bad experience. The coaches were extremely competitive, and it was all about winning.”

“Most of my friends were playing it, and my dad played it a lot, so I wanted to try it out,” she said.

Sarah Grace found a home at catcher / right field, with an occasional appearance at second base.

The magic and mystery of a team sport is how a collection of individuals can come together as one. Sarah Grace is very independent. She knew none of her teammates when she started, opting for the Crushers over another team with her Renfroe friends.

“I like softball because none of the people on my softball team goes to my school and I love meeting new people!” she said in an email full of exclamation points, all caps and ending with a smiley emoticon.

“It is fun playing against my school and my friends…. It is such a fun and positive atmosphere and I love it. I could never ever part from them!” 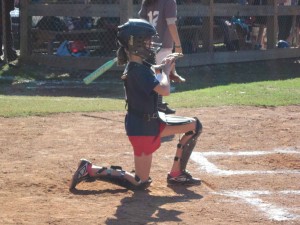 That self-assured nature led her to summer camp in North Carolina for two weeks. That’s where she tripped over one of her cabinmate’s shoes and injured her foot badly enough that her doctor ordered a walking boot for three weeks.

Soon, softball signups came around. She never considered stepping aside. She still felt like an important cog in the Crusher machine.
“I can still cheer and be there for my team if they win or if they lose,” Sarah Grace said.
In more prominent teams, coaches must absorb and leverage every twist and turn – of ankles and games – with much more at stake. Dooley and Meadors both value the spirit of a Sarah Grace on the sidelines of the football field or basketball court. That spirit infuses the team’s performance. The team infused the player’s healing.

“We just had a reunion of the 1971 UGA team, and the captain was offensive guard Royce Smith, an All-American who got hurt in the Auburn game,” Dooley said.

“He was not able to participate in the Georgia Tech game, which was a big one for us, but he was going up and down the sidelines in a cast on his leg, more of a morale cheerleader.”

“An injured player can be a positive influence when it’s a situation like Royce Smith,” Dooley said. To keep the casualties from sinking spirits and the team, he always drilled them hard in what they could do safely – upper body work for those with leg injuries, running for those whose arms and torsos were hurt.

The Atlanta Dream has battled this summer through key injuries to vie in the playoffs. Marynell Meadors kept guard Shalee Lehning and forward/captain Sancho Lyttle on the active roster despite injuries.

Most pro teams have limits on the number of players they can carry, and with her team struggling this season, Meadors made the strategic decision against giving these two spots to healthy players.

“It gives them more confidence in coming back,” Meadors said. “The rehab process is really tough to go through, so keeping them around the team and the game—in that routine– really helps both the team and the player.”

As for Lyttle, who suffered a brutal concussion in a game on July 3, “I moved her back to the active roster because her presence in the locker room was that important,” Meadors said. “After that, our chemistry started to develop. Even though she wasn’t playing, she was still that leader. She kept everyone together.”

Injured athletes like Sarah Grace, and Peyton Manning for that matter, can reveal their coaches’ values.

A study by Sarah A. Halbert of Miami (Ohio) University – the school known as the “cradle of coaches” – noted that coaches who focus on unequal recognition, intra-team rivalry and punishment for mistakes send a message that injured players have no value.

Coaches who focus on skills, effort and cooperation also create the most positive atmosphere for injured players. This was certainly true of the Crushers.

“I spend a tremendous amount of time working with my players on the mental side of the game,” said coach Pete Bartlewski, also the bench coach for the varsity baseball team at Druid Hills High School. “We are able to talk about strategies to overcome anxiety, minimize negative thoughts, and refocus on the execution of the skill. When you look at the numbers in baseball and softball, statistically it is a failing sport… My quote to players is, ‘You cannot control the outcome but you can control your approach to the game.’ “

The Crushers opened their season earlier this month with a lunch-to-dinner doubleheader on a broiling Saturday at Glen Orth Field at the First Baptist Church of Decatur.

They won their first game on a walk-off double by eighth grader Carter Beckwith. They came from behind in the second game with a 15-run open inning.

Watching from the stands was Sarah Grace’s dad, Shawn Stafford. He played football at Davidson before a severe knee injury in his junior year ended his career. He went on to have a half-dozen surgeries.

It’s easy to see where Sarah Grace gets her gumption, and what she could take from this season.

“I’ve always tried to focus on the positives of my participation in the sport rather the negatives of the injury,” he said. “I’ve also compared many subsequent painful or difficult experiences to the pain from that knee injury. I’ve said to myself many times that whatever pain or difficulty I was facing now could not be worse than what I already went through with my knee.”

In the dugout, Sarah Grace felt the frustration of a competitor: “I am mad that I can’t play.” Still, for five hours, she did what she could for the Crushers.

“She celebrated individual achievements, picked her teammates up when they struggled, and even reminded me of rule change that we were not following — allowing us to adjust and be in compliance before the next pitch was thrown,” her coach said. “Talk about a student of the game.”

When it was over, Sarah Grace hobbled across the diamond, in the line of Crushers high-fiving their opponents. In this team demonstration of sportsmanship, she stood out as the leader.