Another era of Underground Atlanta: The city beneath the city

Since Underground Atlanta changed ownership late last year, the folks working there have pushed to re-establish its name and make the underground city a hub of art and entertainment.

One key effort is a new initiative adopted in August called the Underground Roots Program, which provides rent-free space to 70 local artists and entrepreneurs along Lower and Upper Alabama Street.

The businesses are open on a rotating schedule to accommodate all 70 folks, with storefronts and cart space available to display their goods.

The idea here is to offer artists and budding businesses “a place to try out new ideas in a super low-risk environment,” Creative Director Kris Pilcher said. 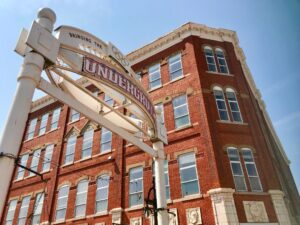 The move costs around $250,000 to offer the space free-of-charge until January, with Underground and tenants willing to pay extra to cover the bill.

“For us, it’s really an investment in our long-term goals of reinventing Underground and re-establishing its name and its place in the community,” Pilcher said, “So, this is the best way we could spend that money.”

Pilcher, born and raised in the city, joined the team when current owner Shaneel Lalani purchased Underground. He says he saw it as “[an] opportunity to really activate the most historic area in Atlanta.”

The history of Underground Atlanta is a long one.

Back in 1837, Atlanta was selected as a depot for a new railroad system. As the city grew, as did the traffic, a series of viaducts were built. After several years, the 12-acre, five-block stretch lay forgotten until the 1943 construction of Peachtree Fountains Plaza, which sits at the entrance of Underground.

Throughout the years, the space had many different owners and went through periods of high popularity and major inactivity.

That turbulent history, once which most Atlantans are familiar with, brings unique benefits and challenges for bringing the space back to life. 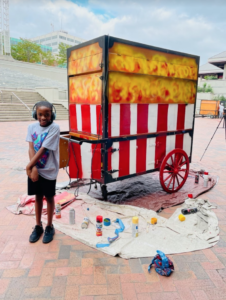 Pilcher added that the space has one huge thing going for it — the novelty.

“Everyone around the country knows about Underground Atlanta; it’s sort of legendary,” he said. “It’s a place that’s super unique. So we know the city wants to see it succeed, and we personally want to re-establish it as this entertainment-core in the heart of downtown.”

On the other hand, Pilcher acknowledges that past mismanagement and inactivity at Underground posed safety concerns.

“With previous owners, there were some safety concerns because we are at the center of a bustling city,” he said. “But we’ve been working really, really hard to change that perspective. We’ve hired security officers that are on-site 24/7, we put in new lighting … and most importantly, we’re getting a continuous stream of traffic back to the area, which hinders any sort of crime.”

The future is looking bright for this new era of Underground. Between the new Banksy exhibit, three music venues and the new businesses, Pilcher noted that between 1,500 to 2,000 people visit Underground per day on the weekends.

Folks are also invited to attend the new Night Market every Thursday from 6 to 10 p.m., featuring art, music and food.

Pilcher and the rest of the team have a vision for the future of Underground Atlanta, and they hope you’ll come to see for yourself.

“Underground is the absolute center of downtown Atlanta,” Pilcher said, “It’s always been lively; it’s always been an interesting kind of eccentric community. So we want to stay true to those roots. That’s why we started this Roots Program.”