Nine miles due east of the school where she became a worldwide hero for talking down a gunman who had fired at police, Antoinette Tuff  showed up Sunday at the church where she has said her pastor’s voice urged her to be “anchored.”

At The Way The Truth & The Life Christian Center, Tuff didn’t say much at all – a contrast to the scene five days earlier at Ronald E. McNair Discovery Learning Academy, where as the school’s bookkeeper she remained anchored in poised chatter that helped persuade alleged armed gunman Michael Brandon Hill to give himself up. 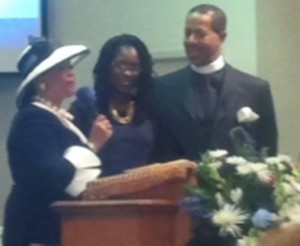 Deborah, Antoinette and Ulysses Tuff at the Aug. 25 service at The Way The Truth & The Life Christian Center in Decatur. Antoinette was married to the nephew of Ulysses Tuff, and continued attending the church after the marriage dissolved last year.

Though she did not speak during the packed three-hour service near Covington Highway outside of I-285, it felt strangely reassuring to be in her presence. I was there because I wanted to find out more about how she pulled off such courage in the face of impending evil.

I live six miles north of Tuff’s school, and was horrified momentarily last week at the possibility that another Newtown shooting might be unfolding. A few miles away, my older daughter’s high school went on lockdown.

Pretty much all the news out of our schools and government in DeKalb County, Georgia, has been terrible lately. Tuff’s school and the rest of our public schools, including the two my daughters attend, face possible loss of accreditation because of the school board’s mismanagement. The governor sacked most of the board members. A former superintendent and chief operating officer of the system face trial on corruption charges. Magnet programs are getting slashed, teachers face continued furloughs.

Our county CEO is under indictment for 14 felonies, and last week a special grand jury recommended investigating several other former DeKalb officials, including his predecessor.

Right when our county was sorely lacking heroes, along comes Antoinette Tuff.

On Sunday, she returned to the nondenominational Christian church that has anchored her for more than a decade and where everyone knows her as “Marie.” The anchoring voice belongs to Apostle Ulysses Tuff, who is also her uncle by marriage—a marriage that ended last year, but she remains in the congregation. They celebrated the way she looked death in the eye and didn’t flinch, the way that her character forced a tragedy to end in peace. 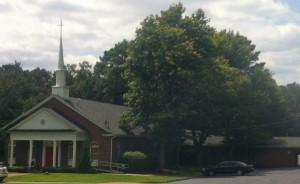 The Way The Truth & The Life Christian Center in Decatur, Ga., near Covington Highway and I-285, is the home church of Antoinette Tuff, the school bookkeeper who talked down an alleged gunman at a school attended by 800 children. No one was injured, and Tuff has credited her church for helping “anchor” her during hard times.

“You’re not going to know about the solidity of the relationship until God orders your steps into what is called madness,” said Apostle Tuff in Sunday’s sermon. “She had a way to escape. She was given a way to escape.”

“She could have said, ‘Yes, Lord, Thank you.’ But that didn’t show you’re anchored,” Apostle Tuff said. “Because when God calls you out on assignment you must finish the assignment even if it requires your death.”

“We bless Marie for showing Jesus, because Jesus can’t be seen until there is someone human who can show him.”

Many of you may not believe in God or in supernatural occurrences. But it’s hard to argue that what happened at McNair wasn’t miraculous, at least not in the original Latin sense of the word: wonderful, strange, marvelous. Police say Hill slipped into the school behind someone with access to a locked entrance, held Antoinette Tuff hostage and opened fire on police surrounding the building.

In interviews with news outlets from around the world, Tuff has repeated her account of speaking compassionately to the young man and describing her own personal troubles, eventually talking Hill into laying down his weapons and giving himself up. No one was injured.

On Sunday, she gave no sound bites. The organ played, the congregation filled to capacity as 300 called in response.

To a host of television cameras and reporters, visiting politicians and church mentors sang her praises.

U.S. Rep. Hank Johnson (D-Ga.) read proclamations honoring both the church and her.

“God set you up for a time as this,” said DeKalb County District 3 Commissioner Larry Johnson. “Now the world knows the bookkeeper.”

Parishioners seemed very warm and hospitable to guests covering the story. With nine cents in my pocket, I was caught in a wave of church members headed for the tithing table.

“Just tap the bag,” a woman behind me told me.

I did. Moments later, she handed me a five-dollar bill.

“I felt called to give your this,” she said.

I tried to refuse.

“Just receive it,” she said.

Later she gave me four more dollars. “I had to give you all of it,” she said.

I could see how if that was my church for 10 years, I would learn to expect the unexpected. I could see how Antoinette Tuff might get used to behavior that would unsettle the rest of us. 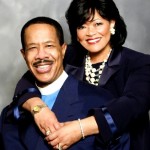 Ulysses and Deborah Tuff of The Way The Truth & The Life Christian Center in Decatur, Ga., the home church of Antoinette Tuff.

It was also clear that this is a community that values deep preparation to counter life’s surprises. Many churches like to schedule class topics months in advance, and keep services to a set duration. Not Tuff’s church.

Repetition, going through Scripture slowly, deliberately, grow deep roots in faith, said Forrest Tuff, son of the pastor. That way, when things go bad, you know better what to do.

He said his father’s approach goes beyond re-stating the Gospels to “building a foundation.”

“He takes a time to continue teaching you to anchor you in the fundamentals of Christianity to love your fellow man,” Forrest Tuff said. “Sometimes he’ll spend three sermons on one chapter in the Bible.”

One of his most fundamental lessons is perseverance.

“In order to grow closer to Christ, you must endure,” Tuff said. “You must persevere.”

Antoinette Tuff has a great catchphrase that we in DeKalb County need to hear. In an interview last week, Antoinette Tuff said the most frightening moment of the Tuesday ordeal was seeing watching Hill reload. She said she got through it by reminding herself to “push past the pain.”

Her aunt, Ulysses Tuff’s wife, taught her that. But the aunt said her hero niece had another quality all her own that made all the difference.

“Compassion is not taught. It is,” said Deborah Tuff. “It comes from God. You have to have it on the inside of you to be able to show it. You can’t teach a person to love. It has to be there.

“And even though voices were talking to this man in his head, she reached down and touched his heart.”

Antoinette Tuff will always be the person who kept 800 children alive by sharing her story. She is inspiring people all over the world to push past pain, including residents of DeKalb County who have a lot of that right now.

We have to push past the pain, at least that’s the moral imperative I took from the service on Sunday. That and nine dollars to pay forward.

Previous Article
Jay Smith was at his desk, absorbing bad news about his father, when a boss defined his Moment
Next Article
Judge gives Morris Brown until Sept. 6 to present new reorganization plan