This week, Atlanta Public Schools (APS) announced have installed Evolv Express weapons detection systems in their high and middle schools as an added layer of safety and a more efficient way to screen students’ belongings.

“One of the things that we saw in the past with our old walk-through metal detectors was it took a long time to get people in and was also pretty invasive because it required going into every bag and searching inside which was a lot,” said Ronald Applin, Chief of the Office of Safety and Security for APS.

Used at public event centers like Mercedes Benz Stadium and the Georgia Aquarium, the Evolv Express can distinguish between a weapon and other metal objects, reducing the risk of misidentifications and improving efficiencies. 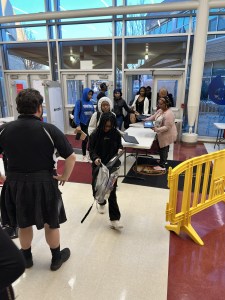 “[Students] can walk through the device and a person looking at a screen determines if anything is detected,” Applin said. “If the device triggers, it’ll redirect them to another table where they go through a more thorough search.”

Paid by funds provided by the CARES Act and surplus funding from last school year’s budget, APS spent over $2.5 million to install the entrances of 21 schools in their district.

“I think one of the benefits of this device is that it takes a lot less manpower to have a high level of efficiency,” said Meredith Littles, Officer for APS’s Office of Safety and Security.“That way, schools can utilize personnel and other key points in the morning,”

Applin told SaportaReport that the devices, installed at the schools’ main entrances, reduce students’ time outside the building, especially during cold or rainy weather.

“It’s a lot more efficient but at the same time, we’re getting a level of comfort that everyone is being screened,” Applin said.

The schools designate teachers and staff members to operate the device before classes begin.

“We’re not new to having a security system or metal detectors at the entry but this particular one really leverages technology in a different way and has made our process more efficient while also giving us knowledge that it is looking for what we should be looking for,” said Dr. Adam Danser, principal of Maynard Holbrook Jackson High School.

Danser said the Evolv Express was installed at the school before winter break.

“I think that kind of higher level thinking of what new technology may be out there to help at the school is critical so I’m appreciative of that,” Danser said.

When asked about the success of the new devices, the school system said that it is too early to tell and that he has yet to receive any comments from parents.

“I think it’s good to work with a district that cares about the safety of the children and they were able to get this project up and running quickly,” Littles said.