Many of those who participated in the program, including APS Superintendent, Dr. Lisa Herring, Atlanta Board of Education District six Vice Chair Eshé Collins, principal of the Henry Louis “Hank” Aaron New Beginnings Academy, Dr. Zawadaski Robinson, Director of Communications and Executive Director of the Atlanta Braves Foundation, Danielle Bedasse, and Aaron’s widow, Billye Aaron, tried to answer the question “what’s in a name?”

“The power of a name, the purpose of a name, and today, the highlight of a Hall-of-Famer,” Herring said. “A record-breaker, a humanitarian, a civil rights legend, and a GOAT.”

Bedasse agreed with Herring’s assessment. “As a mother of four I’m acutely aware of the importance of a name,” she said. “A name carries with it not only a tribute but a likeness and a responsibility to honor the past. It signifies desired characteristics and a promise and a hope for the future.”

Last year, the board formed a school-naming committee to select options to change the academy’s name.

“we solicited community feedback, student feedback and considered public comments documents from across the district,” Collins said during the program.

She added that after considering the formal submissions, articles and personal histories of thought leaders throughout the capital, the board recommended that the academy be renamed in Aaron’s honor. The board unanimously voted to support the recommendation and the new name was adopted.

Response to that solicitation came in the form of formal submissions and personal histories. After careful consideration, the board recommended — and ultimately unanimously approved — the name change.

“For us,” Herring remarked, “our scholars who are served daily and for those who drive and capture the name, what Hank Aaron represents for Atlanta Public Schools in this moment, perseverance, courage in the face of adversity, bravery, strength, giving it your all.”

“A student-centered school of opportunity for academic growth, social/emotional learning, college and career readiness and success in the 21st-century global economy,” said Robinson about the academy. 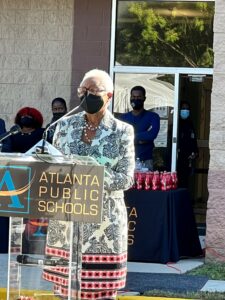 Philanthropist and widow of Hank Aaron, Billye Aaron, gives remarks during the unveiling ceremony for school in her husband’s honor.
Credit: Allison Joyner

The academy will provide academic instruction, restorative practices, trauma and therapeutic-informed practices for all the students in the city of Atlanta and Atlanta Public Schools.

“It’s hard to imagine a better name for this school or a better way to honor Mr. and Mrs. Aaron’s investment in youth and education,” Bedasse ended her remarks.

“It is also here in the representation of our scholars, that they know who [Aaron] was,” Herring said. “It is important that they understand what he stood for and it’s important that we acknowledge that the imprint he has left on his family, to his town, his team and his country, is what allows us to stand today to make certain that [his] name continues to live here in the city of Atlanta.”