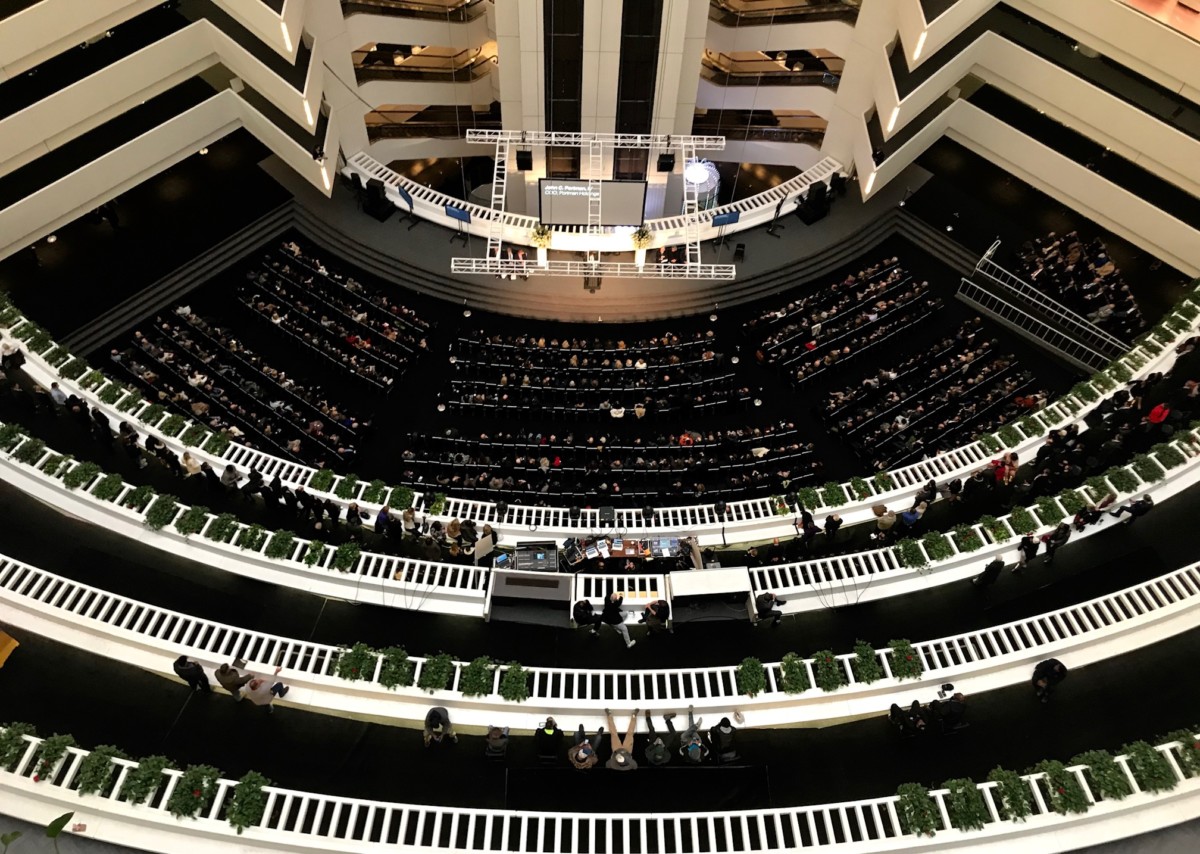 The venue was the atrium of AmericasMart 3, one of Portman’s many creations. The setting displayed Portman’s unique design style – the glass elevators, the hollowed out interior of the building, the magical play of light interspersed with the intricate, yet amazingly clean lines that defined the space. 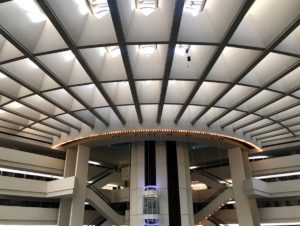 It was his longtime friend – former Atlanta Mayor Andrew Young – who said he rarely heard Portman speak of religion or church. But the spirit of creation was integral in every one of Portman’s designs.

“It looked like he turned the world into a cathedral,” Young told the standing-room only crowd who had gathered in the expansive atrium. “I look around here, and it’s a cathedral of commerce.”

The two-hour celebration of Portman’s life actually demonstrated that his legacy lives on – through his dramatic skyscrapers, his colorful paintings, his sculpture, his furniture and of course through his companies and his large family.

Almost every speaker remembered gems of wisdom that Portman had shared over the decades. In a video that was shown early in the program, people also got to hear from Portman himself.

“We are building a world for people to live in – to lift them up from the mundane,” Portman said.

Jeff Portman, who heads AmericasMart, spoke of how his father had created a global marketplace by building the largest facility of its kind in the world. 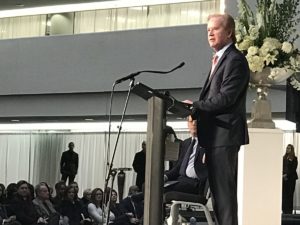 “No matter where you are in the world, people are more alike than they are unalike,” said Jeff Portman, recalling the words of his father. He believed in a “culture of caring, a business environment that is inclusive, welcoming and affirming.”

For the elder Portman, AmericasMart “was a laboratory for innovation.” “He called it the house of creativity; the house of imagination,” Jeff added.

Portman was not someone who stood still. He was constantly dreaming new ideas and living life to the fullest.

“How we live our lives is determined largely by how we see the world,” Jeff said. “For all his 93 years, my father was in the world and of the world – working in every measure of his being – making it kinder, more beautiful.”

Atlanta was his primary canvas – designing and developing more than 14 blocks that includes the Merchandise Mart, Peachtree Center, the Atlanta Hyatt Regency, the Westin Peachtree Plaza, the Marriott Marquis, the Atlanta Cancer Society building, the three AmericasMart as well as SunTrust Plaza.

And of course Portman made his mark throughout the country and the world – Detroit, San Francisco, New York and Asia – especially Shanghai, China. 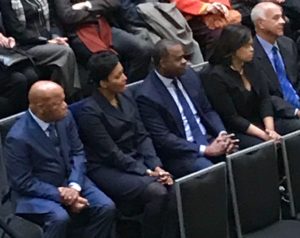 Grandson John Portman IV said that when he was asked to name his favorite building, he simply answered: “The next one.”

“He had us believing he was going to live forever,” shared his son, Jarel Portman. And that could be true given the many Portman sayings, such as: “Always recognize beauty in its many forms. Nothing in nature is unattractive.”

Sometimes it was not easy to be Portman’s son. His second oldest son and namesake – Jack Portman – followed his father’s footsteps, studying architecture at Georgia Tech, becoming an architect and joining his father’s architectural firm – John Portman & Associates.

“As a father, he was an amazing guy,” Jack Portman said. “He could be really difficult. He had a very high standard. He was very dogmatic in his approach of how he was a father.”

“He transferred to diplomacy in his later life,” Jack Portman said. “He was an amazing leader for all of us.”

And his touch extended far beyond his family.

One of his closest friends and colleagues, Mickey Steinberg, to know Portman when they were both at Georgia Tech, and he eventually joined the firm that Portman had founded with a Tech professor (Steinberg said Portman had turned him down, but the professor hired him). 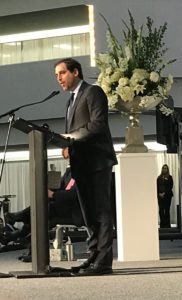 Steinberg worked with Portman over a span of more than five decades – except for a stint with Disney and Sony in the 1990s.

“It’s been the most interesting, challenging and the most wonderful career you could possibly imagine,” Steinberg said on Friday – also recollecting special phrases Portman had shared with him. “Never impose; always expose.” Let a problem expose the solution.

“He was never arbitrary,” Steinberg said. “He had a reason for everything he did ­– down to the smallest detail.”

“This is an incredible legacy,” Steinberg said. “John Portman was my boss, teacher, mentor, collaborator, my leader, and when necessary, my Rabbi. Most importantly, he was a close and valuable friend.”

Mohsen Mostavi, dean of the Harvard Graduate School of Design, published a book about John Portman in 2017 titled: “Portman’s America and other Speculations.”

“It’s hard to convey the sheer talent and the daring contribution to architecture” that Portman brought to the profession, Mostavi said. “He was one of the true masters of 20th Century architecture” creating masterpieces that would have been impossible to design before the age of computers.

Mostavi said he especially admired Portman’s two homes – the one in Atlanta and the other on Sea Island – which he called Entelechy I and Entelechy II, respectively. The definition of Entelechy is the realization of potential. 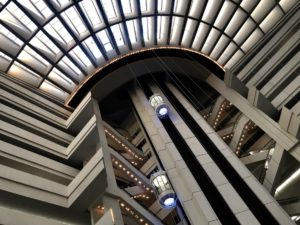 Portman was able to perfect the interplay between inside and outside space – bringing nature indoors, Mostavi said. He hollowed out the inside of buildings and created a spectacle, a theater indoors.

Or as Mayor Young aptly described – “a cathedral.”

Robinson recalled when he and Portman attended the funeral of Coca-Cola executive Sam Ayoub in 1997.

“I have to be truthful, he didn’t like funerals,” Robinson said, adding that Portman wanted to leave the service early. They did stay till the end, when Portman explained why he didn’t like going to funerals: “I believe life is about the living.” 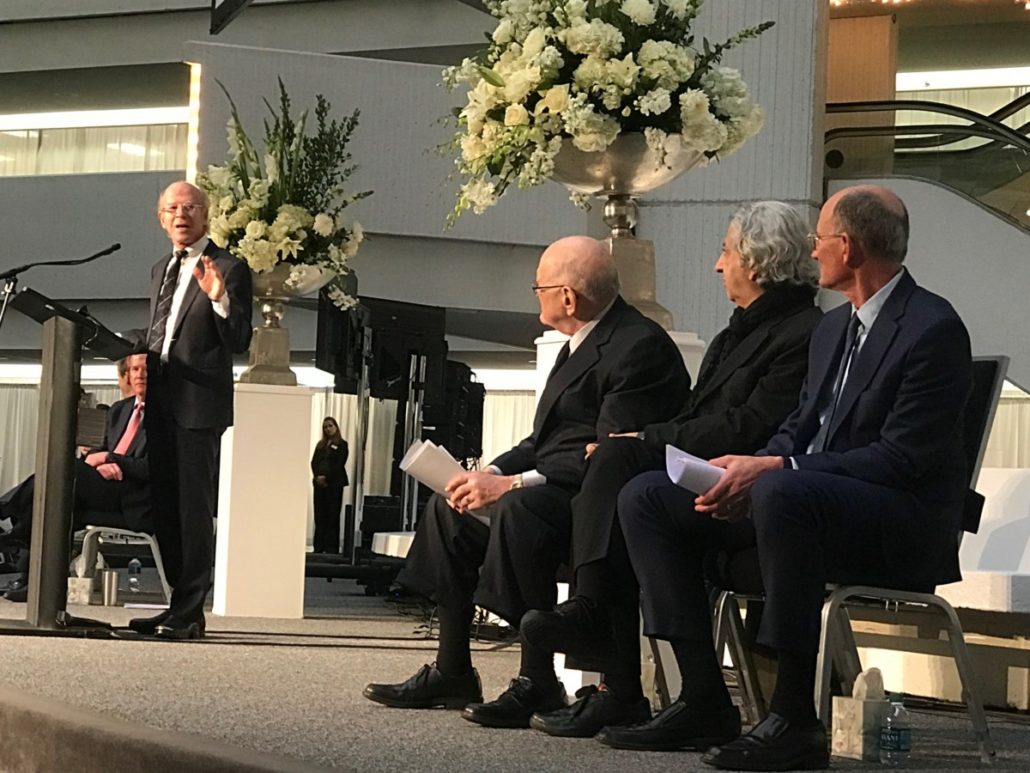 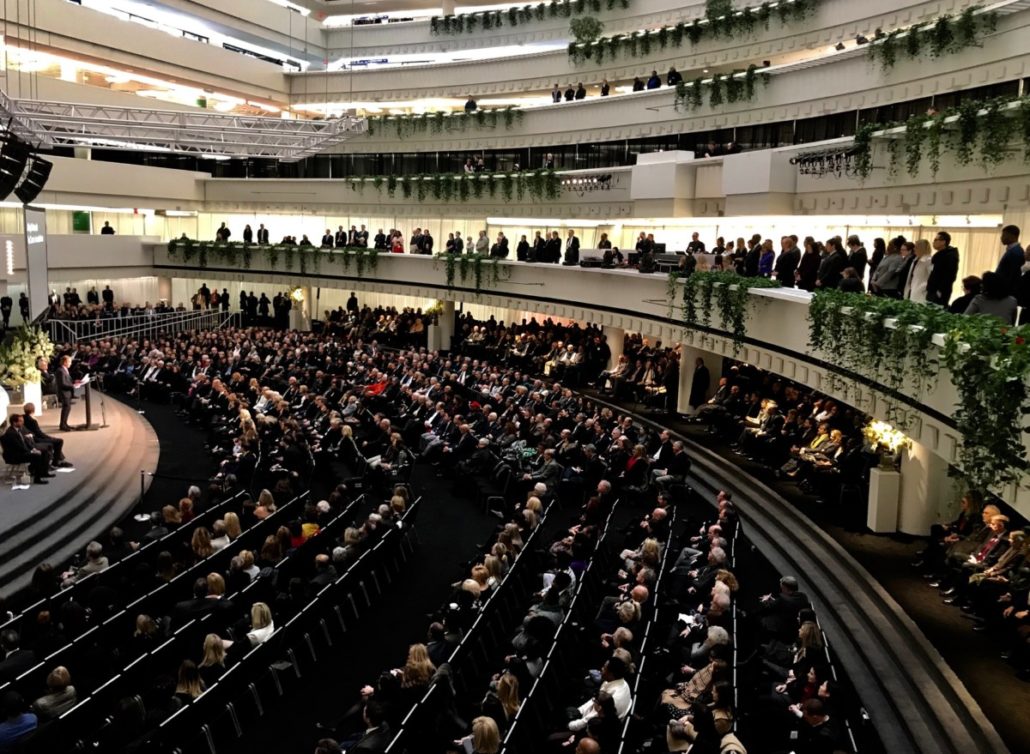 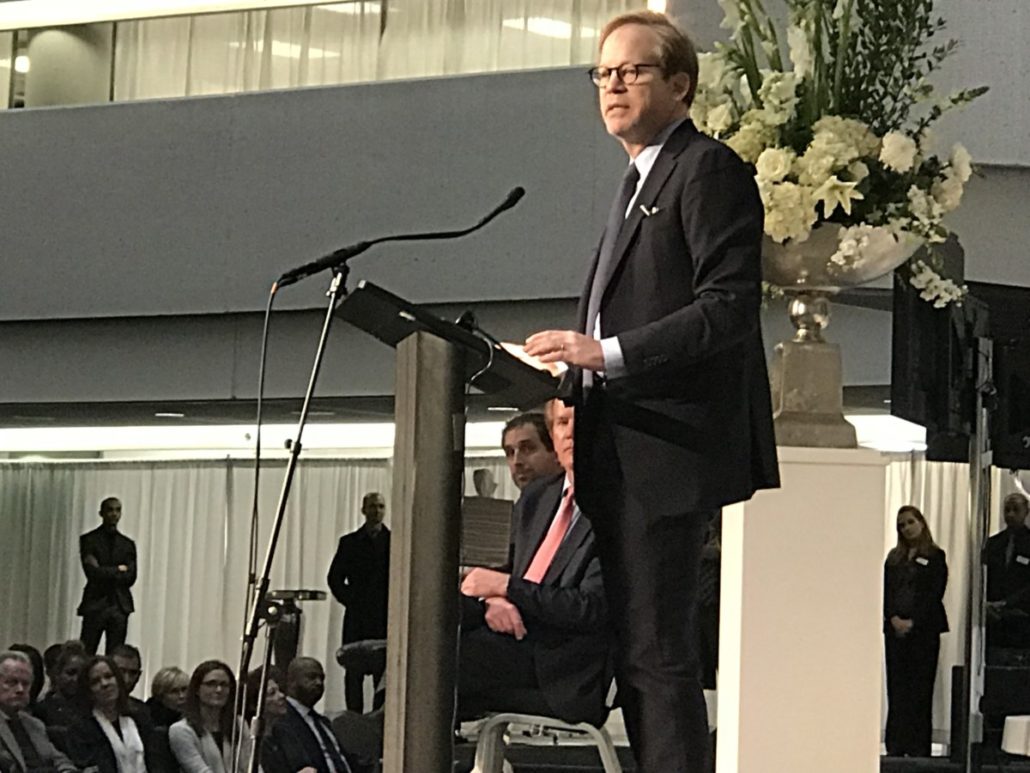 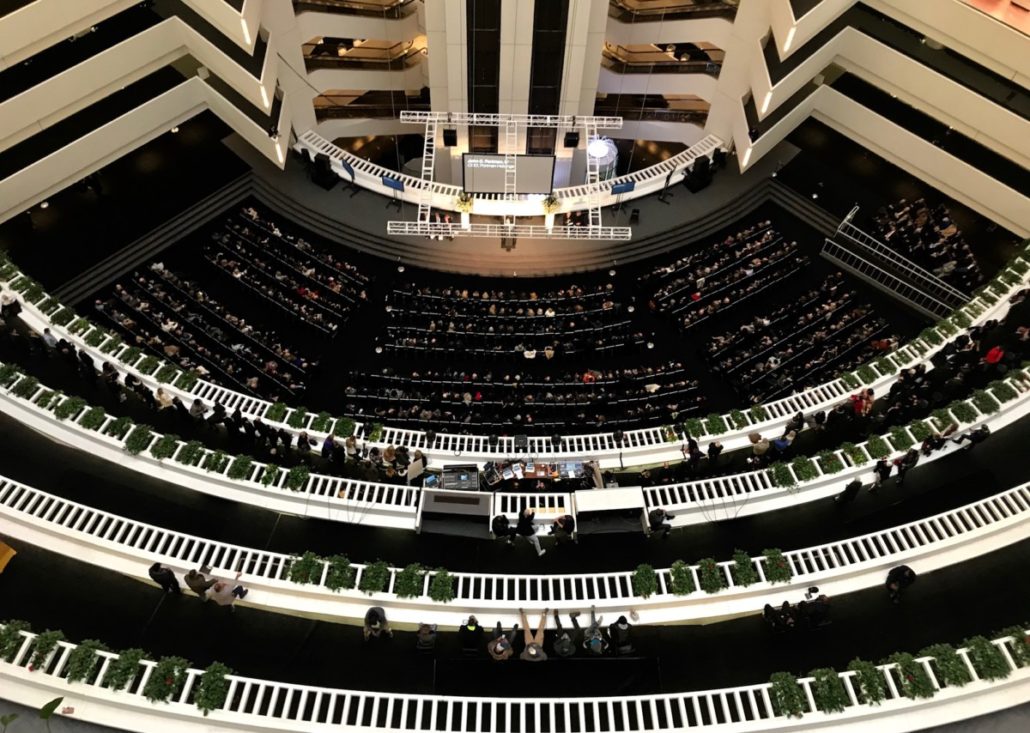 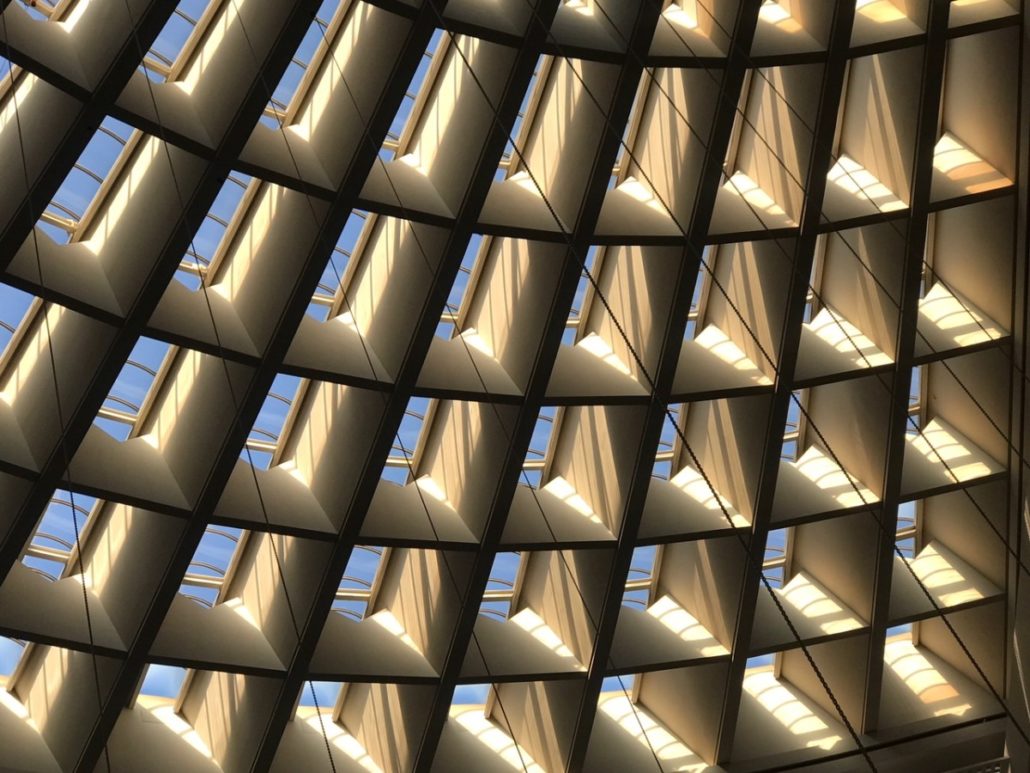 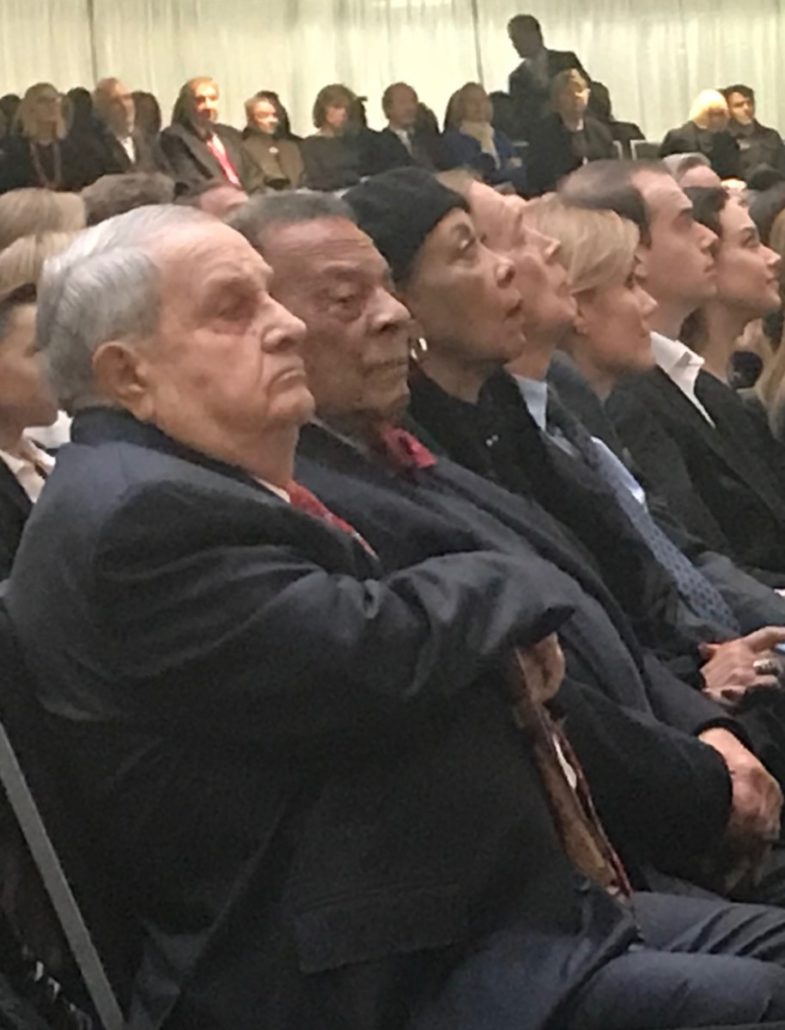 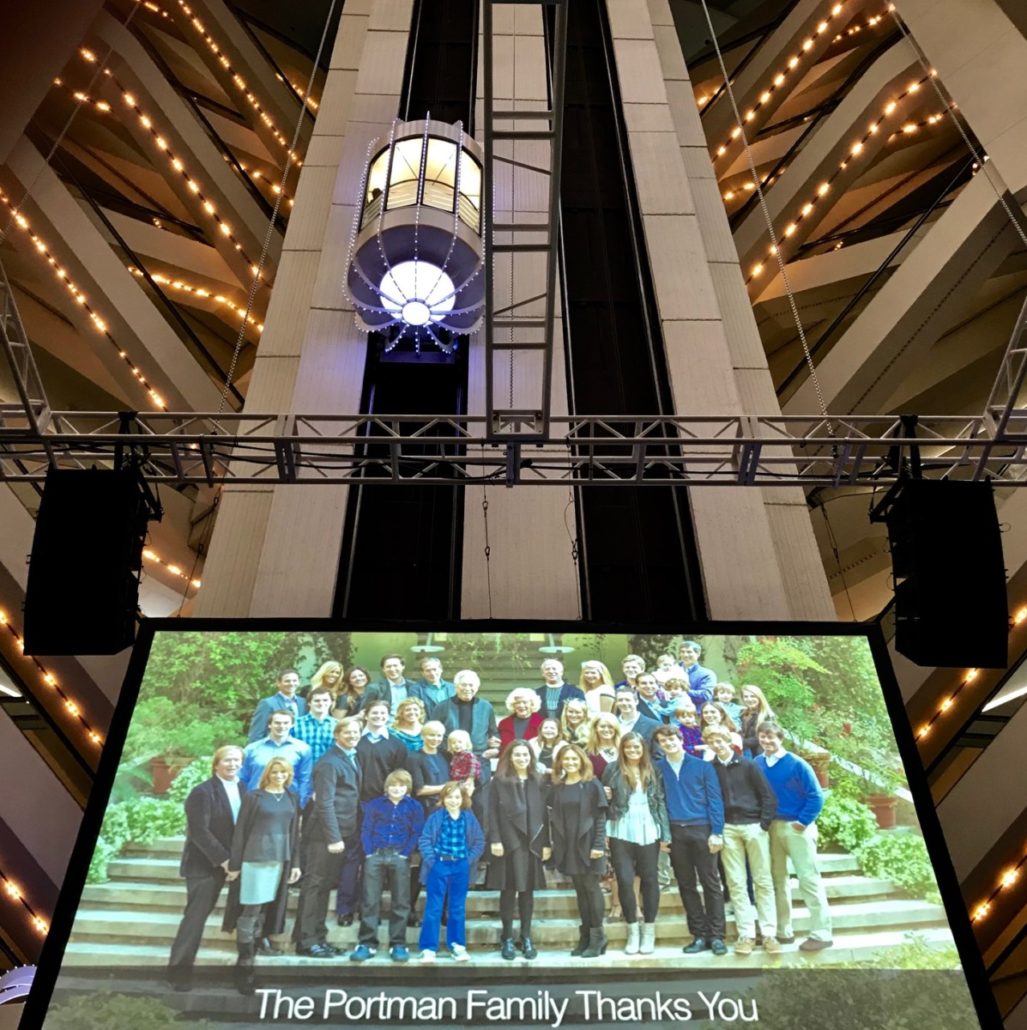 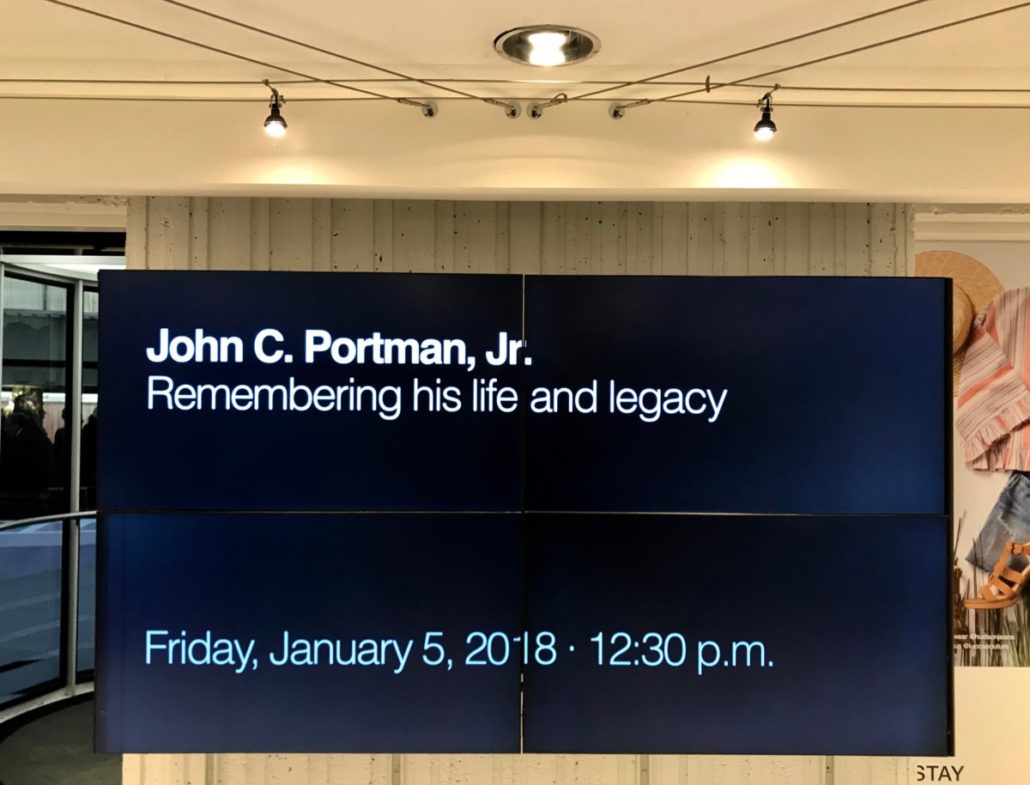